Roger Stone, a man of many bad names

Image of the week: A close advisor to Donald Trump, and a self-professed 'dirty trickster', Stone was the latest to be swept up in the Mueller investigation 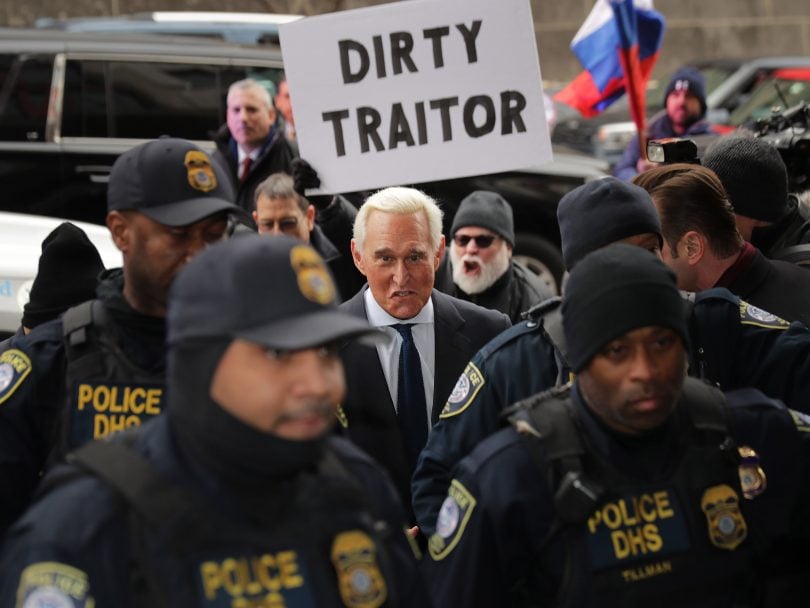 Over the years, political operative Roger Stone has been called plenty of names: a “dirty trickster” (by many people, including himself), the “lord of mischief” (from Weekly Standard writer Matt Labash) and a “stone-cold loser,” according to Donald Trump, circa 2008. But it is Stone’s relationship with the U.S. president that may finally result in his downfall. The veteran Republican strategist and advisor—infamous for low-blow campaign tactics and having tattooed the face of Richard Nixon between his shoulder blades—became the latest high-profile arrest to result from the Mueller’s investigation into Russian interference in the 2016 presidential campaign. (It seems Trump decided Stone wasn’t such a loser after all: the two have an on-again-off-again friendship, and Stone has been a close advisor to Trump.) The allegations against Stone—obstruction, witness tampering, lying to the House Intelligence Committee—ultimately question whether he helped leak sensitive Democrat emails hack by Russian agents, pushing Trump to electoral victory. Stone is not the biggest player in this endless investigation, but his mere presence has brought Nixon’s Watergate scandal to the forefront of people’s minds, no doubt aided by the fact that, when Stone pled not guilty, he waved his hands in Nixon’s V sign. He may be called plenty of names, but he draws the line at “crook”.

FILED UNDER: Image of the week Roger Stone