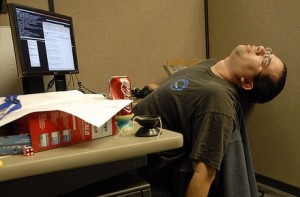 More than half of full-time university students in Quebec work while attending school and more than 40 per cent of all undergraduates work more than 20 hours weekly says a new study by the Fédération étudiante universitaire du Québec, a provincial lobby group that wants lower tuition.

On top of that, more than twice as many full-time students aged 20 to 24 in the province work part-time jobs than students did in the 1970s.

The workloads are hurting their educations: 43 per cent of full-time undergraduates say that their jobs have negatively affected their studies and 30 per cent say their jobs mean they’ll take longer to finish. It’s worst for PhD students—six in 10 say work forced them to prolong their studies.

It’s not just students in Quebec who are putting in long hours between classes. According to the 2011 Canadian University Survey Consortium study 56 per cent of undergraduates in Canada work. The average number of hours is 18 per week. Nearly a fifth (18 per cent) work more than 30 hours weekly. One third of working students report “a negative impact on their academic performance.”

The latest research also builds on a November 2010 report put out by FÉUQ that said employment income accounts for more than 50 per cent of the average full-time student’s income in Quebec.

Predictably, FÉUQ is using the results of both studies to argue against a tuition increase that will take effect this fall. The hike will see tuition for in-province students rise by $325 a year to $3,793 in 2016.

It’s easy to dismiss FÉUQ’s concerns–the province has the lowest fees in the country. But the fact that so many students are working so much suggests many are already at the breaking point.

It also rebuts the claim by Quebec politicians that the increase would return tuition to 1968-9 levels, adjusted for inflation, which is what finance minister Raymond Bachand told the National Assembly.

The claim that today’s students are paying less than past students has also been a favourite of the Conference of Rectors and Principals of Quebec Universities, which represents administrators.

Perhaps tuition was indeed more expensive in the 1968-9s. But in the 1970s, students could afford to work less in coffee shops and clothing stores—and more on their studies—than students of today.