In the face of challenges, Canada's business schools adapt 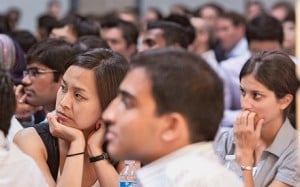 Peter Thiel’s career is the stuff of business legend. He co-founded PayPal and was the first outside investor in Facebook, paying future CEO Mark Zuckerberg $500,000 for 10 per cent of the company back in 2004. When the social networking giant held its IPO earlier this year, Thiel took home $640 million after selling off part of his stake. Since then, Facebook shares have lost half their value, but Thiel still managed to recently pocket $400 million after a regulatory lock-up agreement for insiders expired. In other words, while just about everyone else lost money on Facebook shares, Thiel made out like a bandit. It pays to get in first.

Thiel’s extraordinary vision and willingness to go against the grain—he also bet against the U.S. housing market prior to 2008—are qualities many business school students no doubt hope to emulate. However, they may be disheartened to learn Thiel isn’t a big fan of M.B.A.s, or any post-secondary education, for that matter. Ever the contrarian, he argues we’re now in the midst of an “education bubble.” Students, he says, are throwing away their money on university when they could be using the cash to start new companies and develop new technologies. His controversial 20 Under 20 program in the U.S. pays 20 university students $100,000 each to drop out of school and focus on building the next Apple or Google. “Rather than just studying, you’re doing,” the Thiel Fellowship’s website tantalizingly promises.

Some incensed academics have pointed out that Thiel himself holds two degrees, in philosophy and law from Stanford University, and he taught a class there last spring. Plus, not everyone can expect to become the next Steve Jobs. But others say he has a point. “Business schools are way overdue for a wake-up call,” says Mihnea Moldoveanu, the associate dean for the M.B.A. program at the University of Toronto’s Rotman School of Management—one of several Canadian schools that’s rethinking the traditional M.B.A. approach. “And for reasons that go way beyond what Thiel talks about.”

The tough questions come at a time when the cost-benefit analysis for getting an M.B.A. is no longer straightforward for many students. Historically, applications to business schools spike when the economy struggles, as people look to upgrade skills and prepare themselves to take advantage of a recovering job market a couple of years down the road. But recent data from the Graduate Management Admissions Council suggests this may no longer be the case: more than two-thirds of participating full-time M.B.A. programs reported a decline in applications last year in North America, Europe and Asia Pacific. That’s despite a global economy that remains in deep trouble. Some would-be M.B.A. candidates are simply calculating that the pricey degrees may not be worth the money. “The recession has been quite deep and quite long,” says Moldoveanu. “So it’s not clear that you will be out of the recession in two years. In fact, things might actually be worse.”

Further complicating matters is the fact that some top companies are increasingly bypassing business schools as they hunt for the best and brightest. They’re no longer interested in people trained in traditional fields like finance and marketing; instead, they want employees with advanced analytical and problem-solving skills. “Firms like Apple and Google engage in sophisticated problem-solving in fuzzy domains,” says Moldoveanu, adding that, in some cases, it’s no longer easy to determine what businesses such firms are actually in. “What they have found is that it may be easier to pick and choose talented people—with backgrounds in engineering, economics, philosophy or computer science—and just select among them those that are willing to take their problem-solving skills elsewhere.”

Some M.B.A. programs have sought to level the playing field by offering specialized programs. York University’s Schulich School of Business, for example, now offers 19 different specializations, ranging from arts and media administration to health industry management. A new specialization in global mining management was added just this year. But Moldoveanu says that Rotman decided to go in the opposite direction. After much deliberation, the school decided to reorient its entire curriculum around core skills such as “real-time problem-solving” and so-called “soft skills” like the ability to communicate ideas clearly. The idea is to prepare students to work in any field. Beginning this fall, students will be taught not through standard case studies, where tough decisions faced by corporations are rehashed, but with “live” cases that managers and executives are currently trying to solve. “These are cases generated by actual problems faced by actual businesses right now,” Moldoveanu says. As for the soft skills, Rotman now offers an integrated self-development lab, an optional program that allows small groups of students to work closely with faculty to hone their presence and powers of persuasion. Students are videotaped and then given personalized feedback. “It’s massively intensive,” says Moldoveanu. “It’s the equivalent of a shadow curriculum in the first year.”

University of British Columbia’s Sauder School of Business is undergoing a similar reinvention. It’s replacing its eight specializations (and 10 sub-specializations) with four broad career tracks: business innovation, consulting and strategic management, product-service management, and finance. Murali Chandrashekaran, the school’s associate dean of professional graduate programs, says the changes were 18 months in the making. They reflect a recognition that traditional approaches to business training no longer seem relevant in the wake of the 2008 financial crisis (which gave M.B.A.s a bad name) and new thinking about the role of corporations in the global economy. “Increasingly, the realization was that M.B.A. grads weren’t going to be working only with businesses, but would thrive at the intersection of government, business and civil society,” Chandrashekaran says.

Though the Richard Ivey School of Business at Western is not planning any big shakeups this fall, dean Carol Stephenson notes that the school made significant changes to its curriculum back in 2005, and it has done a lot of work on leadership since the 2008 financial crisis. “We never really went the specialization route,” Stephenson says. “We are going to graduate people who have skills, but also the capacity to lead.”

It’s not just Thiel who is raising questions about the value of an M.B.A. these days—particularly when it comes to the question of creating the country’s next generation of entrepreneurs. Closer to home, the co-founders of a Canadian project called The Next 36 are attempting to augment the university educations of a select few lucky candidates—36, to be exact—by giving each of them access to $80,000 worth of venture capital financing, business and market research resources as well as mentorship from some of the country’s top businesspeople. “Both programs are built on the premise that entrepreneurs learn best by building ventures, and that it’s worth devoting extraordinary resources to young people with extraordinary potential,” says Claudia Hepburn, the co-founder and executive director of The Next 36. “This is not a model that any business school can compete against.”

Maybe not. But that doesn’t mean business schools aren’t listening and responding accordingly. “I take all the critics of higher education very seriously,” says Moldoveanu. “I used to be a CEO of a public company, and as a CEO you learn to be very paranoid.”