After weathering the Great Recession, can Canada avoid a debt crisis?

When central bankers dropped interest rates during the financial crisis, finance ministers leaned too hard on household debt. That trend may finally be changing. 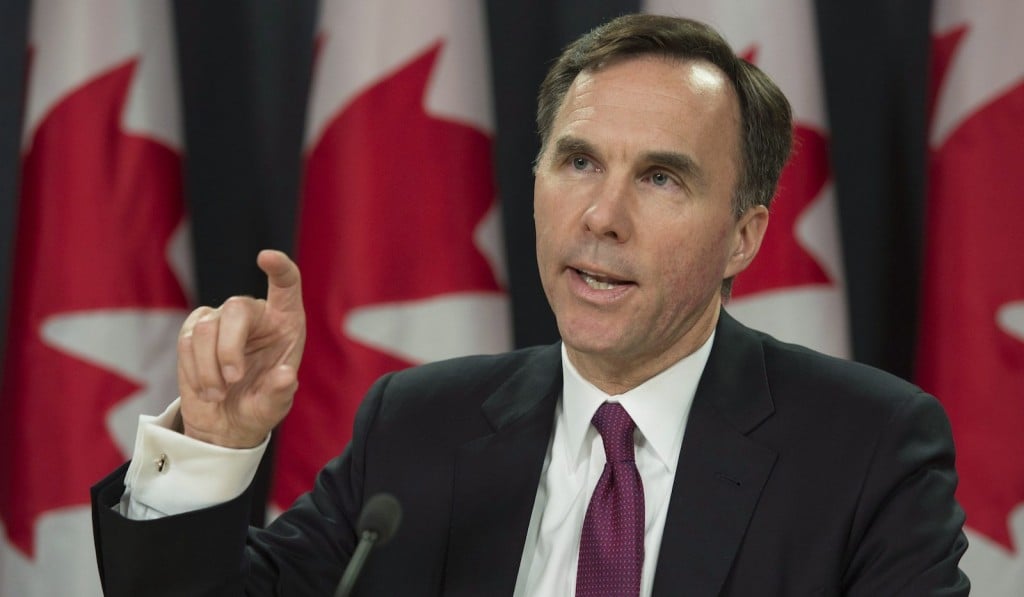 Minister of Finance Bill Morneau is trying to balance soaring household debt levels against the need for strength in consumer spending. Morneau in Ottawa, on Friday, Nov. 20, 2015. THE CANADIAN PRESS/Adrian Wyld

It is a testament to Apple craftsmanship that the “c,” “r,” “i,” and “s” keys on my laptop still function. There is no two-syllable word I have typed more since the the latter part of the previous decade than “crisis,” usually preceded by “financial.” And since I haven’t stopped writing about the financial crisis, I missed that it is already time to commemorate one of the great moments in economic history.

Bloomberg News, the Financial Times, the Globe and Mail have all published 10th-anniversary articles related to the crisis this month, deciding to date the Great Recession to the early tremors, rather than the Big One, which was the collapse of Lehman Brothers Holdings Inc. on Sept. 15, 2008.

Call me a heretic, but I think it’s still 9 AC (After the Crisis). It wasn’t until the Lehman bankruptcy that the world really changed. Still, there is no harm in thinking about the lessons of that catastrophe. In Canada, authorities appear to understand better than they did before that banks can’t be trusted to police themselves. There is a broader recognition that there is more to economic policy than managing inflation and balancing the budget. Yet, as a country, we are probably more vulnerable than we were a decade ago because we failed to take seriously the most important lesson of the crisis: the dangers of housing mania and the perils of household debt.

Financial regulators around the world now accept that they must be more aware of their surroundings. Central banks, finance ministries and banking regulators in major economies make a concerted effort to talk to each other to share information and coordinate policies. That’s good. Also, central banks learned their mandates are bigger than inflation.

When the Bank of Canada cut interest rates in 2015 to offset the collapse of oil prices, it was worried about more than a blow to gross domestic product; it was also thinking about what mass firings in the oil patch could mean for the financial system. Rather than waiting to find out, the central bank opted to make it easier for unemployed oil workers to service their debts. Financial stability also factored into the Bank of Canada’s decision to raise interest rates last month.

If you hang around the angrier parts of Twitter, you will have heard that central bankers such as Poloz are failures and losers. They dropped interest rates to zero, created the equivalent of trillions of dollars to purchase bonds, and the global economy is only now showing signs of vigour. So clearly, lower-for-longer did nothing but inflate asset-price bubbles, these people say.

That criticism is unfair. The failures are the politicians who clung to their austerity blankets, robbing their economies of stimulus. The Republicans who control the U.S. Congress and Germany’s Angela Merkel are the most guilty, but former prime minister Stephen Harper was also among the leaders who refused to err on the side of growth, even though the International Monetary Fund said Canada could have afforded greater spending.

Justin Trudeau and his Liberals sensed a change of mood around the sanctity of balanced budgets and promised to use Canada’s fiscal room to jolt a stagnant economy. There is reason to question Trudeau’s execution, as his spending commitments have been slow to show up in calculations of gross domestic product. But he had the right idea.

Unlike the years before the crisis, the global consensus now is that governments should be agnostic when it comes to fiscal policy; too much debt is problematic (Greece, Spain, etc.), but it can take more than a balanced budget to inspire business confidence and get executives to spend. Corporate profits piled up in Canada and elsewhere, yet business spending sagged. John Maynard Keynes wasn’t wrong—the government has a positive role to play in the economy. The election of Trudeau suggests most Canadians agree. There are some delinquents, of course: opposition leader Andrew Scheer said during his campaign to lead the Conservatives that he would balance the budget within two years of becoming prime minister. His reason: Because.

Harper might have thought he was controlling debt, but in effect, all he did was transfer it to Canadian households. After declaring victory over the recession in 2010, Harper set a path to balance the budget in time for the 2015 election. That decision forced the central bank to leave interest rates at ultra-low levels because the economy never achieved serious momentum. Monetary policy only had a modest impact on the broader economy. However, consumers responded exactly how the textbooks said they would when offered a once-in-a-lifetime opportunity to borrow for almost nothing. The fatal flaw in Canada’s response to the crisis is that offer stayed in place for far too long.

Finally, the economy is on a hot streak: employers have been adding jobs steadily for a year, and growth is running at an annualized rate in excess of three per cent. But much of that is contingent on consumer spending, which is being financed by record levels of debt. Wages, meanwhile, are barely keeping pace with inflation.

The U.S. was experiencing a similar dynamic 10 years ago. Rather than a collapse in banking, the economists Atif Mian and Amir Sufi argue the Great Recession was actually caused by a collapse in consumer demand: highly indebted households stopped spending, which caused everything to unravel.

Something similar could happen in Canada—ask Finance Minister Bill Morneau. “International research has found that highly indebted households cut back their spending to a greater degree in response to declining house prices than those with lower debt levels,” he said in a letter to the House finance committee this month. “Declining spending among these households results in feed-back effects on the broader housing market and economy, which could lead to further declines in consumption and economic activity.”

It’s a relief to see the finance minister talking this way. When central banks dropped their interest rates to zero, they knew they would be triggering a real-estate frenzy. They were willing to take the risk in oder to give the broader economy a jolt. But they went down this road with the understanding that finance ministers would do their part. Post-crisis economics introduced the public to macroprudential policy, or more finely tuned fiscal and regulatory measures meant to restrain risky behaviour in specific markets.

Canada has deployed its share of macroprudential policy, but the measures have been either tentative or reactionary. Housing prices were way off the charts in Vancouver and Toronto before local authorities sought to do anything about the problem—and when they did, they chose policies that would be the least controversial, not the most effective. At the national level, popular drivers of housing demand such as the capital-gains exemption on the sale of primary residences and various sops to first-time homebuyers remain in place.

There is at least an awareness of the problem, and there are signs of something that looks like resolve to avoid making it worse.

Morneau, for example, rejected advice from the House finance committee to do even more to help first-time homebuyers. “Additional government support for home ownership, especially in the context of housing markets experiencing rapid price growth and restricted housing supply, are likely to be counterproductive,” Morneau wrote. “Policies to further boost homeownership by stimulating demand would exert more pressure on home prices, with little or no positive impact on housing affordability.”

It’s unfortunate that attitude didn’t take hold sooner. Statistics Canada will release second-quarter growth numbers next week, and most economists expect another strong number. But that data also likely will show the extent to which Canada’s economy is riding a wave of household debt. That will make it difficult to stop thinking about the possibility of a crash because waves turn to troughs, eventually.