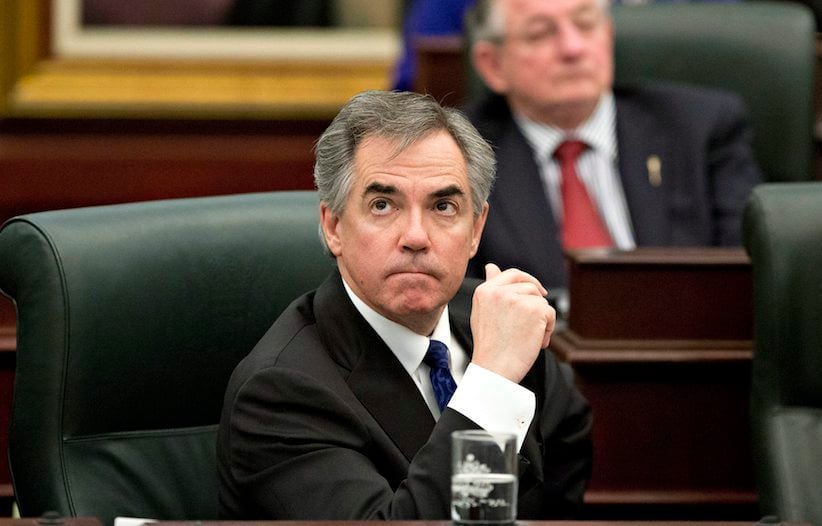 It’s the day after budget day in Alberta, and we’re still slowly absorbing the details of some large changes in the province we knew. The province is expected to post a large deficit, and depending on how you run the numbers, could either soon be out of savings or soon be further in debt.  The province no longer has a flat income tax, it’s added a new health levy (which looks a lot like another income tax) and, if you stretch your definitions a bit, it has increased the tax on carbon fuels via a new gas and diesel tax of four cents per litre. However, without a doubt, the largest story of the Alberta budget—the driver of the deficit, the large cuts in spending and the need for increased revenue—was the change in resource revenue in a province which has historically been highly dependent on them.

How deep is the drop in resource revenues? Massive would be an understatement. As you can see from the graph below, Alberta is feeling the second big drop in the value of a key source of resource revenue in a decade—what happened to gas royalties after 2009 has now hit oil. Over the last five years, resource revenues have averaged more than $9 billion per year, the 2014 forecast revenues of over $9 billion for the 2015-16 fiscal year, and in this year’s budget they are forecast to be less than $3 billion. Ouch. 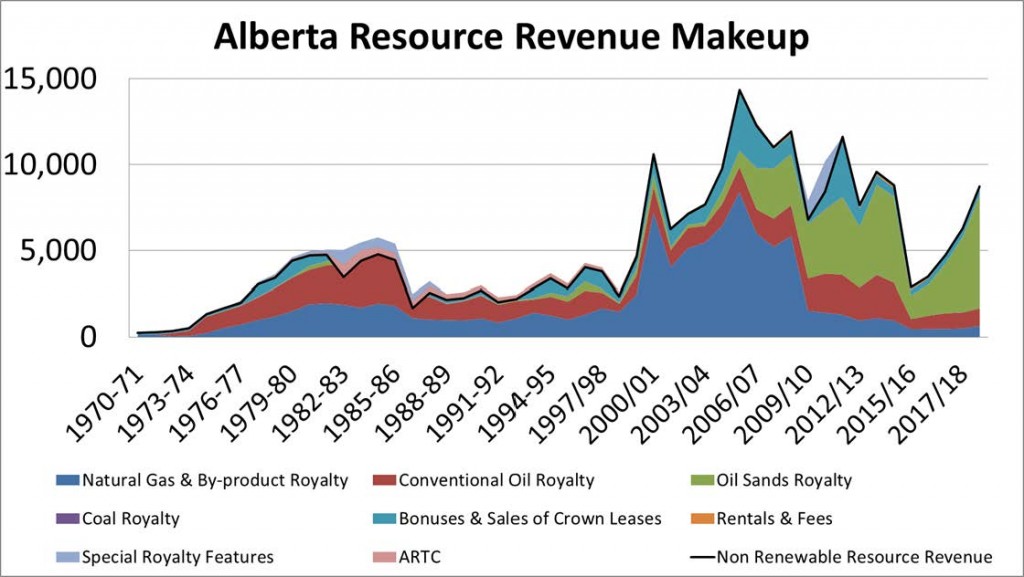 Looking at nominal revenues only tells you part of the story.  If you look at real, per capita revenues (adjusted for inflation and population growth), and include other revenues, the depth of the drop seems, perhaps, less extreme. In the graph below you can see that while resource revenues have dropped, total government revenues per capita are still forecast to be at levels higher than most of the previous 40 years in Alberta, although the year-over-year change in total, per-capita revenues is one of the steepest drops we’ve seen. 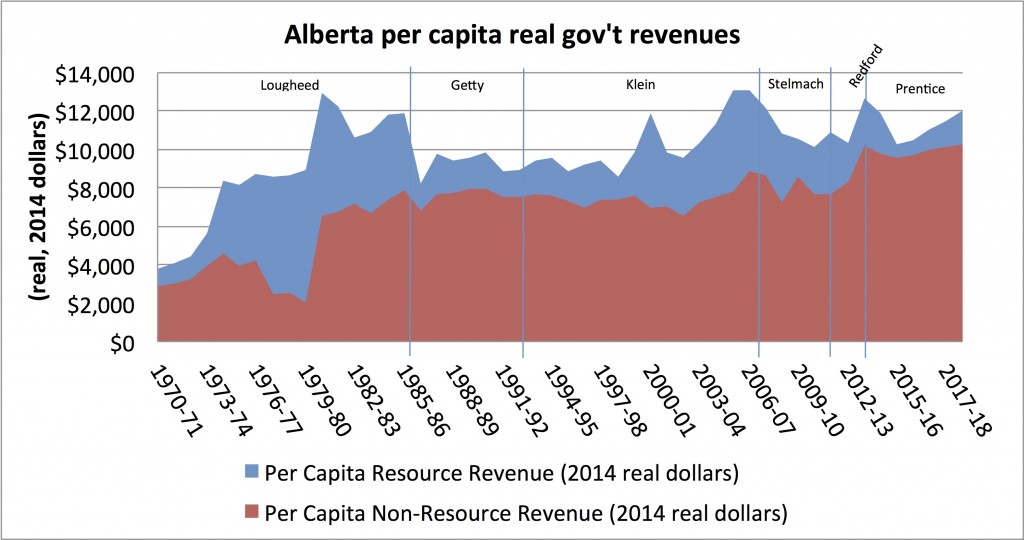 The same chart, showing only resource revenues, captures the relative situation today in terms of the value of Alberta’s resources. On an inflation-adjusted, per capita basis, resource revenues over the next five years are forecast to be less than half of what they have been over the preceding five years. More importantly, Premier Jim Prentice faces the lowest per-capita real resource revenue of any Alberta premier since Peter Lougheed. As you can see from the graph below, Lougheed’s fortunes were improving rapidly. 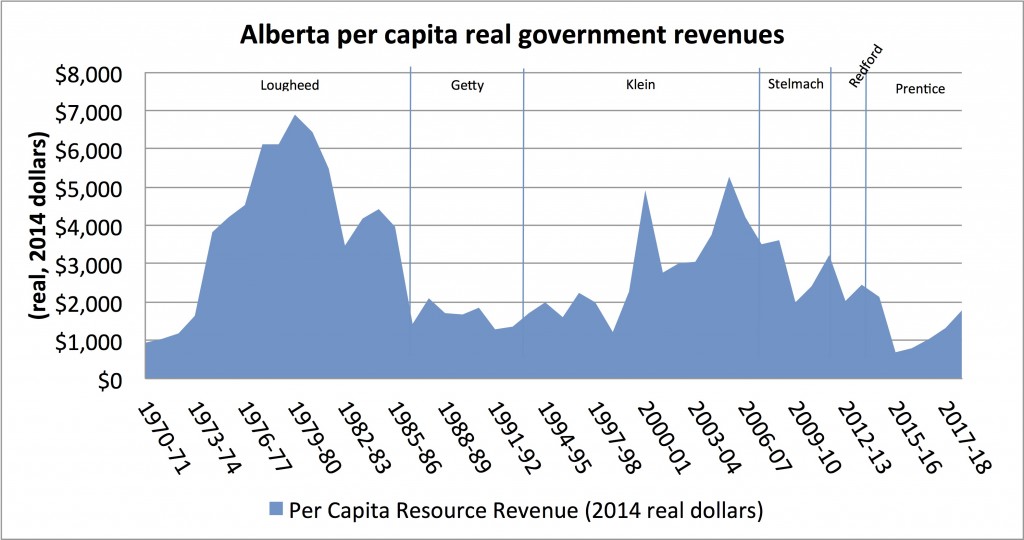 Prentice’s outlook depends crucially on a recovery in the price of oil within two years. As you can see from the graph above, after a period of low prices, the government’s mid-term projections rely on significant revenue growth—of 32 per cent cumulative average growth, to be precise—between the 2015-16 forecast value and 2019-20. Underlying these projections are two key assumptions: that oil prices will recover more quickly than the market currently predicts and that oil sands production will continue roughly as currently forecast by the Alberta Energy Regulator before the crash. The two are related—if oil prices begin to recover, the long-run impact on oil sands production will be smaller than if the oil shock persists for longer—and so let’s look at the price forecast. Below, you can see Alberta’s budget forecast for West Texas Intermediate (WTI) prices in Canadian dollars compared to the combined futures market prices for the same combination. Alberta’s forecast sees oil prices increasing much more rapidly than the combined futures market prices for oil and for the Canadian dollar would suggest.  In fact, the long-run view on the price of WTI in Canadian dollars in the Alberta budget is more bullish than the futures market was before the oil price crash—optimistic, indeed.  If oil prices follow the forward curve—or worse, the spot price plus inflation—the period of pain could be much longer in Alberta. 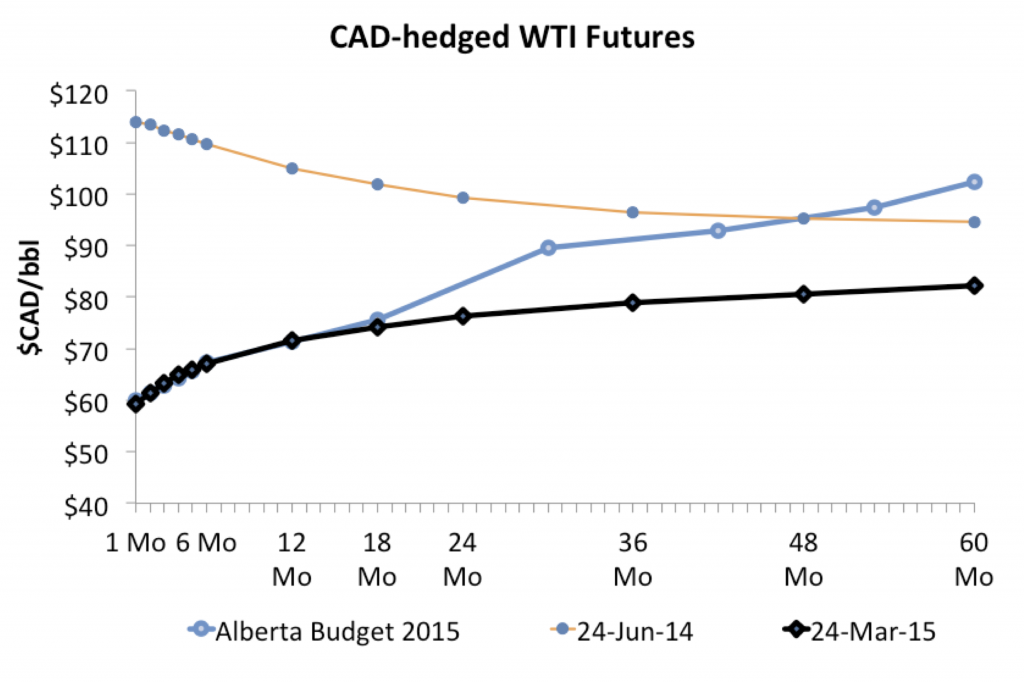 One way in which the impact of low oil prices is felt will be on the royalty share that Alberta takes from bitumen production. If we look at the combined royalty and production forecast in the Alberta budget, we can construct the forecast below which shows royalties collected per barrel produced for bitumen (left axis) and WTI prices in Canadian dollars on the right axis.  The prediction is for the bitumen royalties collected over the next fiscal year to average less than $2 per barrel—hardly a level which will easily convince Albertans that we’re getting fair value for the resource.  The last time bitumen royalties were this low, the price of West Texas Intermediate crude was in the $30 range in 2004—well below the $55 per barrel price forecast for next year.  If oil prices don’t recover as forecast, a long period of very low bitumen royalties per barrel could be in store. 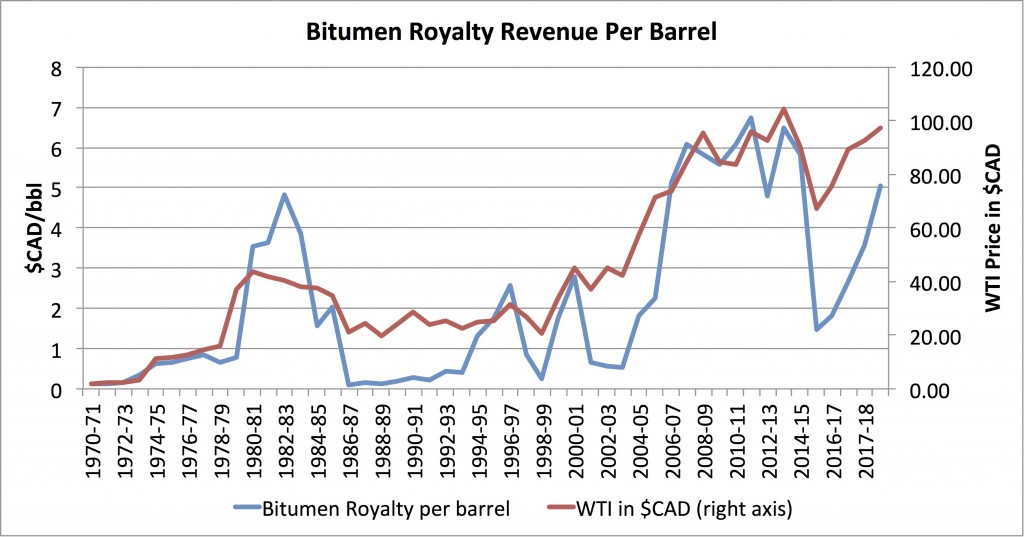 Overall, these five  charts give you a sense of the depth of the crash in resource revenues in Alberta, the challenge facing Premier Prentice, and the degree to which further cuts will have to be in store if the forecast increases in oil revenues don’t materialize.