How much will the Asian Infrastructure Investment Bank cost Canada? 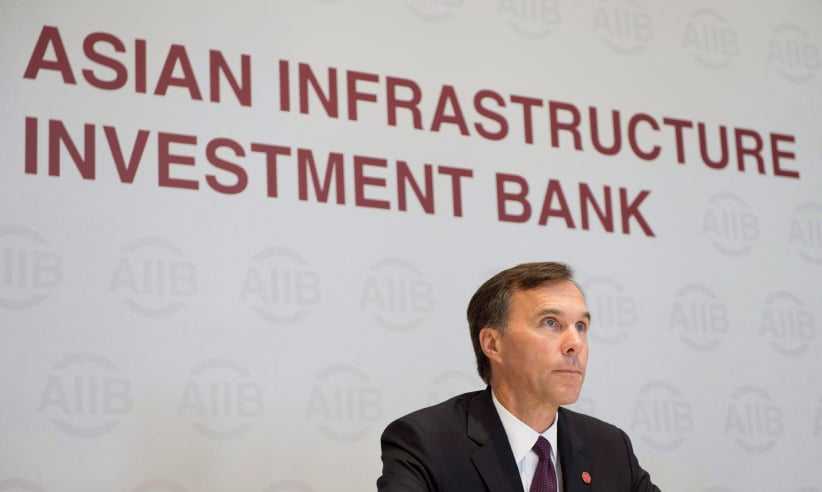 While Prime Minister Justin Trudeau was in China last week, he announced that Canada will apply to join the Asian Infrastructure Investment Bank (AIIB). In a statement, Minister of Finance Bill Morneau pointed to the government’s goal of “promoting strong, inclusive economic growth in Canada and around the world” as the reason. Opponents, including former finance minister Joe Oliver, questioned whether the benefits are worth the costs.

But what is the AIIB? How does it work? And what will the costs and benefits be for Canada? Most people don’t know, and few news stories explain. Instead, the focus is usually on the AIIB as a China-based organization that the U.S. does not want to join. For now, let’s put such geopolitical considerations aside and see what the AIIB really is and how it works. It will provide real benefits to countries in the region, and come at a small cost to Canadians (which I very roughly peg at $0.25 per year per person if all goes well). Viewed as a development initiative, the AIIB can make a lot of sense.

What is the AIIB?

There are many international investment and development “banks”. But, it’s best not to think of them as typical banks—despite their names. Rather, they’re giant loan guarantees for infrastructure projects.

If Kazakhstan wants to borrow money to build a road, for example, it must use its fairly poor BBB- credit rating. That’s not cheap. Instead, the AIIB can borrow money and provide the funds to Kazakhstan at a much lower rate. The AIIB can borrow cheaply because its member countries (China, India, Germany, France, the UK, and, soon, Canada) provide some capital as a backstop. This ensures the AIIB will receive the coveted AAA rating, and a correspondingly low borrowing rate.

It’s too soon to illustrate this with actual data from the AIIB, so let’s turn to the world’s largest development bank—the World Bank. Here’s what their finances looked like last year. 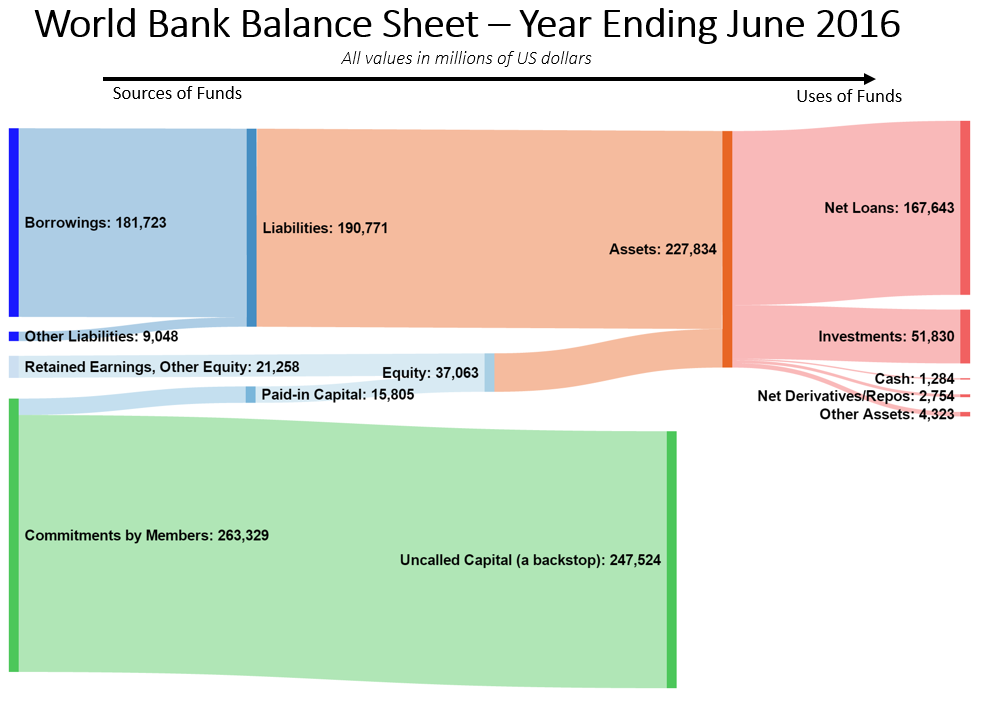 In green, we see the commitments by member countries. But most of that isn’t paid to the World Bank. It’s just a promise by countries to provide it when and if necessary. In the entire history of the Bank, this has never happened. Instead, the Bank borrows on the open market (in blue) and lends out that money to countries all around the world for various projects.

The AIIB will operate in the same way. Borrowing cheaply on the international market, and funneling those borrowed funds to recipient countries to build needed infrastructure projects. All while using commitments (mostly unpaid) by member countries as a guarantee.

Why Is It Necessary?

Infrastructure demands in Asia are massive. In recent estimates, between 2010 and 2020 the region will require nearly $800 billion per year to meet the growing demand of a rapidly developing region. Half of this is for electricity, and over a quarter for roads. Currently, other entities such as the World Bank are providing less financing than the region would like. Hence, a new bank.

To be sure, there is already a regional infrastructure bank—the Asian Development Bank. (Canada is a member of the ADB, with about $400 million in paid-in capital. Our membership in AIIB would be in addition to this.) Overall, the ADB has about $60 billion in loans outstanding, and made just over $16 billion new ones in 2015. Given the scale of the infrastructure gap in Asia, this isn’t sufficient. Though the AIIB won’t be either, it’s helpful.

What Will It Cost Canada?

How much will Canada contribute to the new AIIB? And what does that cost?

First, we will not pay operating costs of the AIIB. Nor will any other member. Those costs will be covered by margins on the loans that the AIIB makes. That is, for that road project in Kazakhstan, the AIIB will charge a little bit more than its borrowing costs and use the spread to pay its operating costs. (There may even be some left over some years. The World Bank, for example, made more last year than its costs and contributed nearly $500 million to international development assistance from its residual income.)

How much will Canada contribute as capital to the bank? The details are yet to be determined, but it’s pretty easy to come up with a ballpark guess. Countries contribute in proportion to their economic size. Here’s a set of countries that provide a relevant comparison for Canada.

Germany will contribute $4.5 billion U.S. dollars and the UK $3 billion, for example. Given the size of Canada’s economy, it’s safe to assume our contribution will be somewhere around $2.2 billion (or $2.9 billion Canadian dollars).

But not all of this is paid to the AIIB. As I illustrate below, only 20 per cent of it is paid. 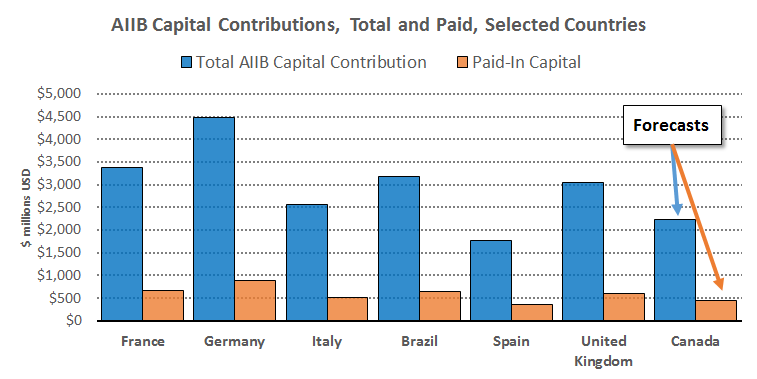 For Canada, this means we should expect $500-$600 million (CDN) in paid-in capital contributions to the AIIB when we join. This will be spread over five years as installments of $100-125 million per year.

Importantly, this isn’t a cost. Just as deposits to your own bank account aren’t a cost. The money isn’t lost, and we can get it back if we choose to withdraw later (sort of, more on this below). Instead, the true economic cost is what we have to pay in foregone earnings or in interest costs on that capital. Canada’s federal government isn’t exactly swimming in dollars (see the large persistent deficit), so the capital we contribute is effectively borrowed money. As Canada’s government can borrow long-term at just over 1.6 per cent, our capital contribution will cost us about $8-10 million per year or about 25 cents per Canadian per year. That’s modest. (Yes, these are historically low rates. But even at a 5 per cent borrowing rate, the cost of our contributions are $25-30 million per year. That’s still modest.)

Of course, there are risks. The capital we contribute is at risk if borrowers cannot repay the loans. That’s nearly $3 billion on the line. But those risks are small. No member country wants to lose money. The World Bank, for example, has never once tapped the uncalled capital contributions of its members. If the AIIB chooses its projects wisely, and ensures borrowing governments are able to carry the interest costs, then there is no problem. So far, most projects are joint funded with the World Bank, the Asian Development Bank, or the European Bank for Reconstruction and Development. Such partnerships will likely continue.

What are the Benefits?

Some point to direct economic benefits for Canadian companies hoping to bid on infrastructure projects. This is a bit of a stretch. There’s nothing in the AIIB rules that restrict procurement to within member countries. Any company, anywhere can bid whether they’re from a member country or not.

Instead, it’s best to view our membership in AIIB as a development initiative, not as a business opportunity. That road in Kazakhstan I referenced earlier, it’s real. The AIIB is also funding a dam in Pakistan, a transmission line in India, and urban infrastructure for slums in Indonesia. We won’t provide direct contributions for these projects, but help strengthen the AIIB’s implicit loan guarantee. For perspective, Canada provided roughly $5.8 billion in direct international development assistance last year. That puts the $8-10 million in costs to participate in the AIIB into perspective.

Of course there are indirect benefits. As the Asia Pacific region develops, Canada will have increased trade and investment opportunities. Our membership won’t be a make-or-break for any particular project, but will help lower borrowing costs for many, and in some small way boost productivity and economic growth in the region.

Can We Withdrawal Our Money?

Members of the AIIB can leave the bank with six months’ notice. (For details, see Chapter VII of the AIIB Articles of Agreement.) But we can’t just take our capital contributions and run at the slightest sign of trouble. We have to wait until the various obligations of the AIIB (such as waiting until Kazakhstan repays its loan for the road) are unwound. But, from the moment we exit the bank we will incur no new obligations. While it takes a while to get capital contributions back, if we want to leave we can.

It’ll be a few months before we hear more details. The federal government outlined the process here. In short, new members have until the end of September to express their interest in joining. The AIIB Board will decide on memberships, and on specific capital contributions, by early 2017.

Between now and then there is sure to be much debate on the merits of joining. But given the low cost, low risk, and opportunity to help lower infrastructure financing costs for important emerging economies, it’s hard to argue against AIIB membership for Canada.

Trevor Tombe is an Assistant Professor of Economics at the University of Calgary, and Research Fellow at the School of Public Policy.