How to determine whether the Alberta government's $645-million energy efficiency program, paid for with carbon tax revenue, is money well spent 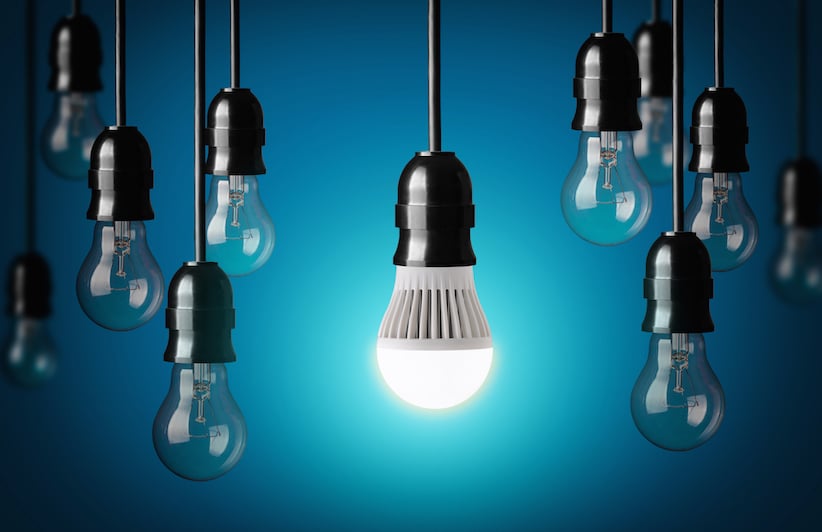 Following a report by Alberta’s Energy Efficiency Advisory Panel, the government announced a large program last week aimed at improving the energy efficiency of homes, businesses and non-profits. It will fund free installation of energy efficiency products throughout the province, and provide rebates on efficient appliances, lighting, and so on. With a budget of $645 million over the next five years, funded by carbon tax revenue, it’s no small endeavour and is worth a careful look.

First, let’s take a step back and ask: What is the purpose of energy efficiency programs?

Simply put, they can potentially solve two market failures: (1) environmental externalities; and (2) behavioural biases. The success of the program should be evaluated based on how effectively it solves them and at what cost.

To the extent that greenhouse gas emissions from energy use are not paid by private individuals, we tend to over-consume. While a carbon tax can address this externality, it only partially does so in Alberta. Natural gas prices will increase by $1/GJ this year and $1.5/GJ next, and by 2022 natural gas prices will incorporate $2.50 in carbon taxes—near reasonable social cost of carbon estimates. But in electricity, it’s a different story.

Alberta opted for a system that will not increase the price of electricity to consumers but only the relative mix of lower vs. higher carbon intensity generation. As a consequence, our end-use electricity consumption does not account for the external cost of emissions. Energy efficiency programs that subsidize more efficient electricity use can, in principle (if properly aligned with carbon costs), achieve the same effect as the carbon tax would.

The second role for energy efficiency programs is to correct what might be called “internalities,” or behavioural market failures. These fall in the category of behavioural biases (inattention, imperfect information, hyperbolic discounting, etc.) and energy efficiency programs that might help individuals overcome such biases—nudging them toward objectively better choices. Though this may be thought of as a paternalistic justification, there are overall improvements in social welfare too.

The economics of LED lighting

To illustrate potential gains from efficiency, consider a stark example: LED lighting. Like Moore’s Law for computers, LEDs have their own version known as Haitz’s Law, which predicts the cost per lumen of LEDs will fall by a factor of 10 every decade. And Haitz has been largely correct, if not conservative—an LED bulb costs roughly $3 today, down from $30 only five years ago.

Not only are they cheap, but they use much less energy to produce the same amount of light. Replacing a 60-watt incandescent bulb with a comparably bright LED reduces energy use by 85 per cent, or roughly 50 watts. Assuming 1,000 hours per year of use, this results in 50 kilowatt-hours (kWh) of energy savings. This has two direct benefits.

First, the private benefits. At an all-in consumer cost for electricity of eight cents per kWh (assuming five cents for energy and three cents for delivery), saving 50 kWh means saving $4 per year. After one year the bulb pays for itself! Over a 10-year lifespan, that’s worth $25 (using a 10 per cent discount rate). At a cost of $3 per bulb, it’s a no-brainer to switch.

Second, the social benefits. Reducing energy means reducing emissions. If powered by a typical natural gas power plant, swapping one incandescent to LED lowers emissions by about 25 kg of CO2 per year. At a social cost of $50 per tonne, that’s about $1.25 of annual social benefits or $11 present value of lifetime savings (using a two per cent social discount rate).

Combined, these benefits add up to real savings for households. Typically, there are 40 bulbs to swap in a household, so the combined total annual benefit of avoided emissions and energy costs are roughly $210 (illustrated below). Over 10 years, the private and social benefit of LED subsidies are substantial. 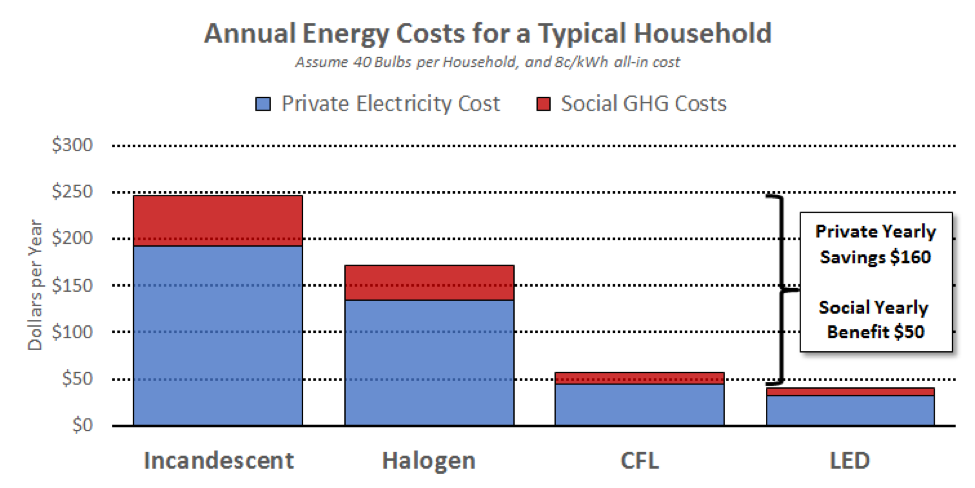 Small decisions can add up. In some sense, choosing more efficient bulbs means the productivity of producing light goes up, and this productivity increase has real value. To see how big, let’s scale up the LED example.

Total residential and commercial electricity demand is 10 and 15 TWh per year in Alberta, of which roughly 10 and 20 per cent, respectively, is demand for lighting. Depending on what share of this lighting demand can switch to LEDs (roughly two-thirds of households don’t have any), the overall electricity savings can be massive. 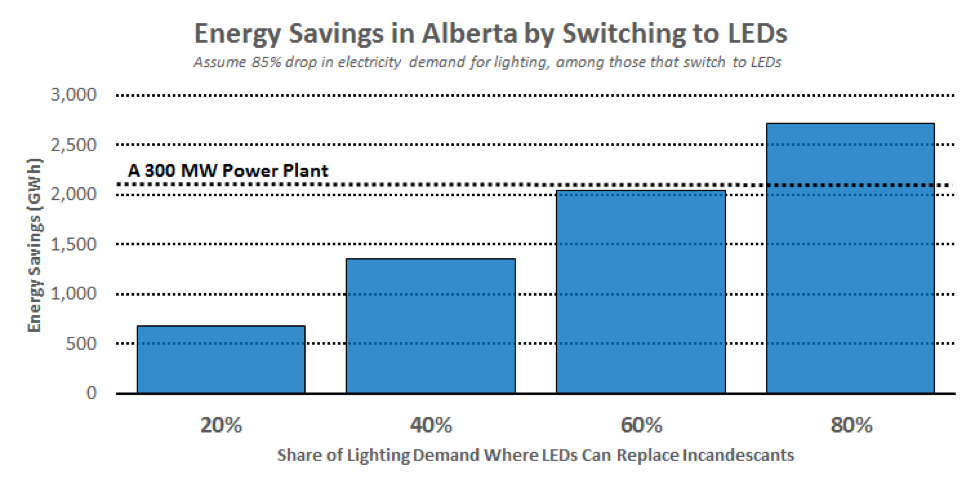 For perspective, if 60 per cent of lighting demand switches, the savings approach a decent sized 300MW power plant—not too far off the average coal plant Alberta is phasing out by 2030. Full LED penetration may mean one less coal plant to replace and in fact other jurisdictions are looking to energy efficiency to replace capacity from power plants that are phased out. In this way energy efficiency can be thought of as a resource itself, compared with other ways of generating electricity.

In dollars, this can be substantial. First, the plant itself. The most recently commissioned natural gas plant in Alberta is the Shepard Energy Centre, which was 800-MW capacity for $1.4 billion. Scaling this back suggests the capital cost for a smaller 300-MW facility might be roughly $500-600 million. (Compare this to the $645 million energy efficiency program cost.)

Second, the wires. When a household reduces electricity use, they avoid the variable costs. But transmission and distribution charges have both variable and fixed components. In time, if we all reduce energy use, we’ll need less infrastructure and these fixed costs will fall, too. For perspective, the AESO is planning to spend $2.5 billion on projects in progress with an additional $400 on planned developments in the transmission system. Savings here matter, and research suggests energy efficiency may be a cost-effective alternative to new electricity infrastructure. (See this or this.)

Lower energy costs, lower transmission and distribution costs, and lower environmental damages all add up. But if gains are so large, why don’t individuals or industry make the necessary choices themselves? First, governments sometimes prevents industry from doing so (see this). Second, behavioural biases affect us all and often get in the way of smart decisions.

Do people invest too little in energy efficiency?

Yes. Only one-third of households have LEDs, to say nothing of the countless other economical efficiency investments that could be made. Indeed, one of the authors has zero LEDs at home, despite knowing they pay for themselves.

Behavioural economics revolves around this very question. We may lack knowledge of the costs and benefits. We have may cognitive costs that make change difficult—that is, perhaps our status-quo bias is strong. We may satisfice too frequently, and consider incandescents “good enough.” We may be loss averse, and worry about making a mistake. We may discount the future too heavily, and neglect long-term payoffs (even if large). The list goes on, and on, and on.

Programs that go beyond direct grants may serve to nudge people by giving them tools to change behaviour in a way that will actually benefit them. To the extent that they can, for example by the use of government funds for innovative financing programs, the costs can be small. Delaware’s energy efficiency program, for example, receives only modest state support, but attempts to earn money by covering up-front costs for households in exchange for a share of estimated future energy savings.

Devil in the details

There are many critical details that must not be overlooked. We’ve focused on LEDs, but this isn’t representative of the whole $645-million program. Even if it were, our estimates apply only to the extent that we’re actually swapping LEDs for incandescents. Direct install programs (which are part of the first steps in the Alberta plan) minimize this risk. Though direct install comes at a cost, there are many other changes that could be done to a home on a single visit, such as low-cost weatherstripping, which lowers installation costs per unit of energy saved.

Beyond LEDs and other low-cost measures, direct investments may be less beneficial than moving to other approaches such as financing, and each initiative must be approached with caution and with clear metrics in mind. For example, a recent (and very well done) study by economists Michael Greenstone, Meredith Fowlie, and Catherine Wolfram, finds weatherization assistance programs in the United States (which provides furnace replacements, insulation upgrades, or weather stripping, for example) had costs that were roughly double the benefits. Energy savings were far lower than anticipated, because individuals may respond to greater energy efficiency with greater energy use. This is called the “rebound effect,” and can be large. It is important to couple grants with educational and outreach programs at the same time to minimize the effect.

There are also distributional consequences to consider. Rebates and other programs transfer value to recipients. As home ownership and house size are tightly related to income, higher-income households receive more of the benefit, making the program regressive. 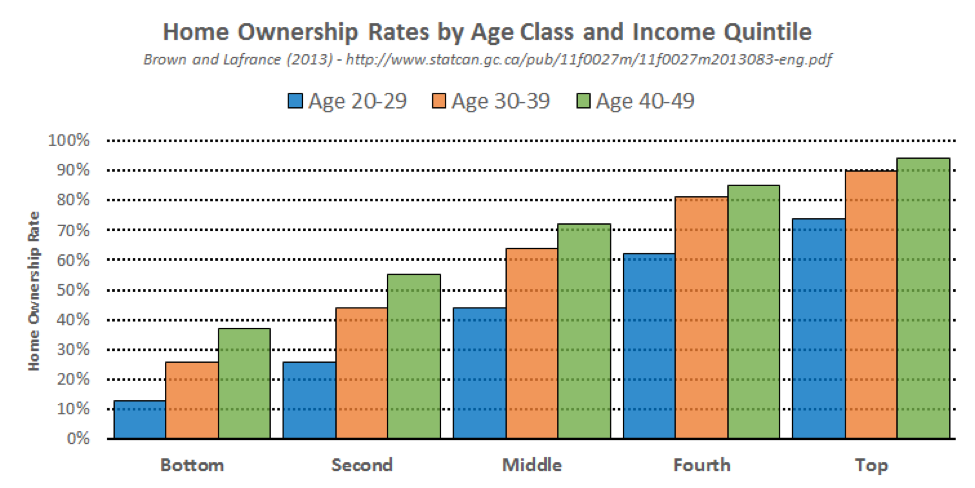 On the other hand, higher-income households may disproportionately be early adopters of energy-efficiency enhancements, and thus not receiving the benefit of now-subsidized upgrades. But research by University of Ottawa economists Nicholas Rivers and Leslie Shiell shows energy-efficiency programs tend to be regressive.

To be sure, this is not itself a reason not to have an energy-efficiency program. Low-income households have already received generous credits to offset the new carbon tax. That is strongly progressive. In addition, low-income households may face more barriers to participation in terms of time, resources and upfront capital, and also tend to have lower-quality housing. Direct-install programs may address many of these barriers, financing is another important tool. Low-income households also spend a higher percentage of income on energy.  In any case, the devil is in the details, and a well-designed energy-efficiency program must carefully consider these (and other) issues.

Overall, Alberta’s new energy-efficiency program is a potentially important new initiative. But we must be clear about its objectives. The primary goal is solving market failures that prevent energy efficiency uptake today: one environmental and one behavioural. While there may be scope for low-cost nudges that improve aggregate welfare, we should approach larger scale initiatives with care. To ensure the $645 million are spent well, government should use clear and measurable metrics (dollars and energy saved, per dollar invested) and consider approaches beyond direct install and grants such as financing. It’s feasible the program could, from society’s point of view, pay for itself and be well worth the effort. But only if we’re clear on the goal we’re trying to achieve, and keep a close eye on the program’s overall efficiency.

Sara Hastings-Simon is the director of the Pembina Institute’s clean economy program in Alberta, Blake Shaffer is a C.D. Howe Institute Fellow-in-Residence, and Trevor Tombe is an assistant professor with the University of Calgary’s department of economics.