Opinion: Those concerned about poverty, inequality or middle class living standards should oppose Canada’s milk tax and take advantage of the opportunity presented by Trump. 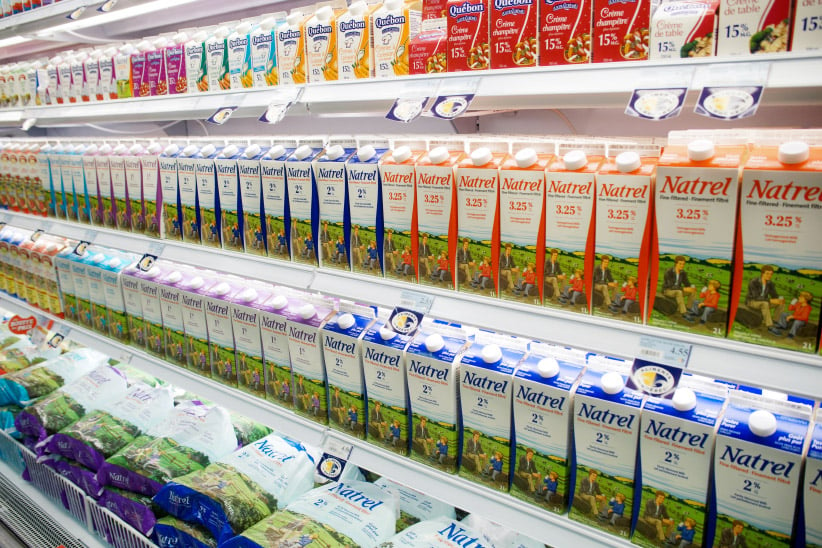 Display of milk in a Quebec supermarket, April 17, 2013. (Mario Beauregard/CP)

In a recent Wisconsin speech, President Trump targeted Canada’s dairy sector and promised “fair trade” in a renegotiated NAFTA. If he follows through, Canadians should be thankful.

While we’re not to blame for financial difficulties of some U.S. farmers, as the President suggested, our agricultural sector is highly restrictive—especially in “supply managed” products like milk, poultry, and eggs. We limit production by requiring farmers hold scarce and costly licenses (called quotas), and levy tariffs approaching 300 per cent on imports from abroad.

The result is less competition, lower productivity, and higher prices. This not only harms consumers, especially low income ones, but transfers vast sums to typically wealthy farmers and needlessly endangers our international trading relationships. It shrinks the available market for productive producers on both sides of the border, and the President is right to call us out.

According to recent estimates from the OECD, the artificially high agricultural prices in Canada transfer $3.5 billion from consumers to producers annually — nearly $3 billion from milk alone. Spread over the 8 billion litres of annual production, it’s effectively a hidden milk tax of 37 cents per litre.

For producers, this is a big deal. At the end of 2015, there were just under 11,500 dairy farms in Canada. The $3 billion that supply management allows them to extract each year is equivalent to $260,000 per farm. Much of this is capitalized into the value of the quotas they are required to hold. One quota roughly corresponds to a single cow’s annual production, and in BC and Alberta they’re each currently worth roughly $40,000; in Ontario and Quebec, they go for $24,000. With nearly one million dairy cows in Canada, quotas are collectively worth tens of billions of dollars, an important cause of our country’s higher production costs.

This kind of system is highly regressive. The average dairy farmer had a net worth of more than $3.7 million in 2015, according to data from Statistics Canada, and poultry and eggs farmers were typically worth nearly $6 million. Meanwhile, low-income consumers face a heavy burden.

In recently published research, University of Manitoba economists Ryan Cardwell, Chad Lawley, and Di Xiang show that supply management costs the typical household the equivalent of $450 per year—and nearly $600 per year among households with children. For the poorest 20 per cent among us, that’s roughly 2.4 per cent of income; for the richest 20 per cent, it’s barely 0.5 per cent. Let that sink in. Those concerned about poverty, inequality, or living standards of the middle class (every politician’s favourite group) should oppose Canada’s milk tax.

To be sure, the system keeps some farms afloat. Dairy productivity in Canada is systematically lower than the United States, and open borders would be challenging. Here, the typical cow produces about 8,500 kg of milk per year. Compare this to a Wisconsin cow that produces well over 10,000, according to the USDA. This state produces more milk than all of Canada, is a key electoral battleground for President and the home of House Speaker Paul Ryan, so it’s little wonder that’s where the President made his comments.

Contrary to claims by some, growth hormone use among U.S. producers is not the only reason for their higher productivity. Washington, for example, is rbST-free yet maintains milk production of more than 10,800 kg per year per cow.

The reality is that Canada’s productivity is artificially and unnecessarily low. If we opened our borders and liberalized the sector, productive farmers would expand, unproductive ones would shrink, and others would adapt, innovate, and increase their productivity in the face of stiffer competition. Supply management also misallocates land, labour, and other farm resources away from non-supply managed crops and farmers where Canada has a clearer advantage.

What’s stopping reform? Politics, of course. It’s a classic dilemma where visible benefits are concentrated, while hidden costs are borne by millions. According to the latest Census of Agriculture, more than 80 per cent of Canada’s dairy farms are located in Ontario and Quebec and half are found in fewer than three dozen Census Divisions. The electoral calculus is clear.

Of course, there’s no need to reform overnight and hang farmers out to dry. A reasonable transition period and direct supports to farmers could surely be provided. For example, we could compensate farmers through a direct levy on milk consumption, but one that we would gradually phase-out. An explicit and temporary milk tax like this would be cheaper for consumers, and better for Canada’s economy, than the system we have now.

As the NAFTA talks unfold, let’s get serious. There are few defensible reasons for supply management to exist. So what might seem like a concession, isn’t. Putting dairy on the negotiating table is a big opportunity for us to finally tackle this issue. We should take it.

Trevor Tombe is an Assistant Professor of Economics at the University of Calgary, and a Research Fellow at the School of Public Policy.