Ontario budget 2018: In an election year, Wynne bets on deficits

Governments often cut spending and balance the books in time for an election. The Liberals turn that strategy on its head. 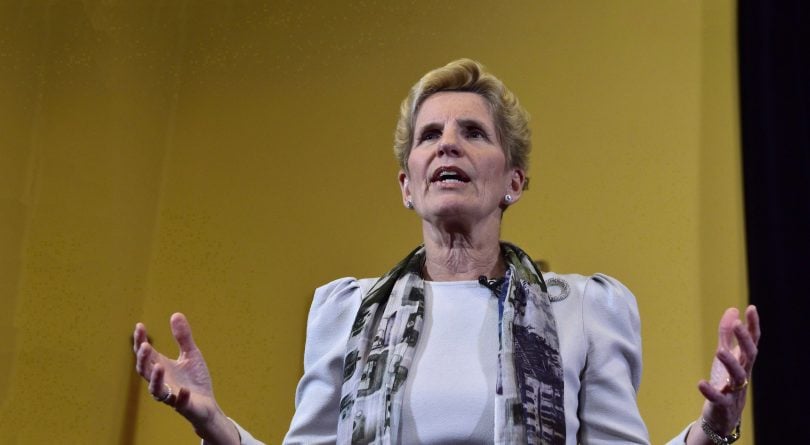 For one fleeting moment, Ontario has a budget surplus. Soon, it will be gone, replaced by six years of red ink. The Ontario Liberal Party, which tabled a budget Wednesday, will not crawl out from deficits until 2024-25—provided the party can stay in power until then.

And that, primarily, is what the budget is about. It is filled with large spending measures, many of them previously announced, designed to entice voters to elect an unpopular government for another term in June. The question is just how much risk the Liberals are taking with the economy in order to win.

The Liberals produced a modest $600-million surplus in 2017-18, but it will be quickly replaced by a total of $31.9-billion in deficit spending over the following six years. All of that spending will have a limited effect on the province’s net debt-to-GDP ratio, however, which stands at 37.1 per cent. That figure will rise to 38.9 per cent before declining to 35.5 per cent over the forecast period—still below the peak of a few years ago.

The fiscal outlook is a stark contrast to last year, when premier Kathleen Wynne trumpeted the first balanced budget in nine years. Not only that, but the Liberals projected a balance over the next two years as well. “A balanced budget is never an end in itself,” Finance Minister Charles Sousa said in his budget speech last year. Nor, would it seem, is it something that sticks around for very long.

The deficits are the result of large spending initiatives in health care, child care and pharmacare. While the initiatives are laudable, the timing is especially curious. Typically, now would be the time in the cycle to pull back on spending and start paying down debt.

The Ontario economy is coming off a period of strong growth, and unemployment stands at 5.5 per cent, below the federal average and the lowest level in 17 years. Hacking away at $348.8-billion in total debt would give the province more room to deal with the next recession—especially in an era of economic uncertainty and rising interest rates. The period for getting back to balance—six years—is too long to put much confidence in. “There’s a very high probability in the next six years that there’s going to be a global downturn, or at least a North American downturn,” says Michael Dolega, a senior economist with TD. “Everything would have to go right for that outcome to materialize.”

The Liberals can argue that beyond the social good provided by its spending initiatives, some of its policies do carry an economic benefit. Take the $2.2-billion over three years on child care, including to provide free licensed daycare spots for kids older than 2 1/2 until kindergarten. Economist Pierre Fortin has extensively studied Quebec’s subsidized child care program, and found that between 1998 and 2016, the participation rate for women aged 20-44 increased from 76 per cent to 85 per cent, outpacing the rest of Canada. What’s more, Fortin found the higher incomes attributable to an increased number of women in the workforce generated more spending and GDP growth.

The participation rate among women in Ontario could definitely move higher. For those aged 25 to 44, the participation rate is 81.2 per cent compared to 87.5 per cent in Quebec. The Liberals’ child care program is not identical to Quebec’s, of course, and many details have to be ironed out. Like everything, execution is critical.

Any economic benefit could be a ways off, too, while the best days of growth are behind us for now. Between 2015 and 2017, the Ontario economy grew 2.7 per cent annually on average, according to government figures. But over the next few years, growth will slow to less than 2 per cent, in part due to the cooling housing market. Residential investment in Ontario surged 6 per cent annually between 2015-2017, but growth is expected to drop to less than one per cent over the next four years.

The government projects that business investment will help pick up the slack. That sector has been weak since the recession, and between 2015 and 2017, business investment actually declined in Ontario. But the government projects it will surge 4.2 per cent annually on average from now until 2021, “led by strong U.S. demand” That may prove to be an overly optimistic assumption. “It just doesn’t add up,” Dolega says. NAFTA negotiations are weighing heavily on trade and investment, as is the protectionist bent of U.S. President Donald Trump’s administration. Plus, the U.S. passed massive corporate tax cuts that put Canadian companies at a disadvantage, potentially dampening investment. Even the somewhat weak loonie hasn’t spurred much growth in Canada’s export sector.

Sousa, however, is confident investment will pick up, owing to the government’s spending on health care, education and other social programs. “It’s an attraction to the foreign direct investment that comes to the province,” he told reporters. Sousa also rejected the premise that the Liberals’ forecasts are too rosy. “We are building in a tremendous amount of prudence in our projections,” he said.

But the Liberals are overestimating the strength of the housing market too, according to Dolega. The government projects existing home sales will increase 2 per cent in 2018, while TD anticipates a decline of 21.5 per cent. Likewise, the government anticipates no change in home prices compared to a 5.3 per cent drop. Assuming TD is correct (and the bank could be wrong, keep in mind) the government could be overestimating revenue from the housing market by nearly $900-million.

Credit ratings agencies are likely to take a dim view of the budget. Moody’s already warned in a report this month that the Liberals’ decision to return to deficits is “credit negative.” Fitch was similarly ominous.

Sousa seemed unconcerned about ratings agencies. “People continue to want to invest in Ontario,” he said. It is important to put Ontario’s fiscal situation into perspective. The province’s debt-to-GDP ratio is better than that of Quebec, New Brunswick and Newfoundland. And its credit ratings from the various agencies are still strong. It’s ironic, however, that S&P Global Ratings upgraded Quebec, typically the poster child for fiscal irresponsibility in Canada, to a better rating than Ontario last year.

Quebec turned in its fourth straight balanced budget this week. “It’s a necessity,” the province’s finance minister, Carlos Leitao, told reporters. “If you can’t balance the budget at the top of the business cycle, when can you?”

It’s a question the Liberals may want to ask themselves.