Through restraint and strategic tax hikes, Saskatchewan shows how to get off the royalty rollercoaster 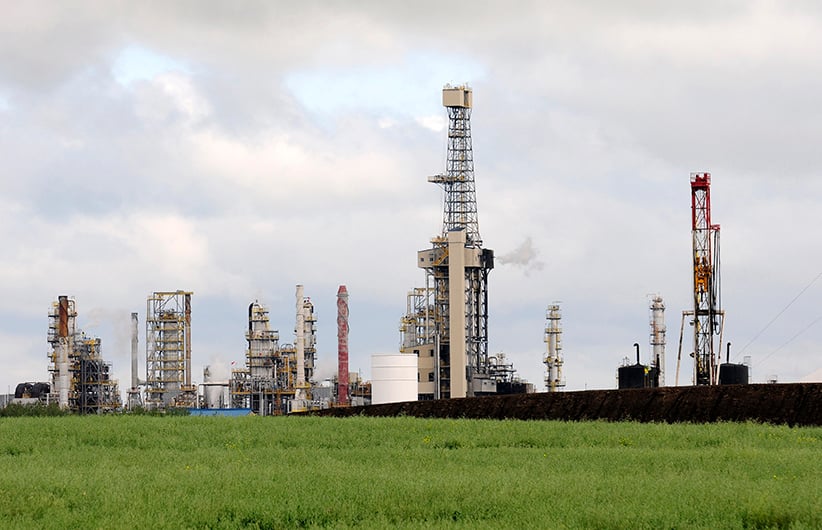 An drilling rig, right, at work near the Husky Energy upgrader in Lloydminster, Sask. (Larry MacDougal/CP)

Alberta and Saskatchewan have budget problems. And they’ve had them for decades.

Easy money from resource revenues provided roughly one-quarter of all provincial revenue only a few short years ago. The collapse in oil prices, which aren’t expected to rise any time soon, revealed each province’s shaky budget foundations for all to see. 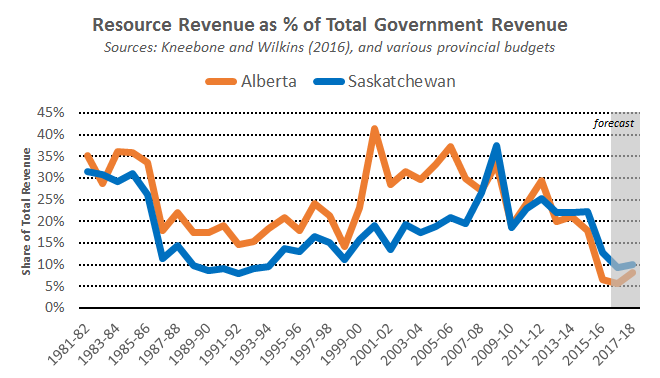 Though they face similar challenges, their responses are anything but.

In Alberta, budget debates are highly polarized. Spending restraint is unacceptable slash-and-burn to some, while to others tax increases are nefarious socialist plots (we exaggerate; but only a little). Neither position is particularly sensible. Alberta has one of the highest levels of spending, per person, yet the lowest taxes in Canada by far. Neither side of the political spectrum seems willing to budge.

It doesn’t need to be this way.

On Wednesday, the government of Saskatchewan presented a budget offering what one might call a middle ground. That is, they will solve their budget problem with both revenue and spending measures (in fairness, Alberta’s provincial-named party—the Alberta party—is also proposing a similar middle ground approach).

On the spending side, the government is lowering public-sector employee compensation by 3.5 per cent, largely through the use of mandatory days off. This doesn’t (yet) apply to all public sector workers; but expect negotiations to be seeking cuts of that magnitude. In addition, program expenditures are falling from $13,008 per person in 2016-17 to $12,620 in 2017-18—a three per cent reduction. Adjusted for inflation, it’s effectively a 4.3 per cent real per-capita spending reduction in one year. That’s a lot.

On the revenue side, the largest change is a nearly $900-million increase to the provincial sales tax. The increase has two parts: the rate is rising (from five per cent to six) and the base is broadening to cover previously exempt goods like children’s clothing and restaurant meals. While the former may get the headlines, the latter is more substantial. 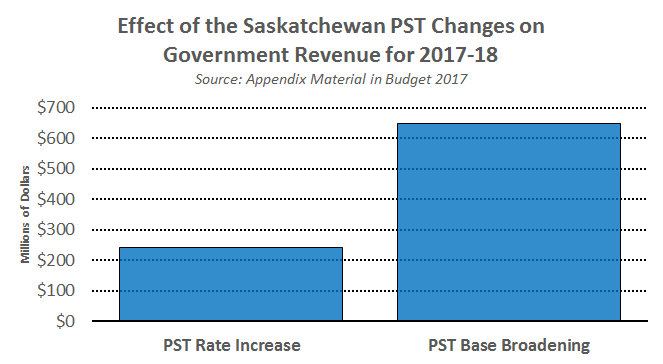 For perspective, the province would need an 8.8 percent PST to raise the same amount without broadening the base.

Partially offsetting these tax increases are lower personal and corporate income tax rates. Across the board, income tax rates will fall by half a point for all brackets. In 2019, they are set to drop by another half a point. This shift in taxation away from income, towards consumption, is what many economists recommend. But it comes with both pros and cons.

All taxes change behaviour. Sometimes this is a feature (e.g., carbon taxes) but most other times it’s a bug. Taxes on income discourage employment and taxes on capital discourage investment. These effects can have large costs as recent research from economists Bev Dahlby and Ergete Ferede demonstrates. They find Saskatchewan’s PST costs its economy $1.41 for each $1 raised, and personal income taxes cost the provincial economy $2.38—a substantially higher economic burden, for the same revenue raised by the government. Worse still, the researchers found corporate taxes in Saskatchewan are so distortionary that lowering the corporate income tax rate may actually increase government revenue. That is, the corporate tax rate may be on the wrong side of the famous Laffer Curve (note: this isn’t the case in Alberta.).

That being said, the PST is not the best Saskatchewan could have done. Their PST is a particular burden on businesses, who must pay it on their inputs. Taxing inputs in this way distorts business decisions, raises the effective tax rate on them, and lowers investment and productivity. To illustrate, recent research by University of Calgary economist Jack Mintz finds that after B.C. ditched the HST and returned to the PST, their effective tax rate on new business investment rose almost 10 points—from 17.8 per cent to 27.5 per cent. By sticking with their PST while raising its rate, Saskatchewan is missing an opportunity to improve its tax system even further by switching to an HST (or something like it).

Efficiency isn’t everything. Both the spending and the revenue decisions will affect different people in different ways. Post-secondary institutions will see their grants fall by five per cent, so may raise tuition; seniors will see the cost of long-term care facilities increase and public servants will see lower earnings. The list goes on.

But the tax changes are where the distributional effects might be starkest. Low-income households tend to spend a larger share of their income on consumption, whereas higher-income households face a higher income-tax burden. By reducing income taxes and raising consumption taxes, the Saskatchewan tax shift risks being regressive.

To help address this, Saskatchewan is boosting one of its income-tested programs known as the Low-Income Tax Credit (the LITC). It’s a transfer to qualifying families that will increase by $100 per adult and $40 per child. But is this enough to compensate for higher sales taxes? While that’s a tricky question to answer, our preliminary analysis (using this Statistics Canada tool) suggests it isn’t. 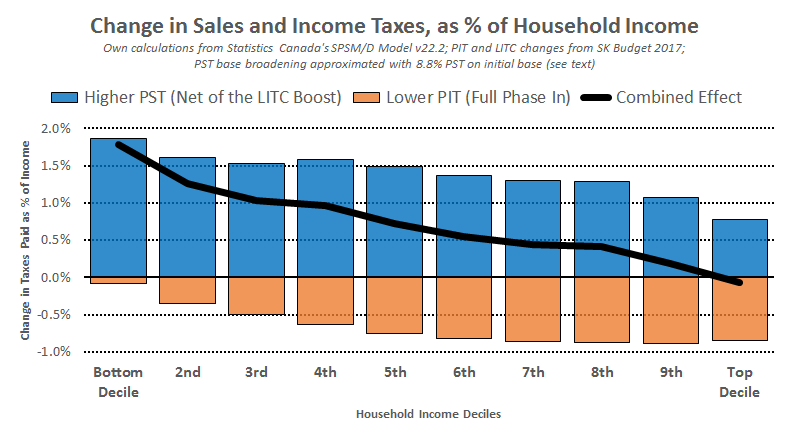 If the goal is to not disproportionately burden lower income households with a sales tax increase, the LITC increase seems to come up short. But important concerns about equity can be dealt with—and isn’t itself an argument for inaction. Rather, it’s an argument to boost the LITC even more, introduce a robust working income tax benefit, or enact countless other potential policies.

Whatever one thinks of the merits of the tax and spending changes, they’ll have a large effect.

Roughly speaking, absent any changes, and had spending evolved along with population growth and inflation, the deficit would have been $2.2 billion. With the measures announced in the budget, the deficit falls to less than $400 million—including a contingency of $300 million added on top of that for good measure. 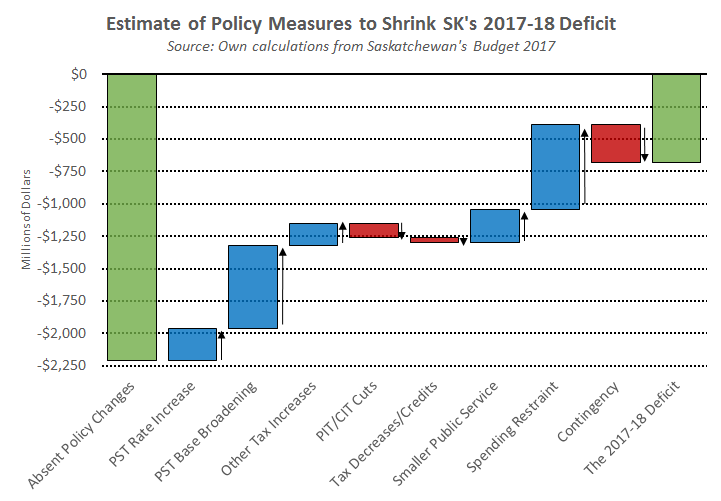 For an economy the size of Saskatchewan, this is a big move. In one year, they reduced a deficit approaching three per cent of GDP to just under 0.5 per cent (ignoring the contingency). For perspective, it’s as if the federal government closed a $40- to $50-billion budget hole in a single year.

The government also plans further spending restraint and other modest tax changes in future budgets. The aim: balance by 2019-20. 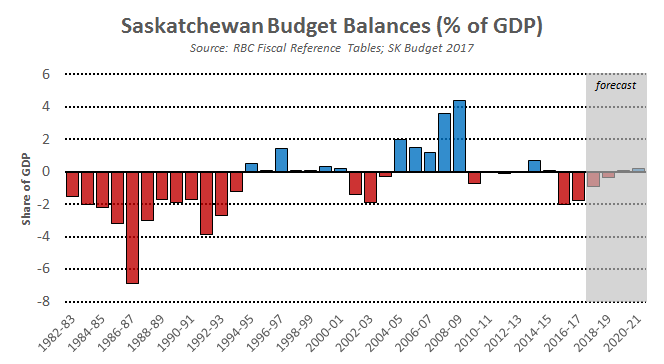 Does this get Saskatchewan off the royalty roller coaster? Not quite, but it makes a real difference. The budget may balance by 2019 with resource revenue at about 10 per cent of revenue. Contrast that with the roughly 20 per cent required to balance in 2014-15. Thus, in some sense, Saskatchewan’s budget decisions cut their dependence on resource revenues in half. If future governments save (rather than spend) any resource revenue in excess of this new lower level, Saskatchewan will be less exposed to future drops in commodity prices.

In dealing with low oil prices, Alberta and Saskatchewan provide a strong contrast. In one, debt is buying time. In the other, difficult choices are being made. One can certainly debate the pros and cons of each revenue and spending decision Saskatchewan made, especially given the disproportionate burden placed on lower income households. But if not these policies, what? If not now, when? There are only three ways to lower a deficit: increase revenues, decrease spending, or some combination of the two. Regardless of one’s political leanings, inaction or all-or-none solutions shouldn’t be the only options on the table. Compromise can be found.

Trevor Tombe is an Assistant Professor at the University of Calgary and Research Fellow at the School of Public Policy. Blake Shaffer is a C.D. Howe Institute Fellow-in-Residence.