The 2018 Ontario Budget in charts and numbers 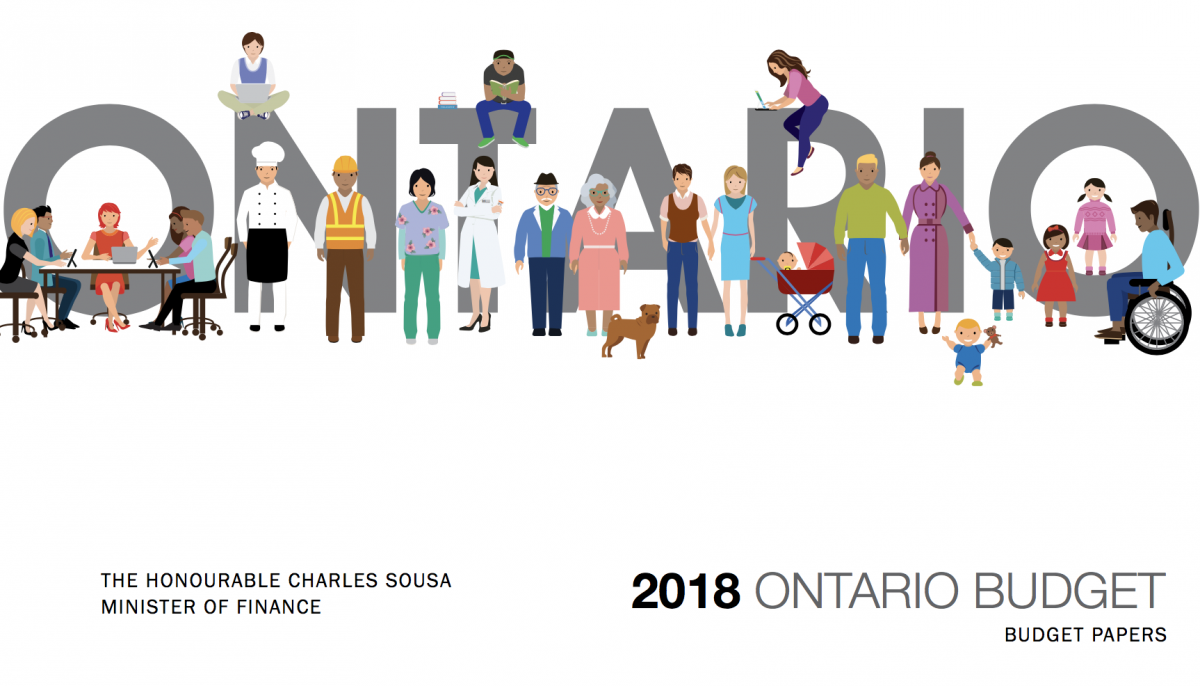 Most people who make more than $72,500 are going to pay more personal income tax. As part of the Liberals’ efforts to add fairness and transparency to income taxes, new tax brackets are coming in and the surtax (which has shortcomings as it acts as a tax on a tax) is headed to the dustbin. Here are what the new tax brackets will look like: 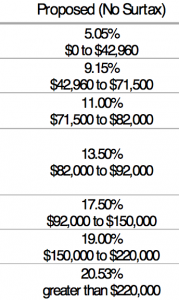 Budget documents didn’t get to that nugget (because who wants to read about their taxes in an election budget?) until the back of the 308-page book, and emphasized that 83 per cent of Ontario’s 11 million tax filers would see no tax increase. What’s more, the government revealed the changes would score a windfall of $275 million this coming year as a result. That money would come from new brackets for those who make between $71,500 and $220,000 a year. The surtax targeted high incomes but the new bracket regime actually makes no difference for those earning $220,000 or more. The budget says 1.8 million Ontarians will pay $200 more in income tax, while 680,000 lucky souls will pay on average $130 less.

Finance Minister Charles Sousa’s “Fiscal Recovery Plan” calls for some fiscal sickness before it gets better again. We won’t be singing Back in Black until 2025, based on this plan: 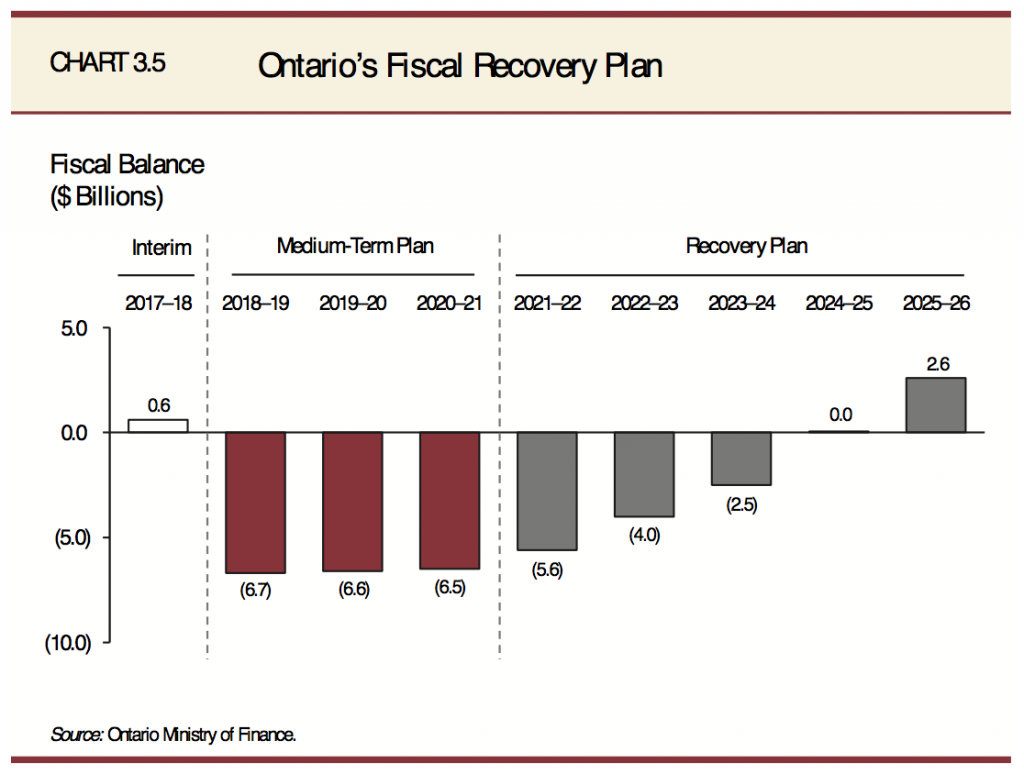 For fiscal conservatives, or Conservatives, that hurts after watching how hard it was to wrestle back deficits in the last nine years after the global financial crisis and recession (below): 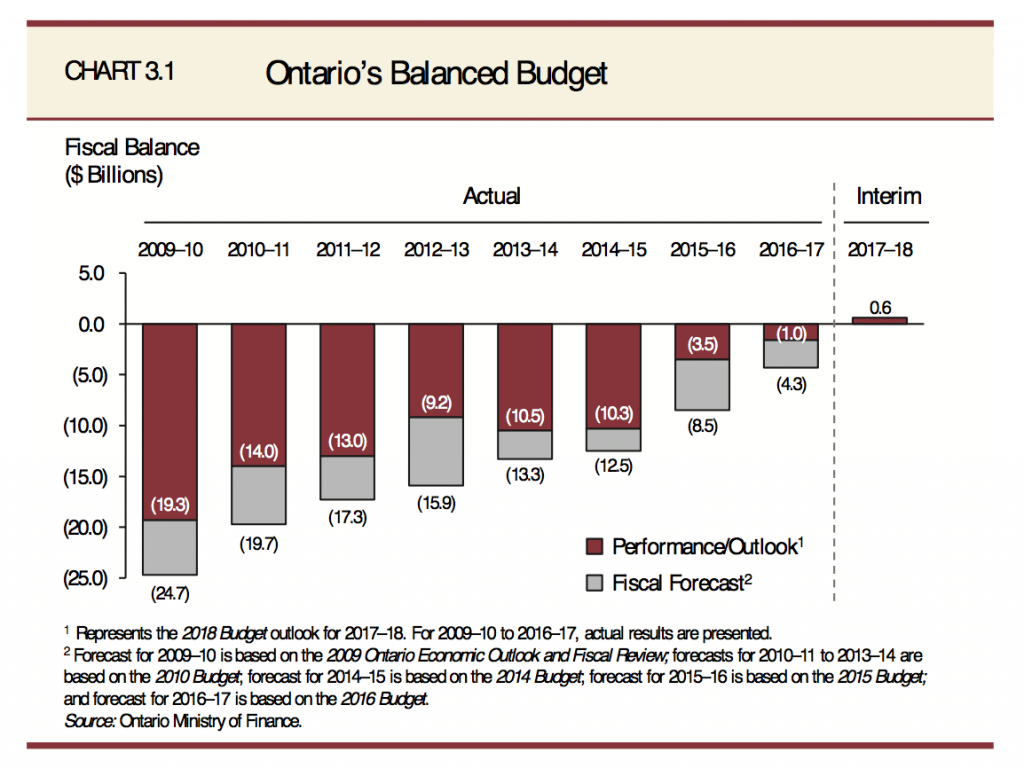 THREE: If GDP tailwinds are flagging, how safe are revenue forecasts?

The chart below shows how strong average GDP growth of 2.7 per cent helped drive the Ontario government’s move back into the black. The forecasts going forward, in an environment of higher spending, face a backdrop of a sharp drop (to 1.9 per cent) in economic growth. Typically, that would signal weaker revenue growth for government coffers. In the last year alone, the Liberals have reduced their forecast for 2018-19 revenues by $1.1 billion. 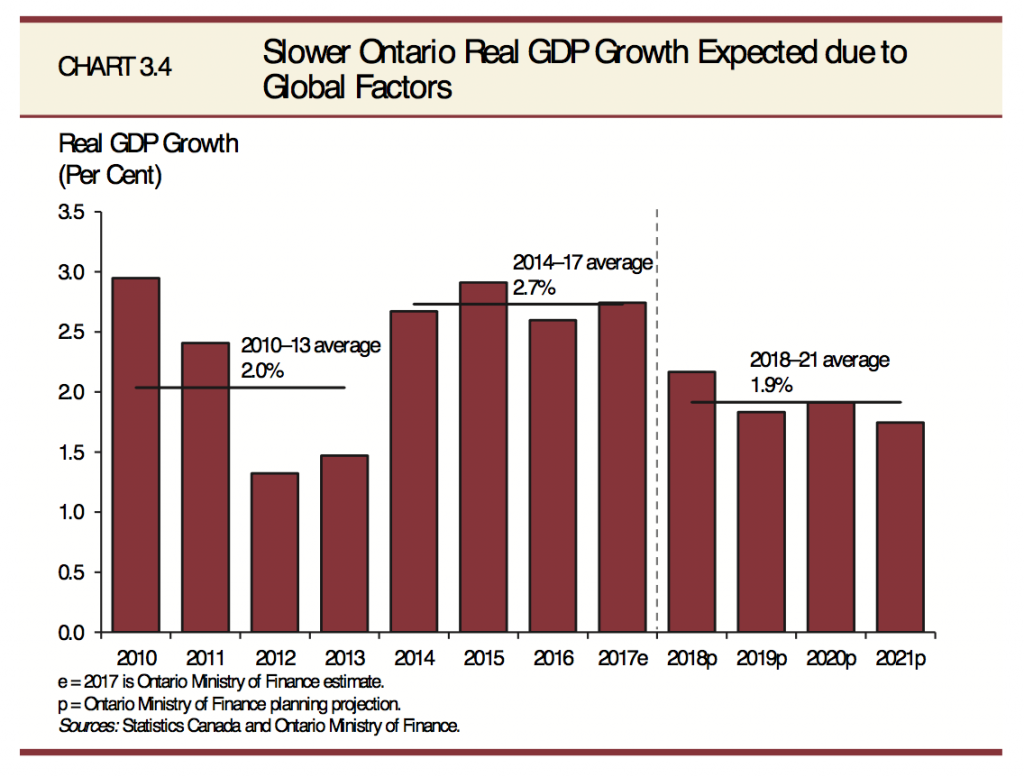 And yet, through this rough spot for the economy, the Liberals are still confident they can deliver the revenue growth to keep their projected deficits in check. Below, the top line shows what the government is expecting to collect: 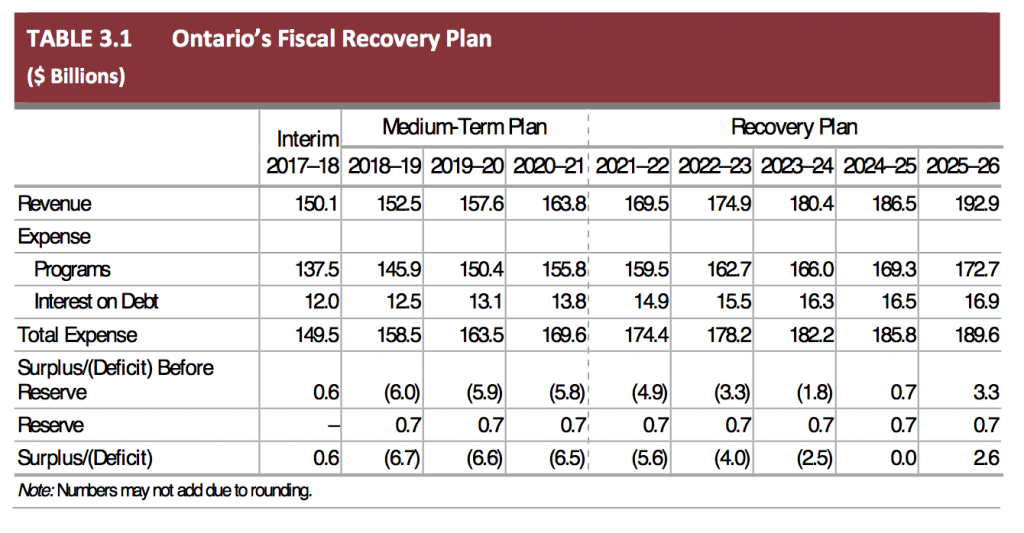 FOUR: Time for housing to hand over the reins to business investment?

In the past three years, the ongoing housing mania helped to fuel a surge in residential investment. The outlook for the next four years is factoring in a large tumble in residential activity, but is counting on a boom in business investment to offset that drag. That forecast comes from a StatsCan survey and the Liberals are confident it will come good thanks to strong demand for Canadian exports and some overdue investment by industry that is straining against capacity pressures. 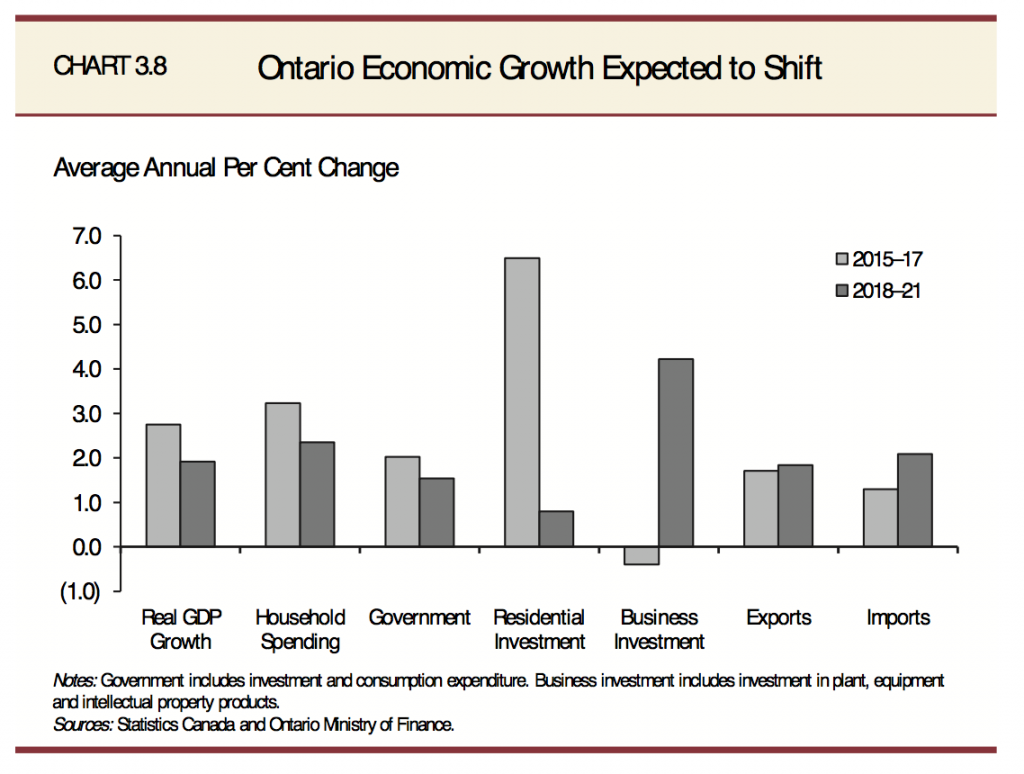 Budget documents make a case the Liberals have been smart in racking up savings on the interest paid on debt. That, of course, is a game of beating your own projections, however. And the driver behind the overall savings on the cost of servicing debt is all about a generational low in interest rates.

Debt interest costs (not including debt repayment) are actually forecast to rise at a 5.1 per cent clip through 2021, about half again as fast as spending on all government programs, to reach $13.8 billion. As seen below, you can overestimate interest rates and call it savings, but the line to watch is the bottom one (Actuals) and it’s going up. 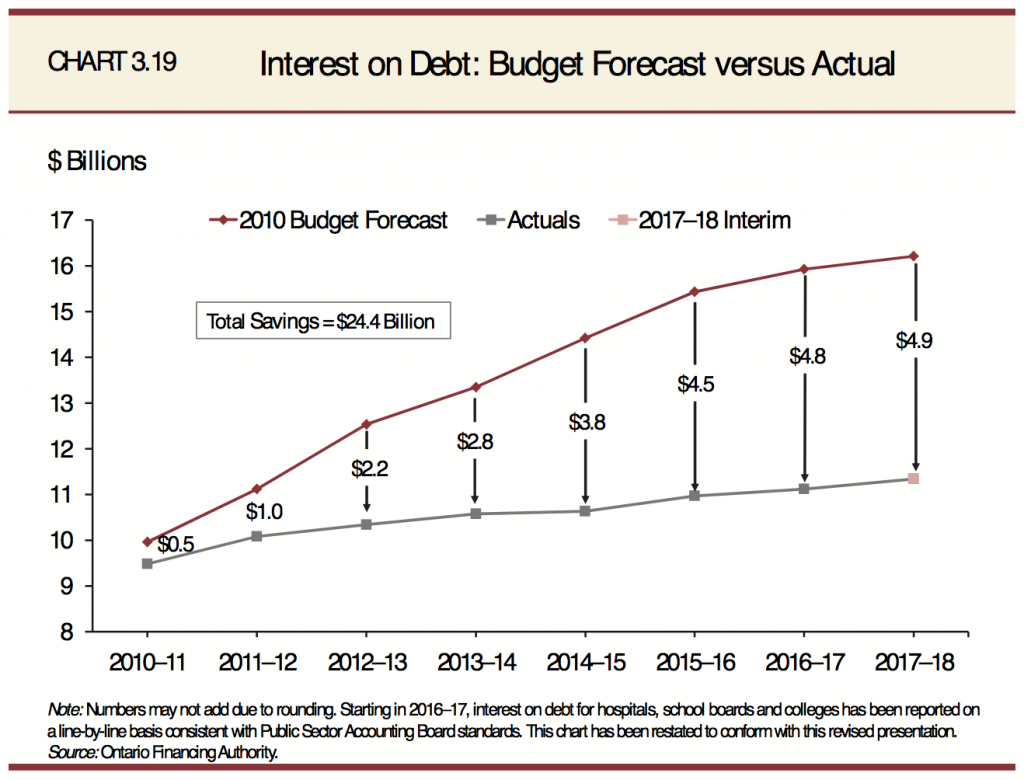 Here is a closer look (below) at how easy it has been for all governments (and the same goes for consumers with declining rates on mortgages and lines of credit) to finance debt. It’s all about lower interest rates. The trouble now is we are already into a cycle of rising rates and it could have a long way to run. For the first time in about 25 years, the cost of debt is starting to climb in a palpable way. 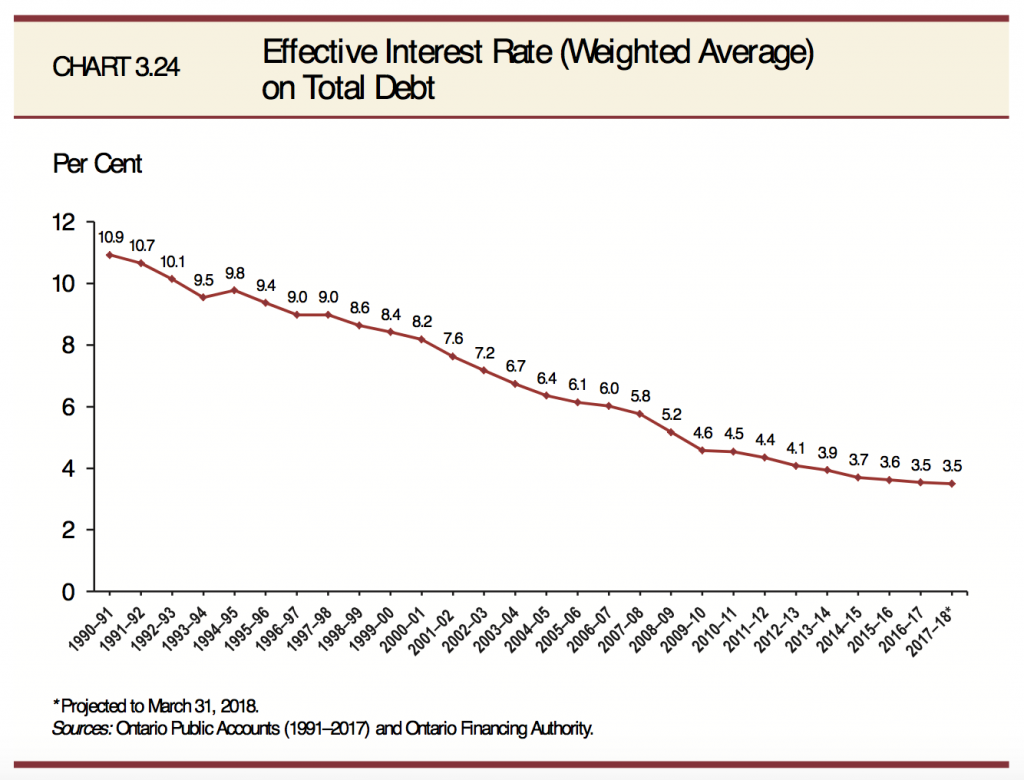 SIX: Don’t want to read all the financial lines from the budget document? Here is where Ontario’s money comes from: 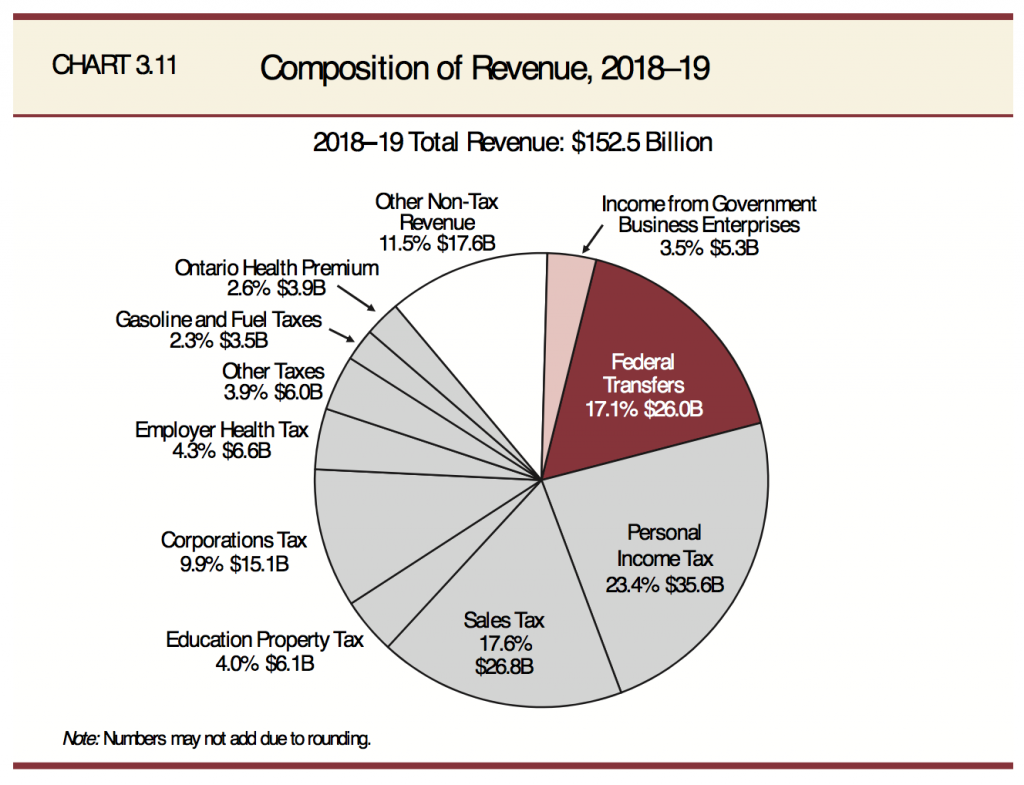 And here is where the Liberal government spends it: 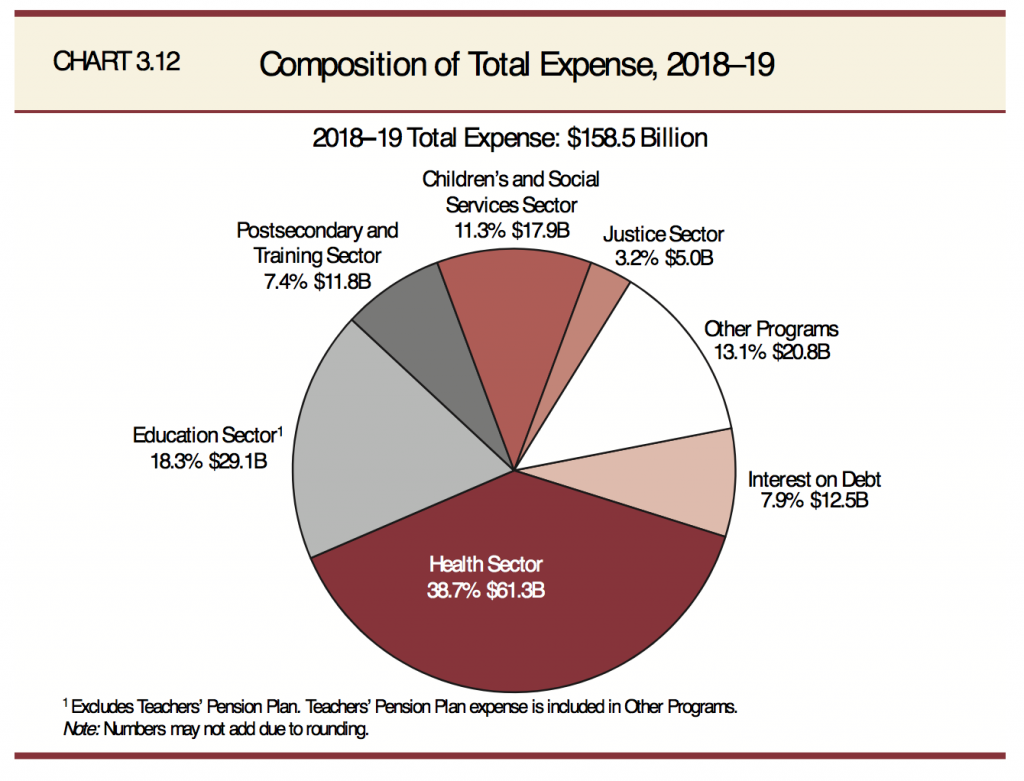 SEVEN: The chart reporters had the most fun with during the budget lockup.

Folks on the Finance team clearly got tired of making pie charts, line graphs and tables. So they visualized the path of a cresting and gently deflating Greater Toronto Area housing bubble as a city street, with clipboard street signs to represent the policy changes introduced by the provincial government and federal regulators. One writer at the Toronto media lock-up was seen driving his official 2018 Ontario Budget USB drive down the document’s street recklessly at high speeds until Finance staff served cookies and we got a special briefing from Doug Ford.

Just head to the bottom right for the bottom line: house and condo listings are down 41.2 and 30.8 per cent, respectively, year over year, while housing prices have retreated 17.2 per cent and condos are actually going for 10 per cent more: 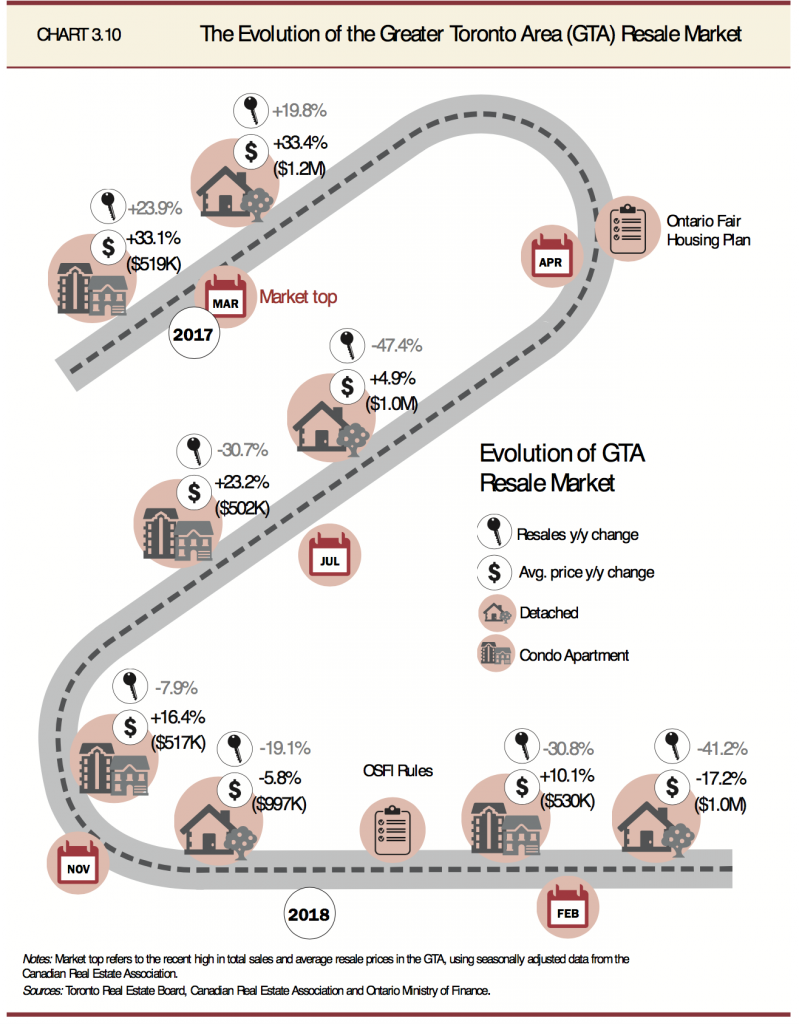