The problem with using infrastructure to stimulate the economy

The immediate boost to the economy from infrastructure stimulus spending is minimal, while the cost for any new jobs it creates can be huge 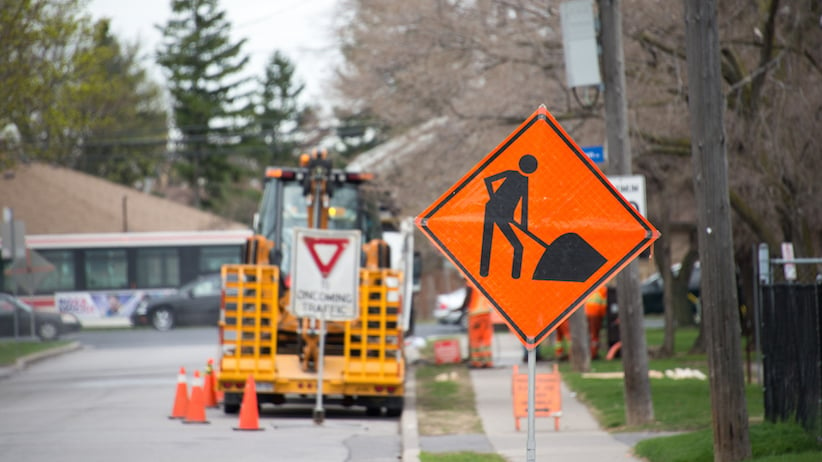 The economy seems under intense pressure at the beginning of 2016. In the first two weeks alone, Canadian stock markets were down over seven per cent, the dollar fell from over US72 cents to under 69 cents, oil prices fell from about $37/barrel to less than $30. In response, the government is “actively considering” speeding up planned infrastructure and other spending to “stimulate” Canada’s economy today. Some are even calling on the government to do more than speed up such spending, but to increase it—dramatically.

Does this make any sense? In a recent Maclean’s piece, Keven Milligan outlined several important considerations we should take into account before embarking on such a plan. If you haven’t read it yet, you should.

Building on his piece, let’s take a step back and ask some deeper questions. Does government spending boost the economy? If so, by how much? Will it create jobs? If so, how many and at what cost? How can we even know? Recent researchers have made important progress in answering these questions.

Estimating the effect of spending is very difficult. Here’s why. 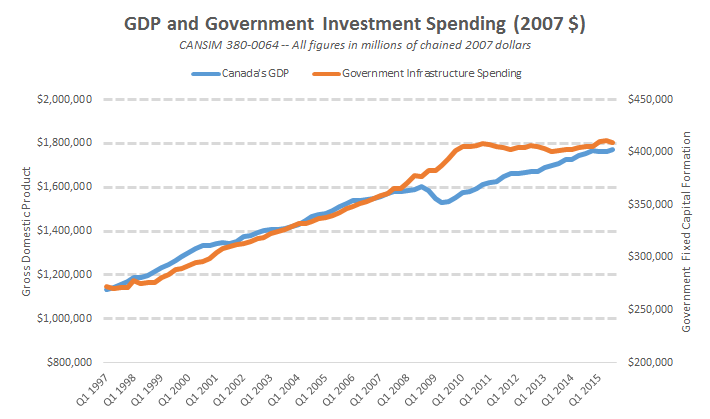 Does such a strong positive correlation mean infrastructure spending boosts the economy? Not at all. Perhaps government spending responds to the economy and not the other way around. Perhaps both respond to something else out there but aren’t related to each other. Perhaps it’s a fluke.

To see this more clearly, consider that years in which U.S. cheese consumption rise are also years in which more people die by becoming entangled in their bedsheets. Tyler Vigen in his hilarious blog, Spurious Correlations, discovered this relationship and provides an illustration:

Does this mean cheese consumption increases your risk of death by bedsheet tangling? Of course not.

Correlation does not imply causation.

This presents a serious challenge to researchers. How can we find out what causes what?

What do we know?

Of course, we can do no such experiment, so we have to rely on situations where government spending changed in a way that’s as good as random. These “natural experiments” are frequently used by clever researchers to tease out the effect of one thing on another.

So what’s a “random” change in government spending?

One idea by University of California at San Diego economist Valerie Ramey is to use news of a military conflict (see her recent paper here; ungated here). Military events are plausibly unrelated to current economic conditions, so we can use it as a source of “random” variation in government spending. She finds that each additional dollar of government spending increases GDP by between 0.6 and 1.1 dollars. This is called the “multiplier.” (She confirms this in more recent work, and also finds the multiplier fairly similar in good times and bad.)

Outside the U.S., World Bank economist Aart Kraay uses variation in World Bank lending across countries and time to identify changes in government spending (the paper; ungated version here). It turns out, fluctuations in World Bank lending can be large, affect government budgets and spending, and is pre-determined and fairly unrelated to current economic conditions. He finds the multiplier is about 0.5, though often it may not be significantly different than zero. So, this suggests one dollar of increased government spending may increase GDP by $0.50.

There are many other papers out there, and this is only a taste to give us a sense of the magnitudes and the empirical approaches. (For a nice review of this literature, see this 2011 review.)

There are good reasons to suspect Canada has a smaller multiplier than the United States. In particular, we’re a small and open economy with a flexible exchange rate. These characteristics are critical to the effectiveness of government spending. If government spending rises, then the Canadian dollar may appreciate. A more valuable dollar will then tend to lower exports and therefore GDP. The lower net exports, under some conditions, completely offsets the increased government spending.

Indeed, this is confirmed in recent empirical work (ungated version here). The authors find that in countries with a flexible exchange rate (like Canada), the effect of government spending on GDP is roughly zero. On the other hand, this paper by Valerie Ramey and Sarah Zubairy suggests a multiplier in Canada of just under 0.5 in normal times. (Quick aside: some of the data in this paper is pre-Second World War, when Canada had a fixed exchange rate. This may explain the different results.)

Of course, these are just some estimates. The government of Canada has its own preferred numbers. (None of their multipliers are zero, though they aren’t based on well identified empirical estimates. See Table A.1 here. Thanks to Stephen Tapp for showing me the table.)

In any case, let’s see what effect this spending has on Canada’s economic growth rate. 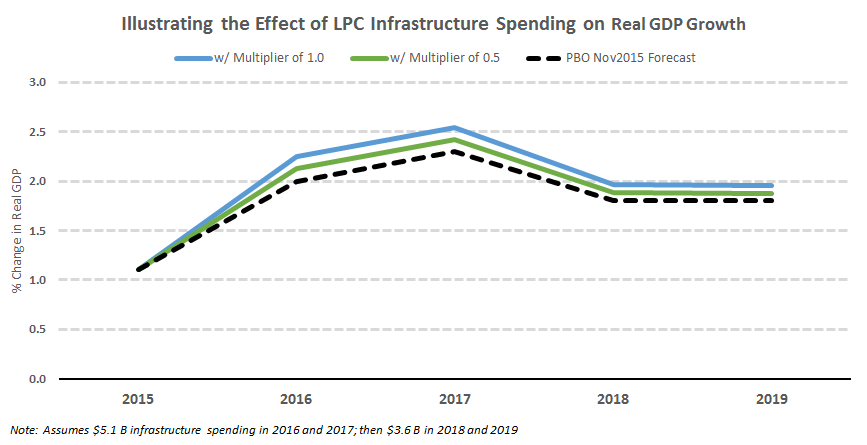 Even if we generously assume a multiplier of one, the 2016 economic growth rate would increase only marginally to 2.25 per cent from the previous PBO forecast of two per cent. Hardly a meaningful boost to Canada’s economy. Even with this generous multiplier, what would the government need to spend to increase GDP growth by a full one per cent? About $20 billion per year. With a multiplier of 0.5, a full $40 billion per year would be needed. If the multiplier is zero, then no amount of government spending would change GDP.

(Of course, infrastructure affects the economy by increasing the productive capacity of workers and firms. A road improves productivity. Schools increase education levels, which improves productivity. And so on. These all have important medium- and long-run implications for an economy. So think about the results above as the short-run “simulative” effect on GDP, rather than any increase due to higher productivity, which is a separate question.)

What about job creation?

Infrastructure stimulus spending is often sold as “creating jobs.” Does it? If so, how many jobs are we talking about? And how much infrastructure dollars are required per job created?

How strong is the relationship? Some recent Bank of Canada research suggests that if output grows by between two per cent and 2.6 per cent the unemployment rate tends to fall by about one percentage point. This is a simplification, but gives us a good back-of-the-envelope way to think about how many jobs we’ll get from infrastructure spending.

So, let’s imagine spending $5.1 billion on additional infrastructure. If the multiplier is one (which, again, is being very generous), GDP will grow by $5.1 billion. As Canada’s economy is about $2 trillion, this represents a 0.25 per cent increase. Taking the “Okun’s Law” results above at face value, the unemployment rate will fall by roughly 0.1 percentage points—which represents about 20,000 workers. So, it would cost $5.1 billion to create 20,000 jobs—or roughly $250,000 per job. That’s huge.

Here’s how it all shakes out:

These are massive numbers that suggest infrastructure spending as a job creation strategy just doesn’t make economic sense. If all we care about are the jobs, we’d be better off hiring workers to sit around and do nothing all day. It would cost less. It’s also entirely possible that no jobs are created at all—all new infrastructure jobs might be exactly offset by job losses in other sectors. In this case, jobs shift instead of new ones being created.

There may be important benefits of infrastructure over longer time horizons, through their effect on productivity and the economy’s “potential” GDP. But we shouldn’t overestimate infrastructure’s short-run effects on economic activity. There just isn’t the evidence. We also shouldn’t think that the primary purpose of infrastructure spending is in the jobs that it may or may not create. It’s just far (far) too costly per job created.

Of course, infrastructure projects may be valuable for their own sake. A bridge may be sorely needed in some areas. More buses for a growing city may make sense. More roads may ease congestion (although, not likely). Nothing in the above evidence denies this. If a project can pass a reasonable cost-benefit test, then go for it; if not, then don’t. A bridge is not an economic stimulant—it’s a bridge.