Like the coronavirus, fear is contagious, and it's leading shoppers to do some crazy things 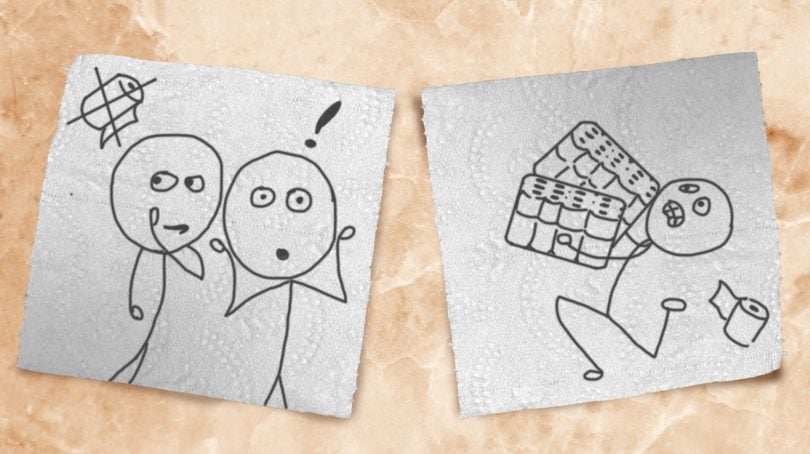 It’s become an all-too familiar image from the coronavirus scare of 2020—aisles of empty store shelves bereft of products like hand sanitizer, cans of soup and face masks. Oh yes, and toilet paper.

It’s that last item that has struck many as most puzzling. The symptoms of Covid-19, a respiratory illness, don’t suggest a need for vast quantities of toilet paper, while toilet paper manufacturers themselves say there have been no disruptions to their supply chains. So why has panicked buying and hoarding been so widespread, not just in Canada but in every country impacted by the virus?

“Fear is contagious,” says Steven Taylor, a professor of psychiatry at the University of British Columbia and author of the Psychology of Pandemics. “We pick up cues by looking to other people—it’s how stampedes happen in stadiums—so if you’re in a shopping centre and you see some people around you acting in a frightened way and stocking up, that’s going to have a fear contagion effect that causes other people to start over-purchasing.”

READ MORE: Taking things day-by-day during the end of days

There has been no shortage of such scenes on social media and in news reports to reinforce that fear. Last weekend in Australia two women came to blows over a shopping cart filled with packages of toilet paper. In charging the women, ages 23 and 60, one New South Wales police officer asked the public not to panic when shopping. “There is no need for it,” said Acting Inspector Andrew New. “It isn’t the Thunderdome, it isn’t Mad Max.” Similar scenes, minus the fisticuffs, have emerged from Hong Kong, Japan, the U.K., Europe, the U.S. and Canada, among others.

Panic-buying often starts with a rumour that a product, in this case toilet paper, is in short supply. Some of the first tweets to come out of Hong Kong on Feb. 5, where the toilet paper panic began, cited “troubling online rumours” for frenzied hoarding.

Taylor says officials have added to the problem be urging people to stock up with supplies should they have to quarantine themselves . For instance last Wednesday federal Health Minister Patty Hajdu advised Canadians to have enough supplies on hand for “a week or so … It’s good to be prepared because things can change quickly.”

“It started with sensible advice from authorities to stock up on food, toiletries and prescription medication, but that simple message backfired spectacularly because it’s so hard to predict how people will respond,” says Taylor.

For one thing, he says, there’s uncertainty “about how much you need because you don’t know how bad things will get.” As some anxious shoppers began stockpiling a month or even six months worth of supplies it created an “exaggerated sense of urgency and a fear of scarcity” he says. “A fear of scarcity leads to actual scarcity and the whole thing snowballs.”

More personal anxieties shouldn’t be discounted either. Everyone across the toilet-papered world has at some point been in the situation of reaching for a roll only to realize the cardboard is empty and no one else is home to get you more. The prospect of being left toilet paperless at a time of a looming pandemic taps into that feeling of helplessness.

READ MORE: Canada needs a coronavirus stimulus plan. Here’s what it should look like.

The frenzy for toilet paper is not all that different from a run on a bank when customers, who might suddenly grow worried about the solvency of a bank, attempt to withdraw all their deposits at once. The fear of losing your life savings is powerful and because bank runs can be disastrous for the economy, governments decades ago established deposit insurance agencies to reassure customers their money is safe. No similar guarantees exist in the world of toilet tissues, though retailers have begun limiting the number of toilet paper packages customers can buy at any one time.

Unlike banks, which only keep a fraction of depositors’ money on hand in cash, there’s been nothing to limit the supply of toilet paper moving from manufacturers to retailers other than the ability of some stores to keep shelves stocked. According to Christine Beaulieu, a spokesperson for Cascades, one of Canada’s largest forest products producers, the company is monitoring the Covid-19 situation and everything has been running smoothly. “Based on the information received from our governments and our Health Centre of Expertise, we understand that the risk of disruption to our operations remains low,” she said in a statement. “Our supply chain has taken the necessary measures to secure our operations and ensure the continuity of services.”

Investors have certainly noticed the hoarding phenomenon. While the overall Toronto Stock Exchange has shed close to 20 per cent of its value since the first week of February, when early signs of toilet paper panic emerged, shares in Cascades and fellow manufacturer KP Tissue are up two and four per cent respectively.

Similar episodes have happened in the past. During the Spanish Flu outbreak in 1918, a panic erupted around Vicks Vaporub, notes Taylor. The company’s website says that in just one year during the outbreak sales of the product grew from $900,000 to $2.9 million and that the company had to run its plant day and night to keep up.

Nor is this the world’s first mass panic over TP. In 1973, amid an oil crisis and electricity shortages, North America was flung into toilet paper frenzy by none other than late night host Johnny Carson. After news agencies quoted a Wisconsin congressman warning about toilet paper supply disruptions, Carson made light of the supposed shortfall on his program. “You know, we’ve got all sorts of shortages these days,” he told his audience.”But have you heard the latest? I’m not kidding. I saw it in the papers. There’s a shortage of toilet paper!” Rather than laugh out loud, American consumers rushed to grab as many rolls as they could before they were all gone. The ensuing hysteria lasted for four months even though, like now, toilet paper producers said there was nothing limiting their ability to churn out rolls. The industry and retailers simply couldn’t keep up with the irrational level of demand.

Like that episode, this period of toilet paper hoarding will end. There are already signs of that happening. “Society has self-correcting mechanisms for such things,” says Taylor. People on social media have begun ridiculing the phenomenon, and as a result a stigma against toilet paper stockpiling will set in in people’s minds.

But just because consumers abandon their TP frenzy doesn’t mean we’ve seen the end of stockpiling during the coronavirus outbreak. The inability for anyone to know how long this ordeal will last or how bad it will get combined with the ease with which social media transmits images of empty store shelves creates a potent environment panic-buying to spread. “These things are fads and this toilet paper craze will burn itself out, but another will just pop up,” says Taylor.