When Canada liberated a nation from tyranny

J.L. Granatstein: 'The Dutch remember. They teach their children about the war in their schools. On Christmas Eve every year the children of Holten go to the Canadian cemetery to light a candle on each grave to make the point that freedom had—and still has—a price.' 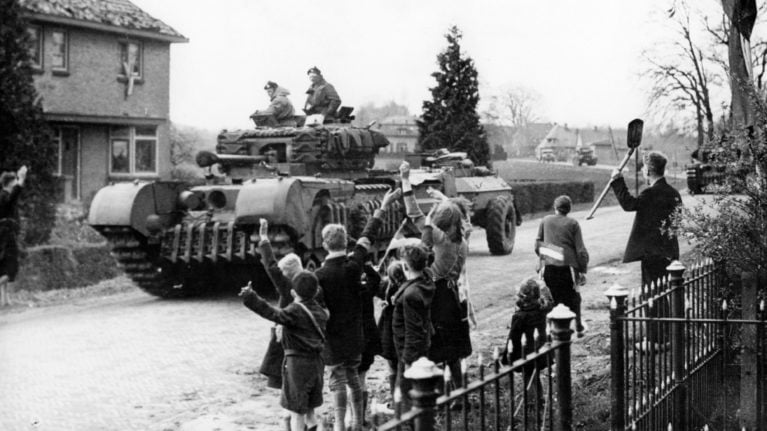 Picture released on April 12, 1945 of Dutch civilians waving to the Canadian soldiers driving through their village. (AFP/Getty Images)

Historian J.L. Granatstein is the author of The Best Little Army in the World: The Canadians in Northwest Europe, 1944-45

I had the good fortune in May 1995 to go with a CBC television crew to the Netherlands to cover the 50th anniversary of the end of the Second World War. We began in Holten, a small town in north-east Holland where there is a Canadian War Graves Cemetery with 1,394 soldiers buried there. Most of the dead had been killed in the Netherlands, but many had died in the fighting in Germany in the last weeks of the war. General Harry Crerar, the commander of First Canadian Army, had fought the Germans in two wars, and he had ordered that his soldiers’ remains be brought to Holland so they could rest in friendly soil.

What struck me at once were the many Dutch families moving quietly around the rows of headstones, each with a carved maple leaf and the name, date of death, and unit of the soldier. I couldn’t understand what the Dutch were saying, but I had no doubt that the parents were telling their children that these men had come from Canada to liberate their country: Do not forget what they did for us. Remember that we are free because of them.

The Dutch had every reason to remember their liberation. For five years, the Nazis had brutalized and starved them, sent Dutch Jews to Auschwitz, shipped men to the Reich to work as slave labour, looted their nation, and executed Resistance fighters until the last few days of the war. Even a half century later freedom was precious.

From Holten the CBC crew went to Apeldoorn in central Holland. The town of some 100,000 was decorated everywhere with Canadian and Dutch flags, and one obviously handmade banner hung over the street I walked to and from our hotel. “Bless You Boys!,” it said in English.

We set up in the town square to cover the victory parade that would mark the anniversary. There were perhaps 15,000 Canadian veterans there, men and a few women, and the parade was supposed to last two hours. But so huge was the crowd—a half million, the police estimated—that the procession ran for eight hours. That the vets lasted that long was a tribute to the exhilaration that overcame the aches and pains of 75-year-old bodies.

This was the most extraordinary event I have ever seen. As the vets marched or rode through the cheering throngs, they were mobbed, showered with kisses, handed drinks, cigarettes, and flags in an astonishing outpouring of gratitude. Grandmothers grabbed vets and danced on the road. Young mothers, cheering and sobbing simultaneously, held up babies to kiss a weeping vet, and then would tell a Canadian reporter that they had done this so their children would know forever that they had touched one of their nation’s liberators.

READ: Why Canada’s casualties were so high in Normandy

The Dutch remember. They teach their children about the war in their schools. On Christmas Eve every year the children of Holten go to the Canadian cemetery to light a candle on each grave to make the point that freedom had—and still has—a price. And all this attention to the past showed during that moving, astonishing day in Apeldoorn.

Do Canadians remember? Do we teach our children and new Canadians that freedom has a price and must be defended? The Second World War was a time of supreme national effort for Canadians who produced a remarkable military, industrial, and agricultural contribution to victory. Ten per cent of the population of 11 million donned uniform, and the war effort, starting from nothing, was such that Canada was able to give away billions of dollars in food and military supplies to our allies. The army, navy, and air force fought in every theatre of war, and Canadians earned a high reputation for valour.

There were planned commemorations this month in Canada and the Netherlands for the 75th anniversary of V-E Day, but the pandemic put an end to them. A handful of the 30,000 surviving Canadian veterans had planned to return to Holland one last time. Others would have attended the quiet ceremonies at home. The vets certainly remember. The grateful Dutch do not forget, but all Canadians should know that it is a great, good deed to liberate a nation from tyranny. Bless you boys.