Bugs are people, too

Common insects get the close-up treatment, revealing more depth than may be expected

Lying down on a forest floor in Japan or Quebec or Costa Rica, Royal Geographical Society (RGS) photographer Paul Parent waits patiently for his portrait subjects to arrive. You need precise conditions to capture such elusive creatures, who can be flighty, beautiful and biting—literally. Parent has been photographing high-saturation macro portraits of insects around the world since 1998, after first picking up a Nikon in 1976. “I became an RCGS fellow by sharing my pictures and knowledge of the part insects play in our lives,” he says. “Half of Canadian plants and flowers are pollenated by insects. They’re the basic food of lots of fish, birds and mammals.” It can take three days on average to complete a portrait; Parent shoots on a Nikon using a tripod, finely tuning the saturation and contrast to achieve bold colours and fine details. The result anthropomorphizes the insects—an orchard mason bee looks shy; a yellowjacket, duplicitous. Parent’s work has been shown in Glasgow and Ottawa, but photography isn’t his day job (he earns his living working in logistics). “I wasn’t looking to make a career, just share my passion,” he says. “When I’m looking at a person, I don’t see the end product. When I look at an insect, I know what the picture’s going to look like.”

Bugs are people, too 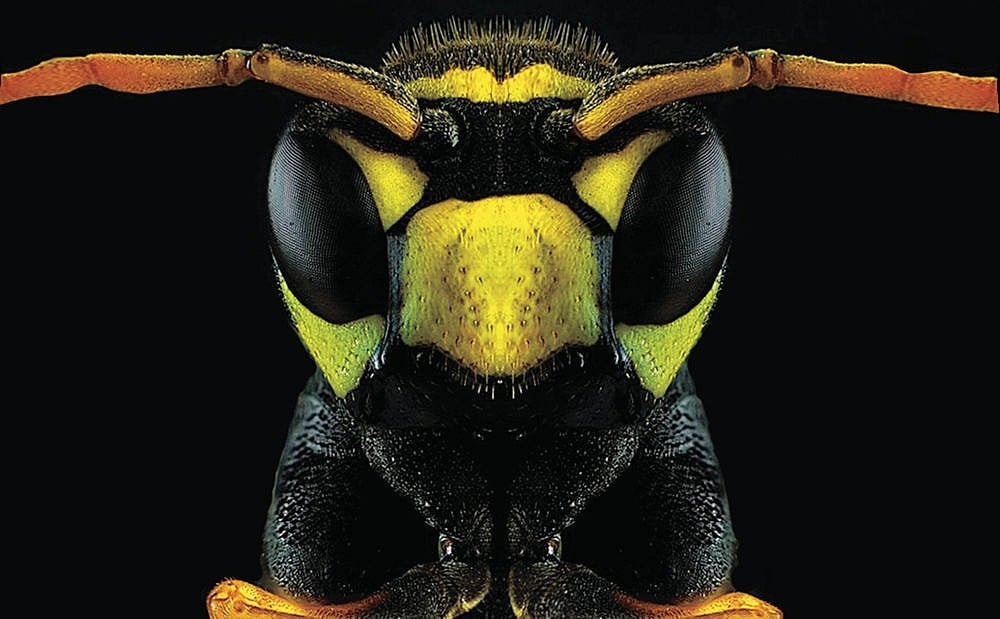 Alaska yellowjacket (Vespula alascensis): The villainous vibe of this common wasp found in North America is apt—yellowjackets sting, so, unless you’re a pro, steer clear

This photo essay appears in print in the September 2021 issue of Maclean’s magazine with the headline, “Bugs are people, too.” Subscribe to the monthly print magazine here.