Running with the herd 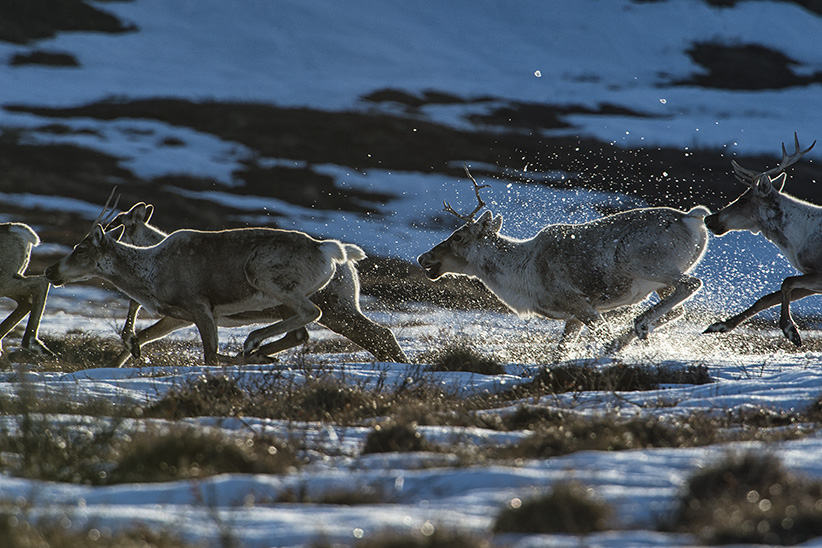 Over the years, Yukon-based photographer Peter Mather has faced his share of struggles to capture images of the Porcupine caribou during their annual migration. Just this spring, his bush plane was forced down due to a technical problem, forcing Mather, dragging 136 kg of gear, to ski 100 km—mostly at night, when the lingering snow was reliably firm—in order to try to meet the herd.

That’s nothing compared to what the caribou undergo to reach their calving grounds. At 1,000 km each way, it’s one of the longest land-mammal migrations in the world. To birth their young, female caribou move north in spring, from the interior and over mountain terrain, through deep snow and slushy rivers, to reach a safe spot where food is bountiful and predators are few. They return south in summer with 50,000 new offspring. Only about a third will survive to adulthood, due to predation by grizzly bears, wolves and eagles.

But the summer habitat has been under a more persistent threat: The calving grounds, a grassy plain along the Arctic Ocean coastline, form part of Canada’s Ivvavik National Park and the Arctic National Wildlife Refuge in Alaska, which lie side by side on the Beaufort Sea. A portion of the American side is not officially protected from development, and the threat of oil and gas exploration has loomed over the sensitive area for decades.Many remote northern First Nations, such as the Gwich’in people, still rely on the caribou for their sustenance and culture, and have been fighting to keep the area wild.

In April, U.S. President Barack Obama and the U.S. Fish and Wildlife Service urged greater protection for 4.9 million hectares of the refuge, including its coastal plain, which could hold an estimated 10 billion barrels of oil. It will take an act of Congress to permanently protect the land.

Mather, 40, started taking photos of the 197,000-strong herd a decade ago, and was compelled to return year after year. “It’s a great story,” he said. “The Gwich’in people are a powerful people and a powerful culture, and I just find the caribou amazing.”