The deep similarities between Canada and the U.S. 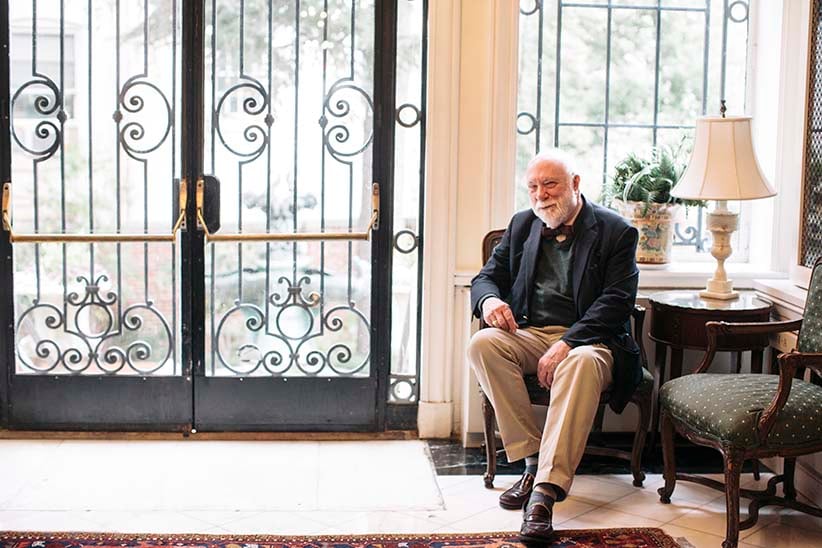 Robert Bothwell, a scholar of Canadian history and professor at the University of Toronto. (Photograph by Lexey Swall/Getty Images)

Robert Bothwell, 71, the Gluskin professor of Canadian history at the University of Toronto, has spent much of his career considering the common civilization—divided into two nation states—that exists in northern North America, and their usually peaceful but sometimes vexed relationship, from intense free trade debates to the Keystone pipeline. Values are much the same on either side of the border, Bothwell argues in his new book, Your Country, My Country: A Unified History of the United States and Canada, but the two countries are not always in sync. Even when they are, says Bothwell, the accidents of history often put them on different paths. At least for a while.

Q: The central theme of your book is that any American arguing for U.S. “exceptionalism,” its uniqueness among nations, can only do so by avoiding looking northwards.

A: An American colleague wrote a book on U.S. foreign policy, which I read for him prior to publication. When he came to Ottawa, I brought up the section which read, in effect, “the United States has gotten along badly with all its neighbours—the relationship has been hostility and conquest and war.” I asked, “Where do you think you are, and how do you interpret Canadian–American relations in this way?” That is the situation: most Americans, even informed Americans, don’t think of the deep similarities and the way we have interacted for two centuries.

Q: When you do point out the similarities, do you not get—at least from the right—“Canadians may look and act like us, but those socialistic tendencies . . .” And a lot of Canadians would resist this similarity between the nations, given how divergent we seem to have become in the 21st century. Religion, guns and Republicans: we don’t have equivalents to those, do we?

A: That’s true enough. And that’s [pollster] Michael Adams’s point, that some Canadians are very different from some Americans. What I’m saying is you cannot generalize all Canadians and all Americans into these slots—there are lots of differences, God knows, between me and Republicans, although my ex-Canadian and now-American brother is Republican. But as other pollsters have shown, the differences are really regional: compare New England with the Maritimes, or New England with Ontario, the Cascadia of B.C. and the American Pacific Northwest, and the differences are not huge in terms of attitudes and political stance. Some differences, sure, but they’re not major. On the other hand, if you compare, say Oklahoma or Ted Cruz with the Wildrose party in Alberta, you end up asking: what is the difference?

Q: So there are regional, trans-border pockets of common opinion?

A: We’re often out of phase with the Americans, or more properly, the same thing happens at different times. I would always argue to my students that Canada is not necessarily or inherently a left-wing country, and the United States is not necessarily the citadel of right-wing liberty. The obvious case there is [Franklin Roosevelt’s] New Deal, which made the Americans much further left than the Canadians at the time, and Americans coming to Canada found us backward, conservative, and out of tune with the kind of free-spirited liberalism that there was in the States. Then things reversed, with medicare the prime example. We like to say medicare is uniquely Canadian, but Americans have Medicare too. Even the name. I can’t actually determine where the name started, except that it appeared in the two countries at about the same time. Had the Vietnam War not occurred, the Americans would have had a Medicare system much like ours.

Q: It was the war cost that prevented it?

A: More like it distracted them. But Lyndon Johnson’s idea, and the testimony of the people who designed the American Medicare system, was to do it “tranche by tranche,” starting with the over-65ers, and the next stage would be “kiddie care” and then they’d make up the difference in between. Johnson certainly wanted single-payer [government-financed] health care, but so did Harry Truman back in the ’40s, and so did Richard Nixon. Periodically the Americans come up with it. The first batch was a Medicare system very similar to the one that we have. And then Bill Clinton came up with that godawful mess that he was trying to put forward in the ’90s, and Obamacare sort of runs like a Rube Goldberg machine, although it runs. So I just don’t see the inherent differences.

Q: These similarities go back to the beginning, to the very place Canadians tend to see as the root time and place of their differences with Americans. The Loyalists, that is, British anti-Americans by definition. But you show how few they were in number, and how soon they were followed here by larger numbers of so-called Late Loyalists, that is by Americans.

A: That part is funny, and some of the children of the Loyalists went back to the U.S. and sided with the Americans in the War of 1812. When, after the Revolution, the British offered free land in Canada, well, the American identity wasn’t formed yet. These people had been born under the king, and, what the hell, [moved] back under the king, because the king was giving free land.

Q: Then there was that great circular movement of people after Confederation. Canada, as you describe it, was almost a failed experiment: 825,000 Canadian-born headed south between 1870 and 1890 from a population that registered 4.8 million in the 1891 census. They were followed by Americans heading north for free land in the West during the Laurier boom.

A: We lost a whole generation: the Maritime provinces contributed to it, and Ontario. And Quebec, of course, with French-Canadians heading to New England mills. My own family, too. My grandfather had five brothers, of whom two stayed in Canada, and the other three went to Nebraska and Iowa. There was complete freedom of movement down to about 1900, and just walking across the border was as easy as could be for Canadians. They all blended in seamlessly, the Anglos, that is. The French stayed distinct until the 1940s, by which time they’d lost their language.

Q: The polls indicate about half of Canadians are happy enough with the death of Keystone, however queasy they may feel about an American President bigfooting it.

A: Yeah, but it was a major political issue in the United States and, in that sense, Republicans acted as sort of a Greek chorus behind Obama, chanting away about the XL pipeline, and actually enhancing and making easier Obama’s position. Yet I can’t help but think that if Stephen Harper had handled it differently, then the pipeline would have gone through, whether a good thing or a bad thing. We managed it so ineptly—politically, diplomatically—that I think we created the outcome that Harper did not want. You don’t systematically disagree with the President of the United States or intervene in American politics and expect that he is going to bless your name.

Q: Do you think Keystone had any kind of linkage to other Canadian–American issues?

A: In an indirect way, indirect because—as is very much in our interests—we segment issues as much as we can. The history of the Keystone issue still has to be written, but from what well-placed people tell me, Harper and Obama didn’t get along and that mattered. It showed at the G20 in Toronto in 2010 when the Americans were really disappointed in Harper. They wanted the nations to agree to carry on stimulus, anti-austerity measures, but Canada took the other side. Obama, I gather, was expecting support, perhaps naively, and [was] unhappy he didn’t get it. That may have started it. There was also the Canadian consulate leak in 2008, the closeness in political views and methods of the Conservatives and Republicans—Obama couldn’t have missed that—and the pipeline came around about then. Harper’s decision to really push it amounted to taking sides in U.S. politics.

Q: Are we in a particularly volatile period in our relations with the Americans now?

A: I don’t think so. We still face many of the same problems, and we have the same attitudes, even if you boil it down to particular issues like trade policy and the TPP [Trans-Pacific Partnership]. In both Canada and the United States there are elites—professional elites, business elites—in favour of the TPP or the CETA [Comprehensive Economic and Trade Agreement with Europe], and a lot of people wondering about the effects and whether their particular country is subscribing to some sort of religious cult whose god is free trade. Still, it’s never hard to figure out how things could go wrong with the bilateral relationship.

If it ever happened that a really nationalistic American government were elected, we’d have a problem. We’ve never had to confront that since the War of 1812. But if it ever happened, it would be trouble for us. Such a government would be prepared to use trade as a club in dealing with us—one of many, if it decided to take American power out for a walk around the block. I don’t mean military occupation or anything like that, but a desire for unquestioning adherence to whatever the nostrum of the day happened to be. That’s rather scary. We’ve never had to deal with an American president who was completely a wing-nut.