The seven-decade journey from Auschwitz to justice for the Rohingya

The world's 'never again' vow on genocide became a cliché of broken promises. But a recent decision at the International Court of Justice could be a turning point 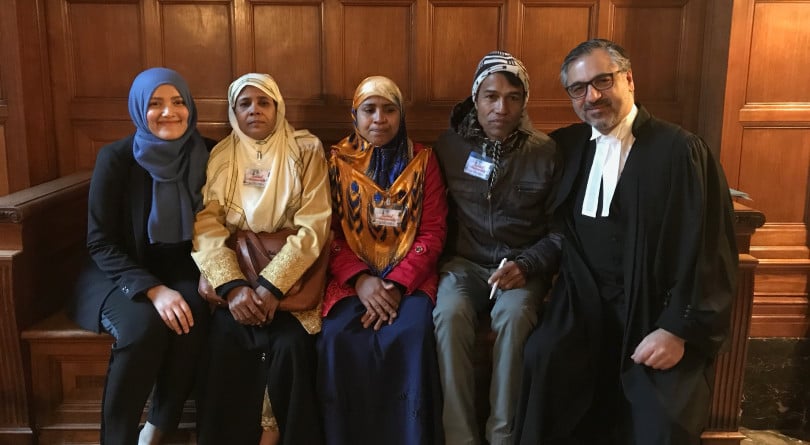 On Jan. 27, 1945, a scouting party from a column of Soviet Red Army soldiers who were marching through Poland on their way to Krakow happened upon a strange, half-destroyed industrial complex just outside the town of Oświęcim, better known as Auschwitz. There were corpse heaps, and great mounds of ash, and from behind barbed wire fences roughly 7,000 Jews, reduced to human skeletons, staggered towards them.

What the soldiers had discovered was the remains of a vast slave-labour mill, a massive crematorium, a concentration camp that had been mostly torn down and evacuated, except for the nearly dead, only a few days earlier. Of the six million European Jews exterminated during the Nazi reign of terror, more than a million had spent their final days at Auschwitz.

It was nearly four years later, on Dec. 9, 1948, that the General Assembly of the United Nations unanimously adopted the Convention on the Prevention and Punishment of the Crime of Genocide. And 71 years and a day after the world had pledged, “never again,” McGill University professor Payam Akhavan stood before a panel of 17 judges at the International Court of Justice in The Hague, Netherlands, to table an urgent request.

RELATED: Canada has recognized the Rohingya genocide. Now what should come next?

“There is still time to save the Rohingya,” Akhavan began. “We turn to this court as the guardian of the Genocide Convention, to prevent their further destruction at the hands of Myanmar.” That was on Dec. 10. And last week, in a unanimous decision, all 17 judges granted something like injunctive relief, or a kind of restraining order, requiring Myanmar to cease and desist from all acts that United Nations investigators have already determined to constitute genocide against the Rohingya.

At least 10,000 Rohingya people have been killed over the past three years, and thousands subjected to rape and horrific sexual violence. Their villages have been burned, their crops razed and livestock slaughtered. Roughly a million have either fled or have been driven into neighbouring Bangladesh, and about 600,000 Rohingya who remain in their homelands, in Myanmar’s Rakhine state, continue to suffer violence and atrocious persecution.

The ICJ judges also ordered Myanmar to preserve evidence of the genocide that the Myanmar military is charged with having inflicted upon the Muslim minority in a recurring wave of mass killings and ethnic cleansing that intensified in ferocity in August 2017. The judges further instructed Myanmar to report every six months on the exact steps it is taking to comply with the court order.

“It was astonishing,” Akhavan told me.

RELATED: Canada was warned of the coming Holocaust. We turned away 900 Jewish refugees, anyway.

It’s not just that Myanmar’s own appointed judge on the panel agreed with the majority, or that the judges appointed by Russia and China—two veto-holders on the UN Security Council that have blocked previous attempts to rein in Myanmar’s brutalities—also agreed. It was that the case against Myanmar was filed by Gambia, a small African state not directly effected by the Rohingya crisis, and it wasn’t just an action supported by Canada and the Netherlands. Gambia came to court with the backing of a 57-nation UN voting bloc, the Organization of Islamic Cooperation, which is not known for its devotion to the cause of universal human rights.

“These kinds of moments are very, very rare,” Akhavan said. “There I was, and there was the ambassador of Saudi Arabia sitting in the court, and the ambassador of Senegal and the United Arab Emirates, and they’re all there to cheer on a human rights trial in the Hague. It was really encouraging. It was highly commendable that they were so supportive.”

But in its way, it’s already historic. This is the first time a UN member state that isn’t directly a party to a dispute has relied on its adhesion to the Genocide Convention to bring an action before the ICJ. The UN’s top judicial body, the ICJ ordinarily adjudicates disputes between UN member states involving consular cases, conflicting territorial claims, civil aviation and so on.

It’s also the first time a case before the ICJ is unfolding in tandem with a case before the International Criminal Court, where Myanmar is being investigated for crimes against humanity—based on the status of Bangladesh as an ICC signatory. And it’s the first time a UN member state has been instructed to report on the steps it’s taking to prevent the continuation of its alleged genocidal conduct.

RELATED: Unliked: How Facebook is playing a part in the Rohingya genocide

Last September’s final report of the UN fact-finding mission on Myanmar concluded that Myanmar’s actions constituted genocide, there was a “serious risk of genocidal actions recurring,” and that Myanmar was “failing in its obligation to prevent genocide.” Those findings came two years after the UN High Commissioner for Human Rights called Myanmar’s persecution of the Rohingya “a textbook case of ethnic cleansing.”

Myanmar’s claim is that its own legal system is dealing with crimes committed in Rakhine, which should be understood in the context of civil disturbances arising from efforts by Myanmar’s military, the Tatmadaw, to counter a separatist insurgency waged by Harakah al-Yaqin, also known as the Arakan Rohingya Salvation Army.

During the ICJ’s hearings last month, Aung San Suu Kyi, the titular leader of Myanmar’s civilian-military government, attended in person to assert that claim—which isn’t helped by her government’s refusal to grant UN investigators access to the Rohingya territories. Suu Kyi earned herself a Nobel Peace Prize in 1991 for her efforts to move Myanmar towards a democracy, but she has since become an international pariah. Two years ago, Parliament unanimously stripped her of her honorary Canadian citizenship.

There is good reason to be skeptical about just how the case against Myanmar and its generals will sort itself out. It’s unlikely that the UN Security Council will be of much use, no matter how the case eventually concludes at the ICJ, which adjudicates between states. And only two Security Council members, the United Kingdom and France, are signatories to the UN statute establishing the International Criminal Court, which was set up 22 years ago to prosecute genocidaires and war criminals. 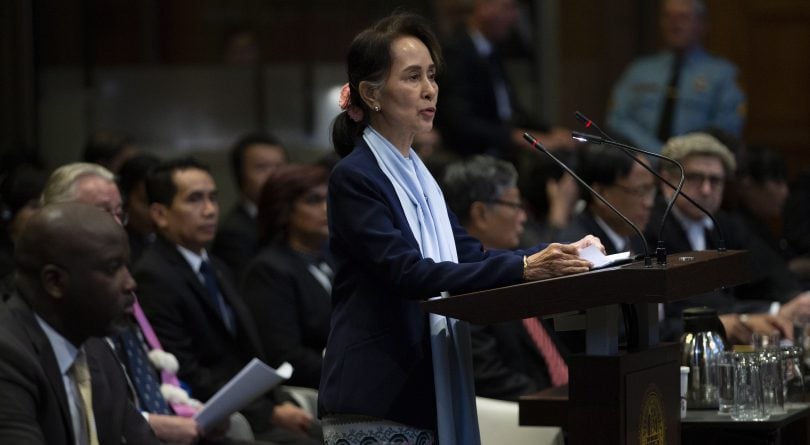 While several countries—notably the United States, the European Union members and Canada—have imposed arms embargoes on Myanmar and sanctions on Myanmar’s military leadership, the UN itself has instituted no sanctions, despite the urging of the UN’s Special Rapporteur on human rights in Myanmar. The week before the ICJ’s ruling against Myanmar, Chinese president Xi Jinping signed more than 30 agreements with the Myanmar government. China is second only to Singapore as the largest foreign direct investor in Myanmar. Russia, meanwhile, has agreed to sell Myanmar Sukhoi Su-30 fighter jets.

The UN’s history in upholding its solemn “never again” vow—enshrined at a time when the world was reeling from the horrors of Auschwitz, Sobibor, Treblinka, Belzec and all the other death camps of Europe—has become a cliché of broken promises. Russia and Iran continue to pulverize Syria, which has racked up three times the death toll of the Hiroshima nuclear bomb blast over the past nine years, and disgorged six million refugees. And China continues its relentless persecution of its religious minorities, including the Muslims of Xinjiang, where more than a million Uighurs have been interned without trial in  forced labour and re-education camps.

But the ICJ’s decision last week was an anomaly. “I think this might be a turning point,” Akhavan said. At the very least, it may be a reprieve from nearly a quarter-century’s worth of abdications from the international duty to hold genocidaires and war criminals to account for their atrocities.

RELATED: In Myanmar, Aung San Suu Kyi has failed. But then, so have we.

It took the ICC 14 years to secure its first conviction. Thomas Lubanga Dyilo, a bloodthirsty warlord from the Democratic Republic of the Congo, was found guilty in 2012 on charges that include massacres, torture, mass rape and the forcible conscription of child soldiers. Most notoriously, Sudanese president Omar al-Bashir, wanted on ICC charges related to the genocide in Darfur, remained at large for 10 years. Last April, a pro-democracy uprising in Sudan led to his arrest by Sudanese revolutionaries.

Payam Akhavan has spent most of his 30-year legal career chasing down mass murderers and war criminals. His own family, from Iran’s persecuted Baha’i minority, fled to Canada when he was a child. He’s served in criminal tribunals and commissions on the former Yugoslavia and Rwanda, Guatemala, Cambodia and East Timor. He’s acting for Gambia in the case against Myanmar at the ICJ, and he’s representing Bangladesh in the action against Myanmar at the ICC, and Akhavan reckons that last week’s ICJ order may mean the tide really is turning. “I’m kind of happy about it. It’s one of those rare times in an otherwise bleak business. I think this is a turning point.”

Just the pursuit of the case against Myanmar has already made a difference. There have been skirmishes and civilian deaths in Rakhine, as recently as this past weekend. But Myanmar is under a microscope now, and there have been no mass atrocities committed against the Rohingya since last November. “The measure of success is what does not happen,” Akhavan said. “The measure of success will be whether the 600,000 Rohingya remaining in Myanmar do not meet a similar fate as the thousands who were killed and raped, and otherwise those who fled to Bangladesh. That’s the immediate priority.

“It remains to be seen how things will unfold on the ground. But at the very least we have to ask ourselves, what have we got to lose by trying?” 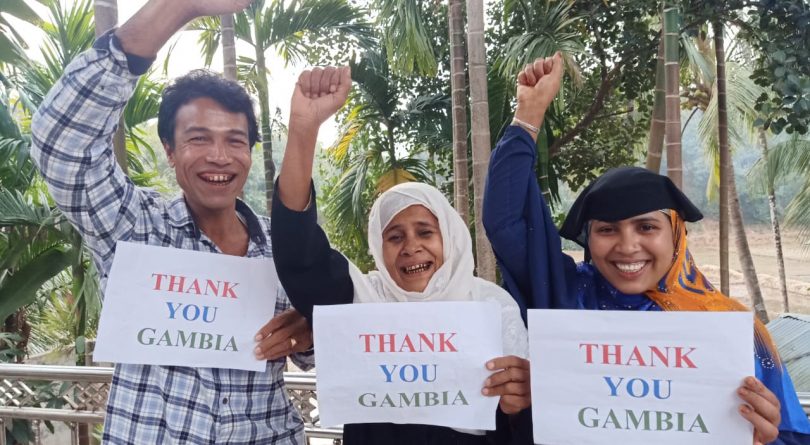 Yousuf, Hamida, and Hasina on Jan. 23, the day of the judgment, in Kutupalong refugee camp in Bangladesh (Legal Action Worldwide)

There is also something harder to define about last week’s victory. It involves not only justice being done, but seeing justice done. Attending the proceedings at The Hague were three Rohingya refugee leaders—Hamida Khatun, Hasina Begum, and Yousuf Ali. They were there, in the magnificent Peace Palace as Myanmar’s Aung San Suu Kyi was called to account and publicly humiliated. None of the three had ever even been on an airplane before, but they were there in The Hague, 71 years and a day after the world had promised “never again,” watching justice being served. And they left with hope that justice will be fully done, one day.

“You know, I’m an academic, and we teach our students about different theories of justice and natural law and positive law and all that, Akhavan said. “But until you sit in a court and you see someone who has lost everything, and see their transformation as they see justice in action, you don’t understand what justice means.”