In the U.S.-Canada trade war, we are not blameless

Opinion: The Trudeau government has failed to adjust to Washington’s evolving political landscape—and Canada's provocations have not helped matters 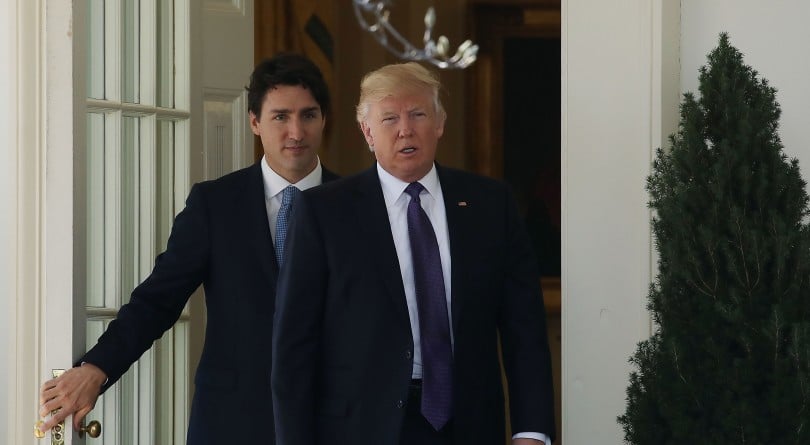 A great deal of economic patriotism has come to the fore amid the theatrics of a trade war between Canada and the United States. After U.S. President Donald Trump announced tariffs on Canadian steel and aluminum, Prime Minister Justin Trudeau promised to retaliate with $16.6-billion worth of retaliatory tariffs on U.S. products, prompting Canadians to largely celebrate the tough talk. Some have even championed buy-Canadian campaigns and cancelled plans to travel south.

But the coming into force of the Trudeau government’s tariffs against the U.S. marks a major setback in the NAFTA negotiations in particular and the Canada-U.S. economic relationship more generally. A full-blown trade war now seems increasingly possible. Tariffs will beget more tariffs. The costs will be disproportionately borne by Canadian businesses and workers.

Was this outcome inevitable when negotiations started nearly one year ago? Maybe. Trump’s mercurial leadership and erratic deal-making style was always going to be a complicating factor. Any Canadian government would have invariably encountered challenges negotiating with this administration.

But this doesn’t mean that Ottawa is off the hook. It’s too simplistic to merely blame the U.S. administration for the current tensions, and the asymmetry of negotiating power in our relationship leaves Canada far less room for mistakes. A key measure of any Canadian government is how it manages the Canada-U.S. relationship, irrespective of whether we agree with or even like the occupant of the White House. In fact, Trudeau said as much in a high-profile speech on Canada-U.S. relations prior to the 2015 election. “Prime Ministers and governments are commonly and rightly judged by how they foster that relationship for the greater common good,” he said at the time.

So how does this government measure up to this standard? An impending trade war certainly isn’t a good sign.

The truth is that Ottawa has made a series of miscalculations and errors that have provoked the Trump administration and exacerbated bilateral tensions while doing nothing to advance Canada’s interests. These actions and choices have only served to make a difficult situation worse. The NAFTA negotiations—and in turn, Canada’s economy—have been put at risk in the process.

Take the NAFTA renegotiations, for instance. We didn’t want these negotiations, since we were content with the status quo. Nevertheless, our negotiating position led with calls to make the deal “more progressive” and to insert a raft of ideological causes completely at odds with Trump’s priorities. This was both a distraction and needlessly provocative.

Ditto for the agenda the prime minister struck for the G7 summit in Charlevoix, Que., which focused on issues like gender and the environment, knowing this would annoy and isolate the president, while leaving off the table other challenging issues of big interest to Washington. The spat about the post-summit press conference was mostly a coded exchange about these conflicting priorities.

Then there’s China. Much of Trump’s international trade agenda is driven by anger about Chinese misbehaviour in trade and national security issues. Yet not only has Ottawa energetically pursued free trade with China, it’s also been reluctant to take seriously the national security threats that country increasingly represents to the west. Ottawa only blocked the recent acquisition of a large Canadian construction firm after it was pressured into a full national security review, and it has allowed other such transactions despite clear national security implications that concern Washington policymakers. And Canada continues to be quite sanguine about Chinese firm Huawei’s deep involvement in the development of our wireless infrastructure at a time when virtually every U.S. intelligence agency has warned about the grave risks the company poses to national security.

On national defence, inextricably linked in President Trump’s mind with international trade issues, we’ve also misplayed our hand instead of searching for ways to partner with the Americans.  The prime minister is visiting Canada’s troops in Latvia in advance of the NATO Summit to signal Canada’s commitment and reliability as an ally. But this welcome show of support glosses over the fact that our reluctant leadership of the mission came only after strong American pressure, and our military contingent remains quite small compared to other countries with similar responsibilities.

Washington couldn’t care less about peacekeeping missions to Africa, but it would welcome Canada undertaking real freedom of navigation missions to push back against Chinese efforts to claim and militarize the South China Sea. Given that the Americans disinvited the Chinese from the RIMPAC naval exercises this spring, this was an ill-advised moment for a Canadian warship to engage in military exercises alongside the Chinese navy. The prime minister has also set his face against participation in the American-led ballistic missile defence system, even though such participation would allow us to offer a concrete gesture in favour of improving U.S. national and continental defence at a relatively modest cost.

Let’s not overlook the occasional needless rhetorical provocation, either. The most significant was Global Affairs minister Chrystia Freeland’s recent Washington speech, a self-evident shot at the president that was understood by the White House as such. Not mentioning Trump by name did nothing to lessen the blow.

No, Trudeau wouldn’t have voted for Donald Trump—but he is president of the United States all the same. That placed the onus squarely on Ottawa to rethink its priorities originally conceived for continuity between the Obama administration and an anticipated Clinton one. Indeed, in his 2015 speech, Trudeau criticized his predecessor for failing, as he put it, to “focus relentlessly, for the long-term, on making progress in those areas” where Canada-U.S. interests align.

Yet, as we recently wrote, Ottawa has signally failed to understand the extent to which Trump is breaking with conventional thinking and charting a different course on climate change, energy development, foreign policy, and trade.

This failure to recognize fully Washington’s evolving political landscape and to adjust accordingly is a costly and regrettable mistake. Canadians may not like Trump, but that’s irrelevant. We have to work with him for the next two years—if not possibly six.

Fortunately, we can fix it. One of Trudeau’s key conclusions in his 2015 speech on improving the Canada-U.S. relationship was a “willingness to admit mistakes.” It’s good advice. He should take it.