After Brad Wall, can the Saskatchewan Party keep itself together?

Opinion: The Sask Party and its next leader will have soul-searching to do—and that will include the work of retaining its broad bloc of voters 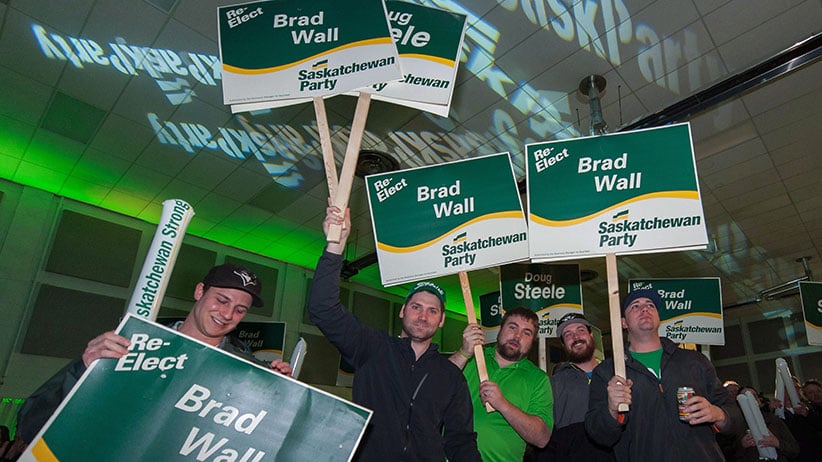 Even if you lived in Saskatchewan, you’d be forgiven for not knowing that six people were vying to take charge of a political party’s existential crisis.

The nomination deadline for the governing Saskatchewan Party to select the successor to longtime throne-holder Brad Wall—and by extension, the next premier of Saskatchewan, after his resignation announcement in August—has passed. Six candidates are vying to fill his shoes: former Saskatoon city councillor and justice minister Gordon Wyant; former Grant Devine staffer and, controversially, the current head of Saskatchewan’s civil service, Alanna Koch; a trio of former cabinet ministers in rural MLA Scott Moe, Regina MLA Tina Beaudry-Mellor, and Saskatoon MLA Ken Cheveldayoff; and former Conservative Party MP Rob Clarke. The winner will be decided by party members on Jan. 27, 2018.

But as the province prepares for a seismic shift at the helm of its ship, positivity and hope can feel like they’re in short supply on Saskatchewan’s political landscape, as residents have borne witness to the sideshow—at times feeling like a race to the bottom—that has become the Sask Party’s leadership campaign.

Perhaps it’s only fair to cut the party some slack; it has only held two contested leadership races in as many decades. In 1998—one year after the party was founded by a coalition of four Progressive Conservatives and four Liberals from those respective provincial parties—Elwin Hermanson became the party’s first full-time leader by just a few hundred ballots in a race that saw only 3,344 members cast their votes. After a devastating and unexpected second-place finish for Hermanson and the Sask Party in the 2003 Saskatchewan general election, Brad Wall was acclaimed as leader in 2004, a commanding presence who has been premier since 2007.

Four party insiders told Maclean’s that today’s Sask Party membership is as high as 15,000, not including new memberships sold throughout the campaign. That exponential increase in Sask Party memberships, however, doesn’t appear to equate to a wave of modern-day support for any one of these six candidates. No clear frontrunner has emerged; prior to Clarke’s late entrance into the race, internal polls conducted by individual campaigns revealed a cluster of four candidates jostling neck-and-neck, with Beaudry-Mellor a distant fifth.

And whoever wins, their primary job will be a tricky one: Keep the Saskatchewan Party’s founding coalition of the centre-left and centre-right from collapsing.

“Even though Brad Wall’s influence and ideas will undoubtedly and deservedly continue to carry considerable influence over the Sask Party and province of Saskatchewan, will the next leader of this coalition party, and the next premier of Saskatchewan, reassure and retain many liberally minded members, or will the new leader simply reinforce the party’s conservative character?” reflected former Sask Party government MLA and cabinet minister Rob Norris. “Essentially, the answer to this question will influence greatly the fate and future of the Saskatchewan Party, and in fact will likely frame the 2020 general election.”

That will be a tall task, if the early race is any indication. Socially conservative hot-button issues like timely and equal access to abortion have emerged as wedges in the campaign. Centrist candidates such as Beaudry-Mellor and Wyant were immediately polarized away from the likes of Cheveldayoff, a card-carrying federal Conservative who has recently recruited members of Alberta’s United Conservative leader Jason Kenney’s campaign team, and who is now struggling to reconcile his promise that he can secure urban votes with his recent comments condemning reproductive choice, even for victims of rape. And Saskatchewan conservatives and liberals alike have reacted negatively to the Sask Party’s much-maligned 2017 budget, the threat of both a ballooning debt and deficit, the air of entitlement that has permeated its third-term government, and even the departure of Wall’s powerful, emotionally connected brand. While the Sask Party has largely retained its core support, even if grudgingly in part in rural Saskatchewan, recent polls and by-election results have shown it has hemorrhaged in the key urban centres—and the more liberal hubs—of Regina and Saskatoon.

This is in addition to the fact that the leadership of the Saskatchewan Party has become a slightly poisoned chalice since its golden years under Wall. The Manitoba Crown Prosecutor’s office is currently deliberating the RCMP’s investigation of land deals connected to the Saskatchewan government and disgraced former Sask Party minister Bill Boyd, determining whether to lay charges. The next premier will be weighed down by a perception of overspending, mismanagement and an elaborate, multibillion-dollar bypass twirling across the prairie east of Regina, partly unable to accommodate the large farm machinery integral to the region’s economy.

The problem for the SaskParty is that while conservatives have nowhere to go, the liberal-centre voters can either swing back to the Saskatchewan NDP—a risk that will be easier to identify after they elect their own leader in March—or stay home. We’ve seen evidence of both behaviours in polling and in two recent urban-seat by-elections where the NDP defeated the Sask Party, which—coupled with a side eye at Alberta’s shocking swing vote to the NDP in 2015—strikes fear into the hearts of party strategists.

The winner will have to lead and reunify a deeply split party that doesn’t seem to want to even acknowledge the divide, never mind rectify it. Wyant, for example, is largely seen as the candidate who would sweep the urban membership as well as be a solid down-ballot choice for members supporting other, more rivalrous candidates. He has set himself apart by acknowledging the party’s shortfalls, including its insularity, as well as the steps it must take to address its scandals to redeem itself with the general public. Others, like reported rural frontrunner Koch, have vigorously defended the status quo, stubbornly insisting everything is fine, earning her the support of the party’s predominantly conservative, male, establishment base.

The question that remains to be answered is if the new leader, whether they campaigned on it or not, has the courage to take the soul-searching steps the party desperately needs in order to begin to address the issues that stands between it and the provincial vote two years from now. Specifically: What does the party, without Brad Wall, stand for? After all, while Brad Wall’s Sask Party redefined Saskatchewan’s stagnant politics, it has arguably done little to define itself beyond Wall’s own strong and, until recently, extraordinarily popular brand. In allowing itself to get comfortable in its leader’s shadow, the party has stunted its own maturity, and is struggling to catch up to where a 20-year-old organization should be with respect to foundational principles and identity. And so far, even the candidates who have indicated a willingness to disrupt the status quo have shied away from any strongly worded statements indicating they would ask those tough questions.

While the outcome of the leadership campaign will likely be unclear right until its final hours, the new Saskatchewan Party leader and premier must look forward and bring increased political certainty, and therefore increased ideological clarity, to the party and the province as a whole. But to improve its odds of winning in 2020, they must also—perhaps ironically—hold tight to its own past: the coalition that got them to government in the first place.