Amid tragedy, we often find hope in our faith in civil society. That has to stop.

Opinion: It's dangerous to think that love or civil debate are the ways forward against virulent hatred—especially as hate continues to kill, as it did in Pittsburgh 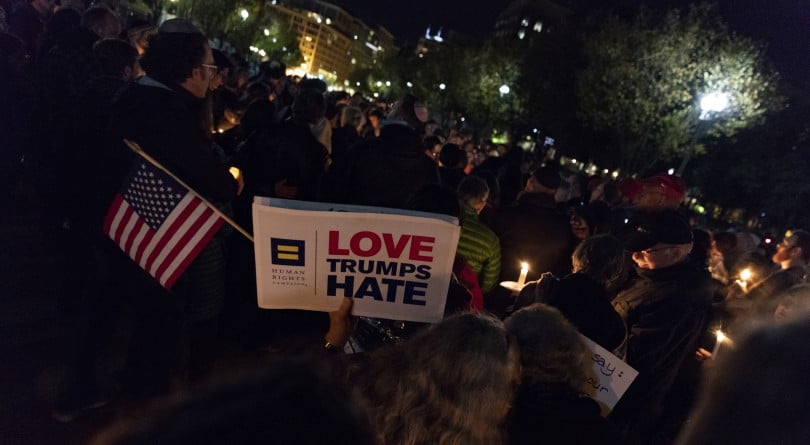 A vigil participant holds a 'Love Trumps Hate' sign during a Havdalah vigil for the victims of the Tree of Life Congregation shooting in front of the White House on October 27, 2018 in Washington, D.C. (Alex Edelman/Getty Images)

A couple of weeks ago, my partner and I dedicated our daughters to God, before an assembly of friends, family, and congregants. The ceremony was conducted by a well-known pastor, within the walls of a historically Black church—one of many founded by formerly enslaved people who escaped from America to freedom. Our daughters are twins, barely six months old, whose bright eyes and easy laughs conspire to stop me from getting any work done. As their names were lifted in prayer requesting the Lord’s blessings and protection, my mind flitted, as it often does, to the distinct possibility that my children’s Black skin could put them in harm’s way.

Now, my thoughts are with the congregation that encircled them in God’s light. I am not naming the church, which welcomed my family into God’s house regardless of the fact that we are not members of their church, or even their denomination. That’s because, over the past few years, the houses of worship in which nonwhite people gather have increasingly become the targets of white-supremacist extremists, those roaring lions, walking about and seeking whom they may devour.

My thoughts are with the family who were in synagogue that morning for what was supposed to be a joyful baby-naming ceremony at Pittsburgh’s Tree of Life synagogue, but wound up instead subjected to what is possibly the worst act of anti-Semitic violence in America’s history. My thoughts are with the members of all ages, who crossed the synagogue threshold on Saturday morning to continue devoting themselves to their communities and their faith, and were plunged into a nightmare. My thoughts are also occupied by a person, twisted and radicalized both by online message boards and the inflammatory language by the President of the United States, who stormed into a place of worship armed with an assault rifle and a heart full of hatred, and opened fire.

Ultimately, however, my thoughts are meaningless. So are yours. As are all of the ways that we—the well-intentioned and the bad-faith actors alike—respond after the now-quotidian outbreaks of hate-fuelled violence.

It is a comforting, paralyzing lie to believe that we have ever lived in a time when cerebral efforts, or words of sympathy uttered to the Almighty, could be enough for what we face, enough even to dam the flood of racialized violence that has been unleashed in the wake of a white supremacist becoming the most powerful man in the world. And yet, in the wake of this tragedy, we recite platitudes to support that fiction, while doing little more than exposing vulnerable people to more violence, and more hatred.

That we ought to meet hate with love, for example, has become stripped of Dr. King’s original context, as well as the context in which the synagogue’s rabbi Jeffrey Myers spoke the words. It’s been twisted to fetishize acts of empathy toward radicalized white nationalists, and to chide us with the belief that we, the survivors of white-supremacist violence, must stow our grief to bring these violent extremists back into polite society with kindness and understanding. Another suggestion is to debate their ideas: draw them out into the public forum, weigh their beliefs against those of a tolerant and polite society, and allow reasonable people to make up their own minds.

Behind these prescriptions, draped in the vestments of logic and civility, is the belief that when historically oppressed peoples are once again subject to the violence of white anger, the only workable solution is for us to offer our time, energy, happiness, and our bodies as sacrifices until that anger is sated.

So polite society locks itself in endless civil and judicial debates over whether publishing hate speech should indeed be a prosecutable offence, even as the young white men radicalized by the toxic and hate-fuelled atmosphere of white supremacist message boards continue to murder us in our houses of worship. And under the valorous but abstract guise of debate, polite society promotes the agendas of known hate-mongers like Steve Bannon—a man whose ex-wife, under oath, said that he had reservations about his children attending a school because it had too many Jewish students—even as the congregation at the Tree of Life synagogue make plans to bury their dead.

A well-known epistle from Saint James offers that faith without works is dead—that if a brother or sister is naked and starving, and all the faithful will offer are words of comfort unaccompanied by food and clothing, the gesture is empty. As the violence and bloodshed escalated over the past week, including the shooting at the Tree of Life synagogue, an attempted shooting by an alleged white supremacist at a Black church in Jeffersontown, Ky. that culminated instead in the killing of two Black patrons of a grocery store, and a spree of attempted bombings of Donald Trump’s highest-profile critics allegedly perpetrated by a fanatic supporter, we’ve been subject to or asked to take comfort in endless, empty words.

Comfort in the faithful and baseless idea that polite society will prevail.

I don’t know how we are expected to live like this. For those of us who are increasingly being stripped of our humanity, both legislatively and rhetorically, and starved for justice and solidarity in these appalling times, faith in our democracy is not enough. Without the necessary works of our peers to protect the marginalized from the growing movement of white supremacists, that faith must die.

Because far too often, we’re the ones dying, instead.