The Tories insist racists aren't welcome in their party. What are they doing about it?

Terry Glavin: Andrew Scheer's Conservatives have a racist jackass problem and they're not doing enough to shake it. 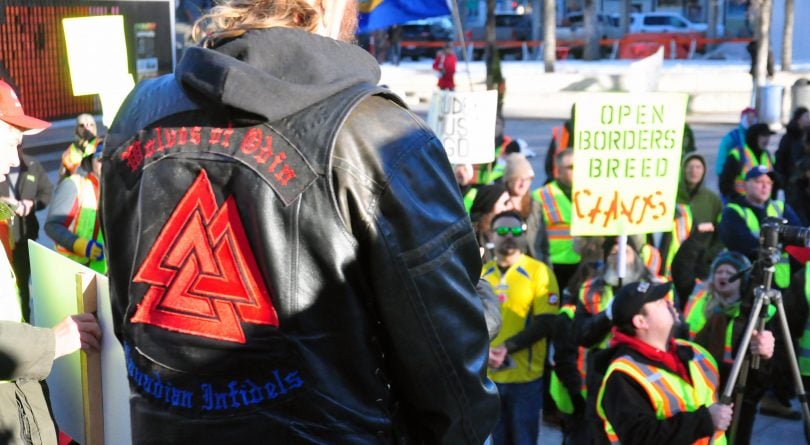 The Conservatives denounce xenophobia, but they haven’t done much to purge it from the party (Omar Mosleh/StarMetro Edmonton)

There’s no way around it: Andrew Scheer’s Conservatives have a racist jackass problem.

This is not to say that Scheer or any of his MPs have consciously invited the affections of the country’s racist jackasses, and there are far fewer votes in Canada’s racist jackass constituency than you might think. But it’s a problem. And Andrew Scheer’s Conservatives have it, in spades.

The most recent evidence is quite jarring. It comes in Ekos Research Associates’ latest annual findings about Canadian attitudes about immigration. Nothing much has changed in the long-term trends, but for the first time, the proportion of Canadians who say immigration rates are too high has merged with the percentage of Ekos poll respondents who say too many non-white people are coming to Canada. And that bloc is coalescing, for the first time, behind a single political party: Scheer’s Conservatives.

READ: Andrew Scheer has a problem

This is what it has come to. Sixty-nine per cent of the “too many non-whites” respondents say they back Scheer’s Conservatives. It only stands to reason that a fairly high number of these people are racist jackasses. And there’s growing evidence that sociopaths from that creepy white-nationalist subculture that congregates in obscure 4chan and 8chan chatrooms are hoping to mainstream their contagion into conservative parties. Scheer’s Conservatives insist they’re not happy about any of this. 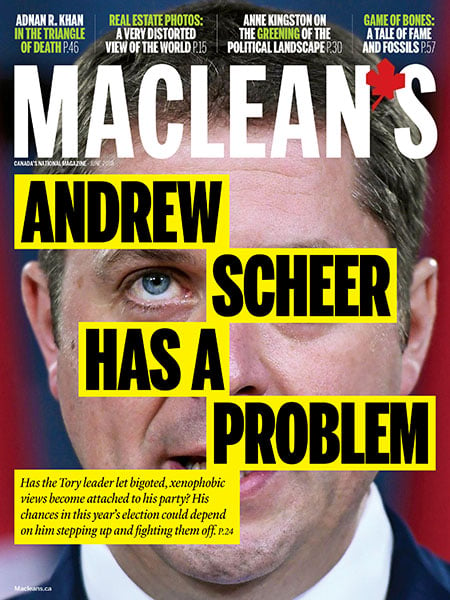 “Mr. Scheer is clear. These types of views are not welcome in the party,” Brock Harrison, Scheer’s communications director, told me. “He’s stated that view many, many times. Sure, there are fringe elements who will tell a pollster they support the Conservative party, but, you know, those fringe elements who hold to these extreme ideologies have no place in the party. That’s clear.”

It’s not hard to make the case, for instance, that Justin Trudeau’s Liberals have disingenuously attributed racism and xenophobia to public anxieties and otherwise reasonable Opposition criticisms of the way Ottawa has handled the upsurge in “irregular” asylum claimants who have crossed the Canada-U.S. border since 2017. “This kind of rhetoric drives these people [racist jackasses] to us, whether we like it or not,” Harrison said. “The denunciations from Mr. Scheer are clear. Every time something flares up and the Liberals try to pin this on us, we stand firm and we denounce.”

READ: How should Andrew Scheer talk to Canadians?

But the issue flared up into a bonfire of the Conservatives’ own making last summer, when Maxime Bernier, Scheer’s primary challenger in the 2017 Conservative leadership race, got turfed from Scheer’s shadow cabinet for a series of weird anti-multiculturalism outbursts that put him in the crosshairs of the Conservatives’ capable immigration critic, Michelle Rempel. In a huff, Bernier founded his own rump political party, of the type that sometimes seems to specialize in anti-immigrant jackassery. It was a golden opportunity for Scheer to purge the party of its jackass wing and invite them to run off with Bernier. It was an opportunity Scheer didn’t take.

During the 2017 leadership race itself, the House of Commons was in an uproar over Liberal MP Iqra Khalid’s arguably outlandish motion to mount a national effort in the struggle against Islamophobia. But back then, the Conservative Opposition’s reasonable objections to Liberal hyperventilation were overshadowed by bizarre and paranoid alarums within the Conservative party itself. Several leadership candidates proved more than happy to cross deep into the territory of an Islamophobia they said didn’t even exist.

There was little separating Stephen Harper’s Conservatives from the Liberals and New Democrats on the issue of opening the door to Syrian refugees by the time voters walked into polling booths and turfed the Conservatives in the 2015 federal election. Even so, there was a bad smell about the party, coming from the fringes, and the occasional burst of air freshener out of Scheer hasn’t done the trick.

We’re only months away from another federal election, and with a spotty record to run on, Trudeau has given every indication that the question he wants on voters’ minds will be the same as it was last time around: what’s that smell?

Canada is changing dramatically. A lot of people don’t like what they see, and among them are voters who are predisposed to simple explanations and conspiracy theories. The rural white males drawn to white-nationalist propaganda are perched precariously on the bottom rung of every ladder the Liberal free-trade vision imagines, with its phasing-out of the oil patch and its preoccupation with gender equity, “political correctness” and the concerns of visible-minority communities.

While the Liberals deserve credit for attempting to craft policy that addresses the strains and stresses of globalization and migration, Team Trudeau has invested its political fortunes in a “liberal world order” that is broken. The losers in the shiny, happy world of the Liberal imagination are too easily written off by Liberal strategists. The New Democrats have lost their hold on voters from the old working class. The Tories have picked them up.

The promise of relatively open borders, the free flow of capital, people and ideas among and between liberal democracies and police states like China and gangster states like Russia and theocracies like Iran—all of this was already losing its sheen when Trudeau won his majority four years ago.

The urban millennials who carried Trudeau into office were already alert to the dismal prospect of a future planet convulsing in catastrophic climate change. Now they’re stuck in low-paying temporary jobs, and they’re dealing with out-of-reach housing, high daycare and transportation costs and university degrees that lead nowhere. Holding out higher immigration rates as some sort of magic road map out of this mess is at best a flimsy political strategy. It’s not convincing, for starters. But more importantly, it’s dangerous, because when the formula fails to fix things, it will be immigrants who take the blame, and Canada’s recent immigrants are overwhelmingly people of colour.

READ: Why race and immigration are a gathering storm in Canadian politics

It’s not good enough for Scheer to get better at dealing with the occasional flare-ups that leave him looking like the hillbilly caricature Liberals like to make of him. He needs to openly admit that the Conservatives have a problem. He needs to clearly and emphatically demonstrate that he means what he says, that his party is not open to voters who scapegoat immigrants and hold fast to the view that there are too many non-white people coming to Canada. He needs to do something about it.

He needs to show them the door and invite them to leave. Whatever numbers he’ll lose to Mad Max Bernier, he’ll pick up from more centrist voters who’ve grown weary of Trudeau’s “woke” politics, with its wardrobe of groovy socks and a photo album filled with glamour magazine spreads where a portfolio of policy accomplishments should be.

But whatever the faults that can be laid at the feet of the Liberals, it’s Andrew Scheer’s Conservatives who have the racist jackass problem. And however much they genuinely don’t want it, they’re clearly not trying hard enough to shake it.

This article appears in print in the June 2019 issue of Maclean’s magazine with the headline, “Not wanted on the voyage.” Subscribe to the monthly print magazine here.