Stephen Maher: The Tory leader has to convince caucus that he knows what went wrong and can fix it. They'd be wise to be suspicious of the explanations offered. 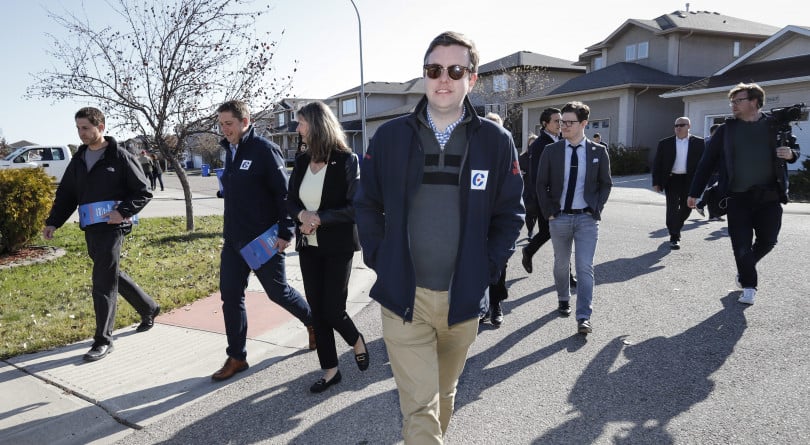 Marshall (centre) campaigns with Scheer (second from left) in Regina on Oct. 21, 2019 (THE CANADIAN PRESS/Jeff McIntosh)

Nov. 5, 2019: This story has been updated with a comment from Conservative campaign manager Hamish Marshall

When Conservative MPs gather in Ottawa on Wednesday for the first meeting since the election that dashed their hopes, they are expecting a report from Andrew Scheer and campaign manager Hamish Marshall on what went wrong.

If Scheer and Marshall are honest and forthcoming in that report, it will be difficult for them to convince Conservative MPs that they should stay in their roles, although that, apparently, is the plan.

History will likely record that Scheer only got the shot at power he had because A-list candidates assumed there was no chance of winning against Justin Trudeau in 2019. Then, after the SNC Lavalin affair and blackface put victory in sight, Team Scheer was not good enough to put the puck in what Peter MacKay accurately described as an empty net.

There is a good argument to be made that the Tories should give Scheer another shot. Leaders often improve with experience. Who doesn’t think that the NDP would have done better with Tom Mulcair than Jagmeet Singh in this election?

But it is striking that nobody who isn’t getting paid by Scheer is making that argument. As Martin Luther King said, “In the end, we will remember not the words of our enemies, but the silence of our friends.”

READ MORE: A 338Canada analysis: Where the Conservatives lost

Scheer’s friends are conspicuously silent, and it seems unlikely that he can survive a leadership review vote in April, which means the Conservatives may be in for a backstabbing season like that of 1983, when MP Elmer MacKay, Peter’s father, memorably described Joe Clark, his leader, as “the dogfood that won’t sell.”

That struggle ended when Clark faced a leadership review vote, which he lost with 66.9 per cent of the vote. He went on to lose the following leadership race to MacKay’s friend, Brian Mulroney.

To avoid a drawn-out period of knife fighting with Mulroneys and MacKays, which would distract the party from its important parliamentary business, Scheer should likely resign. If he won’t do that, the caucus should likely dump him.

MPs have a mechanism for doing that, thanks to Michael Chong’s Reform Act, but insiders don’t think they are ruthless or well enough organized to act decisively.

They will likely settle for the heads of Scheer’s aides, but Scheer is said to be determined to keep Marshall, chief of staff Marc-André Leclerc, principal secretary Kenzie Potter and communications director Brock Harrison,

perhaps because if he is to have a fighting chance at winning a vote in April, he needs people he can trust organizing for him.

His job at caucus, then, is to convince his MPs that he has figured out where the campaign went wrong and is prepared to make the necessary fixes.

MPs would be wise to be suspicious of the explanations they are offered.

It is a truism in politics that political parties always have better polls than those available to the public. That does not seem to have been true for the Conservatives in this election.

On election day, the campaign was telling people that the party was going to win more seats than the Liberals and might be able to pull off a majority.

Marshall was responsible for polling. Reliable sources say he was convinced the party was ahead until the results started coming in. He has pointed to a late-election enthusiasm gap as the explanation but well-informed Conservatives are skeptical.

Marshall disputes the allegation that he believed that the party was bound for a victory on election day. “I knew that we were losing in Ontario before the results came in,” he said in an email. “We could see that Liberal turnout was higher than expected in key seats across the GTA. Our internal polling was in line with the public polls and we came out of field before the last weekend. Public polls like Angus Reid show that as much as a third of voters decided in the last three days, and those late deciders broke Liberal, especially in Ontario.”

But only bad polling would seem to explain the counterproductive messaging in the last week of the campaign, when Scheer decided to say that “only a Conservative majority government can prevent a government with Justin Trudeau as the spokesman but the NDP calling the shots.”

There followed several days of talk about whether Scheer would have the right to form a government if he won more seats than Trudeau, all calculated, apparently, to soften the ground for a post-election struggle for legitimacy that was, as it turns out, not in the cards.

If Scheer had spent the last week of the campaign talking just about anything else—tax credits for volunteer firefighters!—it would have been better for him, because his message was foolishly giving credence to the traditional Liberal end-of-campaign pitch at NDP and Green voters who can be stampeded to the Liberals out of fear of a Conservative majority.

The party’s Voter-ID and get-out-the-vote efforts, once miles ahead of the competition, were as bad as its polling, according to insiders granted anonymity because they are not authorized to speak publicly about the campaign’s failings.

In that last week of the election, as veteran Conservative campaigners spread out across the country to help their friends in tight races, many were surprised at the paucity of data. The party had decided to spend less money on phone banking than it had in previous elections, reasoning that the old approach was producing diminishing returns, since fewer people have landlines and fewer still answer calls from political parties.

As a result, riding-level campaigns had fewer identified votes to pull on election day than in previous elections. Central campaign officials are likely right that the party needed to spend less money on phone banking, but it is not clear that they figured out what to do instead, at least compared with the Liberals, who somehow managed to find their voters and get them to the polls.

To make matters worse for the Conservatives, the campaign was guided by overly optimistic polls, so they sent extra volunteers to ridings where they were not in contention—like Vaughan-Woodbridge, and Kings-Hants—instead of ridings they ended up losing by a few hundred votes — like Richmond Hill and Cumberland-Colchester.

If they had allocated their resources differently, former MPs Costas Menegakis and Scott Armstrong might have won.

The Conservative climate-change plan impressed nobody who wasn’t working for the petroleum industry, and whenever possible Scheer changed the subject, often to the desirability of more pipelines. The campaign obviously saw the environmental debate as a matter of damage control, which might be a reasonable political calculation if you think voters care more about their pocketbooks than emissions.

That doesn’t explain why, though, on the day that half a million Montrealers marched with Greta Thunberg, Scheer flew across the country to Vancouver to advocate for highway widening, providing a helpful contrast for any voter unclear about his priorities.

Social issues were even more difficult, particularly in the TVA debate in Quebec, where Scheer struggled to explain his view on abortion, overnight shedding support the party had worked for years to cultivate and giving new life to the Bloc Quebecois.

Scheer could have quietly attended the Lethbridge Pride parade in June, flipped a few burgers and then brushed off question about same-sex marriage ever after.

But he could not, would not flip burgers at a Pride event, likely because he would feel like he was hypocritically sanctioning activity that he considers sinful, or because he can’t afford to alienate the socially conservative supporters who made him leader.

Whatever his motivation on this, if Scheer will not bend, an increasing number of Conservatives feel, then the party needs a different leader. It is hard to fault their logic.

Finally, there is a question of ethics and accountability, which ought to have been a strong suit for a party running to replace the government that brought you the SNC-Lavalin affair.

But on the last day of the campaign, as volunteers were knocking on doors in the wrong ridings, and the campaign leadership was wrongly convinced they were going to win the most seats, in his last media availability of the campaign, Scheer was asked about a report that the party had hired former Liberal strategist Warren Kinsella to run a social media campaign against Maxime Bernier.

Scheer blandly declined to comment 23 times, which looked ridiculous and spoiled his chance at getting out a final message to voters.

The incident raises unpleasant questions, because Kinsella had created a social media firestorm by hinting an explosive story was coming about why Trudeau left a job as a teacher at a Vancouver private school. The Conservatives amplified that message with a news release asking about Trudeau’s departure from the school.

A fake-news operation in the United States posted several false stories, which were widely shared by Trudeau-despising conservatives who no doubt sincerely believed them to be true. After the French language debate, a journalist from Rebel News Network, where Marshall used to work, pressed Trudeau on the matter.

Canadian politicians should not have to deal with unfounded accusations of this variety as a condition of their work, and responsible politicians and political staff should take care to stay far away from the fever swamps of social media, where the unscrupulous peddle poisonous lies to the credulous.

It is hard to say with confidence that the Conservative campaign took that kind of care, which makes it difficult to feel bad for them as they deal with the fallout from all manner of errors.