Art during the time of coronavirus

Heather O'Neill: Throughout history, art was created during pandemics—to amuse, to console, and to give voice to those who were previously unheard 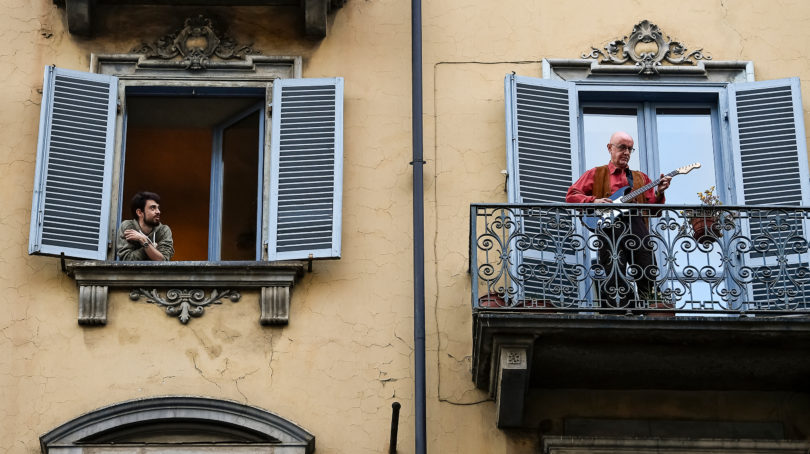 A man plays guitar from the balcony of his home as a man looks at him in the neighborhood San Salvario during a flash mob launched throughout Italy to bring people together during coronavirus. (Photo by Nicolò Campo/LightRocket/Getty Images)

This is the first of a series of essays from Canadian authors on the coronavirus and how it affects our everyday lives.

Heather O’Neill is an award winning writer based in Montreal. Her novels include Lullabies for Little Criminals and The Lonely Hearts Hotel.

Pandemics are notorious for upending all of society. Artists are notorious for creating their art under the most perilous and inopportune circumstances. They create in poverty, under repressive regimes, in prison, in the margins, after long late night shifts at a diner. When news of the pandemic began to take hold on the popular psyche and began changing our daily lives, I thought it might feel pointless to write anything given the gravity of the situation. But I am still writing every day, even more devotedly than before. Throughout history, art has continued to be created and consumed during times of plagues and global health crises. So art will be created now. Which begs the questions: What sort of art has been created during pandemics? And what purpose does art serve during them?

In Giovanni Boccaccio’s The Decameron, a group of women and three handsome men they chance upon, flee Florence in order to escape the Plague of 1348. They hole themselves up in a palace and each take turns telling a story at night. Boccaccio was the first to use a framing device, which is a narrative technique whereby a story is surrounded by a secondary story. The tales recited in the evening were witty, provocative, and seriously filthy.

They were not tales of the plague but of humanity in all its distracting joys. They used storytelling as a way to stay alive. It is similar to today. My daughter works at a bookstore and the day before it closed because of the pandemic, people rushed in to buy stacks of books. They wanted tales of loveliness, horror and courage. After its doors were shuttered, people began to purchase books online. My daughter leaves the stacks of books on a table in the vestibule and people enter the quarantined site all day to retrieve these necessary items.

MORE: Coronavirus in Canada: When freedom is a liability

Since self-isolation began, people all over the world have taken to putting up live streams on Instagram to communicate stories. They recite poems, cook vegetables, play music and entertain in any way they can. Because the need to hear stories is as strong as it is to tell them.

Each day of storytelling in The Decameron ends with a song performed by one of the characters. New secular musical forms emerged from the 14th century plague. Poet Guillaume de Machaut of France began setting his poems to music. And by 1365, the ballade had become one of the most popular secular forms.

During the plague, there were processions of wanderers loudly singing songs. Litanies—a chant that involves a supplication recited by the clergy, followed by a response from the congregation—became very popular. There was a call and response from the roving devotional procession to those in the street and the audiences at home. They created a sense of community in the social rupture caused by a pandemic.

Interestingly enough, back then in Milan, where risk of the contagion was high inside churches, the pious joined together in sacred songs from their open windows and doors. This exact phenomenon happened in Italy recently when quarantined citizens took to their balconies to play instruments and sing together. They played everything from accordions, tubas, violins, flutes, guitars and lots and lots of tambourines. And they are filled with infectious communal spirit while doing so.

Then there are those artists who have used the isolation of the plague to their advantage to delve into their own works. Shakespeare was notable in this respect.

When Shakespeare was a baby, a plague was ravaging the city, having already killed both his older siblings. It is speculated that Shakespeare’s exposure to the plague as an infant caused him to develop immunity. Who can say if this is true, but he survived four major plagues outbreaks that were severe enough to close theatres—1582, 1592, 1603 and 1607—during his lifetime.

Whenever there were plagues during the Renaissance, the theatres were shuttered en masse.

Shakespeare wrote in fits. He would not produce a play for several years and then go through a creative streak. In 1606, when he was 42 years old, he was in a fallow period, and it might have seemed to him that his best works were perhaps now behind him. But then when the plague closed down theatres, forcing him away from the wonderful mayhem of production, Shakespeare wrote King Lear, Antony and Cleopatra, and Macbeth.

These are masterworks of tragedy and introspection, which delve into the deepest realms of paranoid human solitude.

And what is the point of creating such twisted tales during dark times? Aristotle’s Poetics claims that by witnessing grieving, fear and pity in tragedy, we fear and grieve less when they happen in real life. Which explains why everyone is streaming Steven Soderbergh’s 2011 movie Contagion. I rewatched it last night and I have to say, I found it comforting.

The tragic figure of St. Sebastien, who was tied to a tree and pierced with arrows by the Romans, is considered to be the patron saint of plagues. During the plague years, paintings and altars of him were created all over Europe.

St. Sebastien, in addition to being the patron saint of the plague, is also the saint of homoerotic desire. There is a famous photograph by artist David Wojnarowicz, who was diagnosed HIV positive in 1987, where his mouth is sewn together with thick thread, attesting to the silencing he was facing, that puts me in mind of St. Sebastien.

Because the AIDS epidemic struck groups that were already marginalized, such as gay men and intravenous drug users, they faced—in addition to illness—the horror of blame, hatred and social isolation. Victims were further victimized by a society that refused to immediately disseminate information, medical funding into research and care for patients. As Wojnarowicz wrote in his memoir, “My rage is really about the fact that when I was told that I’d contracted this virus, it didn’t take me long to realize that I’d contracted a diseased society as well.”

Whereas the world wanted AIDS patients to disappear and be non-persons, artists like Wojnarowicz created portraits that made their tragedy magnificent. It rendered them visible. And thus art during this plague was a form of activism.

Wojnarowicz’s art has been repeatedly censored, as has Boccaccio’s Decameron. Art has always been a method of giving voice to the alienated and voiceless. Because they are articulating the experiences of the oppressed and disenfranchised, they do not articulate themselves in mainstream art forms. Thus the newness of their work causes it to be interpreted as shocking, discordant, lewd. Like Mary Shelley, the English novelist who wrote Frankenstein, artists stitch together body parts from the graves of the murdered and neglected, and reanimate them. They exist in the world, demand their space and to be called beautiful. David Wojnarowicz’s funeral was the first memorial during the AIDS epidemic that was a protest march.