Opinion: As the deadline to leave the EU looms, Theresa May faces a rebellion over her latest Brexit plan. Still, Britain carries on, into a breech of its own making 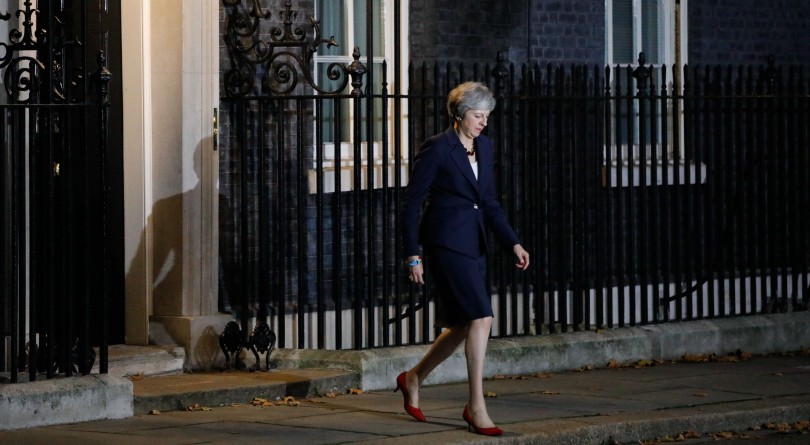 Britain's Prime Minister Theresa May comes out to give a statement outside 10 Downing Street in London on November 14, 2018, after holding a cabinet meeting where ministers were expected to either back the draft bexit deal or quit. - British Prime Minister Theresa May defended her anguished draft divorce deal with the European Union on Wednesday before rowdy lawmakers and a splintered cabinet that threatens to fall apart. (Photo by Tolga AKMEN / AFP) (Photo credit should read TOLGA AKMEN/AFP/Getty Images)

On Wednesday night, U.K. Prime Minister Theresa May announced that, following a fractious five-hour meeting with her cabinet and more than two years a referendum delivered a mandate for the United Kingdom to leave the European Union, her government had a draft agreement in place with Brussels on the terms by which the U.K. could achieve Brexit. Calling the agreement “the best deal that can be negotiated”—praise so faint it makes Little Nell look like Heidi—May admitted that there would be “difficult days ahead” as she attempts to win Parliament’s approval for the agreement.

Those difficult days, it turns out, came just one morning later. Two high-profile cabinet ministers—the secretary in charge of Brexit and the pro-Brexit secretary in change of work and pensions—resigned in protest of the nascent withdrawal agreement.  Two junior ministers and two parliamentary aides joined them.

It’s starting to feel as if the whole Brexit thing was effectively the work of a few hucksters who, looking for an angle, went around saying, “You know what would really do us good? If all the fountains of the great deep were broken up, and the windows of heaven were opened, and the rain was upon the earth 40 days and 40 nights.” And then, when 51.9 per cent of the 72.2 per cent of the people who made it out to vote on the torrential-rain question had said, “Sure, let us get those waters of the flood upon the earth—that’ll show the bigwigs in Brussels and all those elitists and ‘experts’ who keep saying that floods are bad, and people cannot breathe underwater,” no one in charge wanted to back down.

Suddenly, they all just had to see the “Great Deluge” thing through to the soggy end, although just about everyone knew it was a bad idea and that actually yes, people can’t breathe underwater, and no, destroying every living substance upon the face of the ground—both man, and cattle, and the creeping things, and the fowl of the heaven—wasn’t going to make £350 million in weekly National Health Service funding or sweetheart bilateral trade deals fall out of the sky.

This week, just about everyone who actively supported Operation Drown Our Nose To Spite Our Face began bowing out of actually running it, two by two, making their way to the nearest resignation ark as the water rises as if they never themselves called out, “Make it rain!”

Brexiteers won’t quietly disappear, of course. Nor will they ever admit that maybe dropping out of the EU on the assumption that this would somehow just undo the last couple centuries and make Britain a great power again, with all its former colonies lining up to provide it with new, more racist-friendly trade agreements, was a bad plan. They’ll just demand votes of non-confidence on Theresa May’s leadership, and decry the failure of everyone else to deliver on their promises.

For her part, May seems determined to die on Brexit Hill, rebuffing any suggestion that the British people be given another vote on the value of that hill now that they’ve had a chance to more fully reconnoiter that particularly unpleasant bit of terrain. Now, it seems likely she will die on that hill without ever actually saying whether or not she actually likes the hill, or explaining exactly why this particular knoll is worth so much as napping on.

“Look,” May seems to be saying, “I became prime minister of a country that had just collectively decided to trade all its cows for beans. These are the best beans I could possibly get.” But forget the fairytales and Bible stories: May’s mayhem this week is mostly another chapter in the Bleak-House-but-with-more-drama-and-more-lawyers lesson the U.K. has been offering the rest of the world, and that much of the world has largely ignored.

This is all a cautionary tale on the inherent danger of trying to implement slogan as policy. It’s one thing to promise to put “a chicken in every pot,” as a Republican flyer vowed to do if Americans voted for Herbert Hoover to be their depression-era president. But it’s quite another thing to hold a referendum on literally stuffing a chicken into every pot in the nation. You, like David Cameron promising a Brexit referendum before you, might think a referendum would shore up your support among the Chicken-Pot-eers in your party with little risk. After all, you might reassure yourself, given a check-the-box-choice, people surely would not really be stupid enough to vote to have every pot-like receptacle in their country forcibly filled with poultry?

The lesson here is a simple one: never underestimate people’s ability to select the most outlandish answer on any questionnaire.

Stop and consider where an imprudent plebiscite can lead. Picture yourself coming down the stairs in the morning, eager for a good cup of tea to start the day. You’re in the kitchen, but something’s wrong. Did that teapot just move? What’s that sound? You shake your head; you must be hearing things. This is why, you tell yourself, you shouldn’t stay up all night thinking of new ways to sell your self-respect for political gain. But there it is again! You try to ignore it, slamming the kettle on the stove and reaching for your teabags, but then it comes yet again, loud and clear: “Cluck cluck cluck,” cries the bird, bursting from your teapot.

You reel back, grabbing desperately for a saucepan to defend yourself from the outraged fowl—but you don’t realize until it’s too late. “Cocka-doodle-doo!” the rooster cries, as the lid of the saucepan flies off. You try to reason with it.  “This isn’t fair,” you say; “I don’t think you really count as a ‘chicken.’ ” But it’s no use: the U.K.’s Mass Chicken Insertion negotiators have to work with what they can get. And their mandate is clear: A chicken in every pot. No exceptions. No escape.

That is pretty much the world you live in now, Britain. Sorry about all your pots.