Opinion: As tense NAFTA negotiations continue, the Prime Minister foolishly backs one of America’s most destructive policies against his own and the national interest 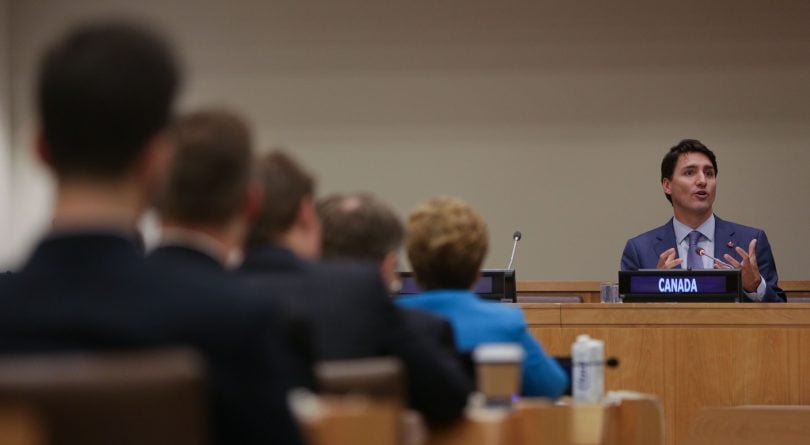 The American war on drugs—a Nixon-era initiative to tackle narcotics trafficking and use at home and abroad—has been an utter failure. Racist. Imperial. Destructive. Despite spending billions of dollars on military intervention, supporting dodgy anti-drug regimes around the globe, and domestic arrest and incarceration, experts in the United States and worldwide have panned the initiative. Not even deputizing Elvis Presley as an honorary member of the Drug Enforcement Agency worked.

And now, as the Canadian government prepares for legal cannabis in October, the policy has our blessing.

The “Global Call to Action on the World Drug Problem” is a United Nations declaration. Signed by 163 member states—but not signed by certain Canadian allies including Germany and Norway—the document reaffirms the U.N.’s “commitment to effectively address and counter the world drug problem” alongside several other reaffirmations. The document reads like a twisted “Hang in there, baby” poster full of throwback inspirational pablum, culminating in a “four-pronged” pledge: “(1) reduce demand for illicit drugs through education, awareness, and prevention of abuse; (2) expand treatment efforts to save lives and promote recovery; (3) strengthen international cooperation across judicial, law enforcement, and health sectors; and (4) cut off the supply of illicit drugs by stopping their production, whether through cultivation or manufacture, and flow across borders.”

The document champions a “comprehensive, scientific evidence-based approach,” which sounds like the usual technocratic manual for managerial politics. But backed by the Trump administration and a U.S. government that has long been religiously committed to an imperial, racist, reactive, punitive, ineffective, and prohibitionist drug policy, the declaration becomes just another prickle in a tangled bramble.

Our backing of the declaration is all the worse given that Prime Minister Trudeau has championed the idea of evidence-based policy ever since he became a candidate for the leadership of his party. But the American-led war on drugs is a wasteland full of rotting ideas devoid of anything close to sound evidence to support it—and full of plenty of evidence that prohibition and punishment simply don’t work.  Critiques from the left to this effect are common. But American figures as diverse as George P. Shultz, the former secretary of the Treasury and secretary of state who served in the Nixon and Reagan administrations, and the libertarian Cato Institute have panned American drug policy, too. In Canada, Trudeau’s own government-side member of Parliament, the outspoken Nathaniel Erskine-Smith, said as much on Twitter after his government backed the declaration: “Drug prohibition is an abject failure and causes more harm than any drug use in our society.” He followed his tweet with a series of posts citing quotations and evidence that demonstrate just how much of a failure the U.S. approach has been, including one from Jane Philpott, the Liberal minister of Indigenous services who once held the health portfolio.

Trying to make sense of why Trudeau would back Trump and America’s disastrous approach to drug policy, analysts and commentators were quick to point to negotiations over the North American Free Trade Agreement. The strategic wisdom here is that trading a pro forma signature on the drug war for a better shot at a trade deal is a no-brainer. That could be true. The symbolism is free, and free trade is precious; no need to bring out the abacus.

If NAFTA is the reason we signed, then we have a problem. Let’s set aside the stunning inelegance and irresponsible cynicism of throwing heaps of vulnerable folks under the bus by backing a policy that routinely exploits and oppresses and kills them, and focus on the chances of the gambit working. For months, that has been the centrist and right-wing trade wisdom: to get NAFTA done, the government should cooperate with the mercurial Trump on non-trade issues. But if you’re trying to manage a raging bull, there’s no sense waving a red flag in his face, and there’s certainly no sense sauntering up and kicking him in the teeth. Trump is even less predictable than a bull; he’s more of a mad cow. Unpredictable. Difficult to manage. A threat to the country. And, above all, someone who appreciates shows of strength. Kowtowing to him with a “symbolic” signature, therefore, seems at best a risky bet that’s unlikely to pay off.

Recent polling suggests that Canadians dislike Trump, massively. Earlier this month, Abacus Data released data showing that 80 per cent of Canadians rated the U.S. president “negative.” A mere 9 per cent saw him positively, while 10 percent were neutral and 2 per cent have been away on Neptune for the last two years. So Trudeau has backed a bad policy from a disliked president by Canadians who’s impossible to predict or manage. Not exactly a banner moment.

Going forward, the prime minister would be better served—as would the country—by taking a hard line against Trump and America’s worst impulses, especially as our own country welcomes legal cannabis and begins to discuss broader drug decriminalization and legalization. While much of our history has run along parallel tracks with the United States, not all of it has—and on the issue of drugs, it seems the more we divert from them, the better. Even if some will worry that it places NAFTA at risk.