Climate action is going to create too many jobs

Mike Moffatt and John McNally: Two big bottlenecks stand in the way of Canada’s climate ambition—a shortage of skilled labour and a shortage of housing 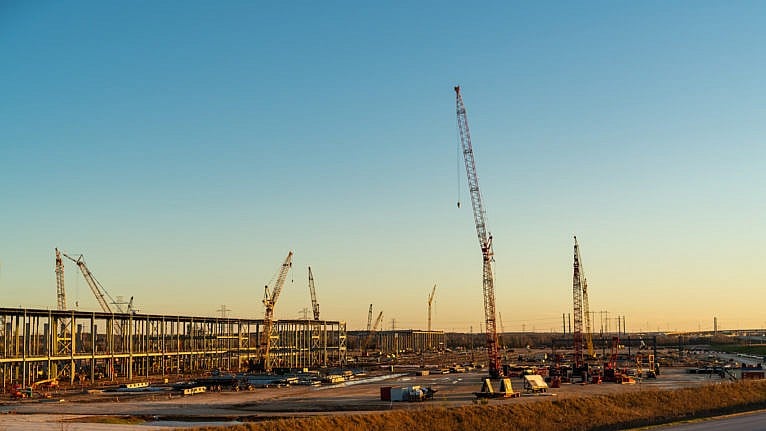 Cranes and large steel columns at Tesla GigaFactory under construction in Austin Texas on Jan. 4, 2021 (iStock)

Mike Moffatt is an assistant professor at the Ivey Business School at Western University and senior director at the Smart Prosperity Institute. John McNally is a senior clean growth researcher at Smart Prosperity.

Canada’s level of climate ambition targeted this decade keeps climbing ever upwards. We went from having no clear plan to reach a 30 per cent emissions reduction target to now having a 40-45 per cent emissions reduction target—and a plan to reach almost all of it in less than two years. This is great for Canada. Targets and policies that reduce greenhouse gas emissions fight climate change and create jobs in communities across the country.

In fact, our aspirations are so great that we have a new problem. This level of climate action is going to create too many jobs. Two big bottlenecks stand in the way of Canada’s climate ambition: a shortage of skilled labour and a shortage of housing. If we do not immediately address these, we will fail to hit our environmental targets and miss an opportunity for sustained economic growth.

Creating too many jobs is a problem because Canada does not currently have the available workforce to build these projects where they will occur. Even if it could get those workers, house prices are so high in those communities that it is unclear where they would be able to afford to live. If Canada wants to grow the economy, it needs to make sure it has the labour force and housing supply it will need to meet its climate targets.

This may seem counter-intuitive, but the idea that ambitious climate action creates jobs is pretty straightforward. Every zero-emissions technology we will adopt has to be designed, and then each part built, assembled, installed and maintained. That process creates jobs in manufacturing, construction, logistics and resource production, as well as other industries. Many of these jobs can be created directly in Canada, and some will need to be based in Canada, since we cannot import a building retrofit. But whether Canada can take full advantage of the growth opportunities offered by this level of climate action depends on a few factors.

The bulk of Canadian manufacturing takes place along the Highway 401-Autoroute 20 corridor that stretches from Windsor to Quebec City, and this is unlikely to change. Companies need to be in a place where they have access to key suppliers, access to labour, and the necessary infrastructure to get their products to key global markets like the northeastern U.S. However, this corridor is currently experiencing skyrocketing real-estate prices, which will limit the growth prospects of manufacturers in the region.

Let’s use an example to show why: Say an electric vehicle assembly plant in Oakville wants to supply more made-in-Canada EVs to the Canadian market to help meet climate targets. The company knows that in order to meet new demand, it will need to double its production capacity or it risks losing market share to competitors. The company begins to look at expansion, and immediately asks a question: Does this community have a specialized workforce big enough for us to double production capacity without facing labour shortages? Electric car manufacturing requires a specialized skill set, and the company needs to know those workers—or believe they will be there once production comes online—for companies to feel comfortable investing in new production capacity. Given the chronic skills gap, and a 2020 Canadian Manufacturers & Exporters survey highlighting eight of 10 manufacturers were already facing immediate labour shortages, this problem looks like it’ll only worsen as Canada tries to capture some of the jobs decarbonization will bring.

Firms can, and will, poach these workers from other manufacturers, raising wages in the process (which is a good thing). However, the sector will need an increased pool of labour to grow as a whole. Attracting a substantial number of workers from other parts of Canada feels an unlikely solution here, or at least not a cost-effective one. Companies will ask themselves, “How much would we have to pay to get workers here?”

A decision to expand production in the Greater Toronto and Hamilton Area will need to offer compensation levels commensurate with the cost of living in the region. Data from the Canadian Real Estate Association shows that median house prices in the GTHA have increased by 128 per cent in the last ten years. The National Bank of Canada’s Affordability Index identifies that an annual household income above $170,000 is now required to afford a representative GTHA home. An EV manufacturer therefore needs to make a decision whether they could offer salaries high enough to attract skilled labour to move from other parts of Canada into the region. If not, it will have greater trouble attracting the skilled workforce it needs.

RELATED: When in doubt, make electric vehicles cheaper for Canadians

This is not an issue isolated to Toronto. Home prices are growing even faster in smaller communities in southern Ontario. In the last five years, the price of a single-family home has more than doubled in almost every manufacturing community in the region. Brantford is up 113 per cent, Tillsonburg 142 per cent, and Woodstock 147 per cent. The hottest housing market in Canada since 2016 hasn’t been Vancouver, Toronto or Montreal, but rather London-St. Thomas, which has experienced 149 per cent price growth in just 60 months. How is a manufacturer in London going to convince talent from other parts of Canada to take a job and move to the community? And how will they retain young graduates from Fanshawe College and Western University, rather than watch them take a lower-paid job in a different community—say, south of the border in Houston—where real estate prices remain affordable?

If these two issues are not addressed, these jobs might not get created in Canada. Companies will decide they can hire a skilled workforce for cheaper elsewhere. That would be a tragedy, and an ironic one at that: For all of the concerns about how the recent federal budget did not tell a cohesive story about how the country intends to grow its economy, this argument highlights that Canada’s economy is about to undergo so much growth that it is literally going to run out of workers and have to start exporting jobs. Even if all the manufacturing jobs go overseas, and all the country has to do is install technologies built elsewhere, the construction industry is still facing national labour shortages in the hundreds of thousands.

These targets pose a real barrier to climate action, since projects only reduce emissions if they are built and used, which requires workers at every stage of the process. Workers also need places to live, potentially making Canada’s housing affordability crisis a barrier to both growth and meeting climate targets if it limits our ability to attract and retain the talented workers needed to build, install and maintain needed clean technologies.

Canada’s climate targets tell a feel-good story about combating climate change, and an undoubtedly and unbelievably positive story about growth. All signs show this will be more growth than the country can handle. Policymakers need to start taking this problem seriously, or we risk falling off track because we had too much of a good thing.