Corporate welfare and the gullible governments that pay it

Opinion: Ottawa and Ontario just gave Toyota $220 million for something it likely would have done anyway. Governments need to wise up. 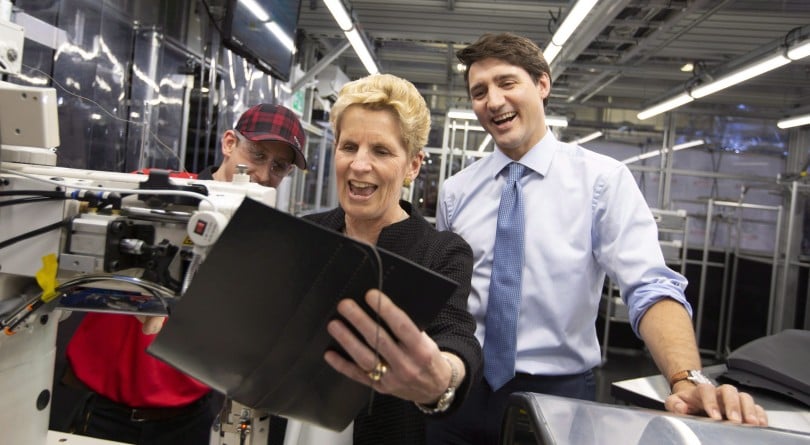 Prime Minister Justin Trudeau and Ontario Premier Kathleen Wynne laugh while trying their hand at leather stitching during their visit to the TMMC Toyota Manufacturing facility in Cambridge, ON on Friday, May 4, 2018. (THE CANADIAN PRESS/Peter Power)

Last week, Prime Minister Justin Trudeau and Ontario Premier Kathleen Wynne visited a Toyota plant to announce they were contributing $220 million towards a $1.4 billion investment by the company to create some 450 jobs (which works out to an eye-popping $488,888 subsidy per job.)

The justification for such gifts is familiar: taxpayers ‘need’ to provide these kinds of ‘incentives’ for Toyota, lest it take its plant and jobs elsewhere. We’re supposed to believe that Toyota—which five days later announced a record global profit of $29 billion—was prepared to abandon a Canadian plant in which it had already invested billions of its own money, and was readying to put in a billion more, unless our pliable politicians ponied up the pork.

If this sounds unlikely, it’s because it is. What’s far more likely is that Toyota—like so many other corporate giants in politically sensitive industries—has learned over the years that our governments are gullible suckers. And who can blame it? After all, if it doesn’t take the handout a competitor just might. The result is that companies that aren’t even on the hunt for handouts will say yes to them.

Hold on, critics will protest. It’s not as if they’re just getting money no-strings attached. There are job creation targets and loan repayment terms! So we can ensure we’re getting a return on our ‘investment,’ right?

Wrong. Most of the time nobody even bothers to check if job creation targets are met. And even if they are checked, and targets were missed, there’s unlikely to be any punishment. As for loan repayment terms, they are almost never made public, on the grounds that that information would be commercially sensitive for the recipient. This means taxpayers don’t even get to know if they ever get paid back.

READ MORE: The winners and losers if Alberta returns to a flat tax system

At this point, most people will concede that, in theory, such subsidies are wasteful, but many argue that here in the real world we need to ‘play the game’ or risk losing jobs to other jurisdictions that continue to offer up subsidies. It’s true: there’s no guarantee that every business that’s currently on the government dole would stick around in the event handouts stop. But the alternative is to be perpetually held hostage by businesses hinting they may leave unless they literally get free money from taxpayers.

(Some argue that businesses asking for lower taxes is analogous to demanding handouts. But the distinction is obvious: lowering taxes leaves all businesses with more of the money they’ve actually earned. Asking to keep more of what’s already yours is rather different than asking for free things from others.)

Stopping the culture of corporate welfare in Canada won’t be easy on either the supply or demand side; it’s been a part of the political landscape for so long it’s considered normal. But change needs to happen, if only because we simply can’t afford to continue on the current path.

Aside from the obvious step—stop transferring money from taxpayers to private, for-profit businesses—what else can governments do to help create a strong economy?

First, lower taxes. Businesses take handouts because they want more money—so we should instead make it easier for them to earn it. Simply taking all the billions poured into corporate welfare today and cutting business taxes across the board by an equal amount wouldn’t cost governments a dime. It would also ensure that it’s the marketplace, not political favouritism, that decides which businesses succeed.

Second, keep costs down. Carbon taxes, high electricity prices, minimum wage hikes and payroll tax hikes are just a few examples of costs that make it harder for businesses to turn a profit. Keep those costs down and it will ease the burden on businesses.

Finally, smarter regulation. It’s not just high-profile projects like Trans Mountain that get bogged down in regulatory hell. Unreasonable occupational licensing restrictions, archaic zoning rules and onerous legal compliance rules can add up to a hostile environment in which to start and run a business.

If governments follow the prescription above, subsidy-dependent industries will die off. But the trade-off will be a welcoming business culture that attracts competitive, sustainable businesses that are interested in making money the old-fashioned way: by actually earning it.