Shannon Gormley: Researchers in Europe have identified the conditions in which far-right vigilantes emerge. Canada ticks a lot of the boxes. 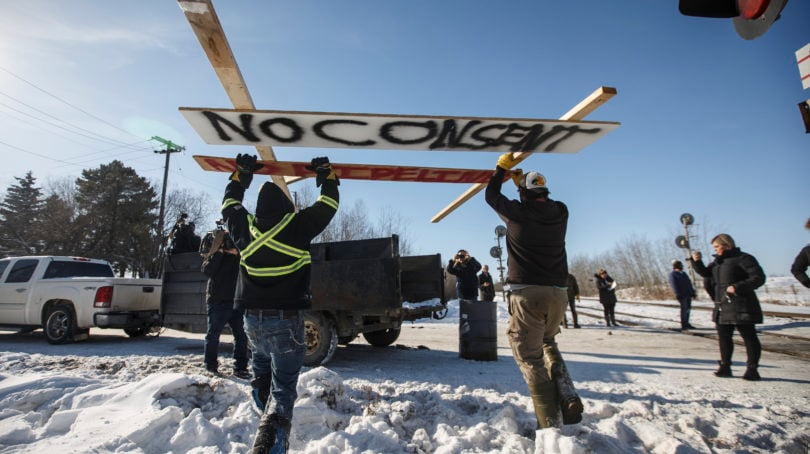 Counter protestors remove a piece of the blockade set up by supporters of the Wet'suwet'en hereditary chiefs at a CN Rail line just west of Edmonton on Wednesday, Feb. 19, 2020. (Jason Franson/CP)

APOLOGY: On Feb. 25, 2020 this article was published on macleans.ca and through social media accounts. The article when first published contained a photograph in which an individual was depicted. We did not intend to suggest or imply that the person depicted was a white supremacist. We apologize if any of our readers understood otherwise. The author of the article was not involved in the selection or publication of the photograph.

Canada should prepare to confront a surge in white supremacist vigilantes. That there will in fact be such a surge isn’t certain; it’s even less certain the vigilantes would be violent. But as Canada copes with a rail system shut down by Indigenous protesters it faces a heightened risk that a band of racist bully-boys will designate themselves the nation’s hall monitors of vital infrastructure.

That’s the most reasonable conclusion to draw, at least, from the findings of an international team of academics including University of Oslo scholar Tore Bjørgo who identifies several conditions that have encouraged grown men to run around Europe and North America in ill-fitting camo pants hunting migrants. The researchers identified these conditions in “Vigilantism Against Migrants and Minorities” last year; with the blockades already exciting violent fantasies on far-right online chat boards it seems wise to consider how they might apply to Canada now.

1. Does the country face a specific shocking event?

Passenger service paralyzed; ports flooded with stranded container ships; 1,500 rail workers laid off; critical propane shortages; warnings of a recession. Affecting every region of an enormous territory and every community of a diverse society, the railway blockades have created more than a crisis in Canada—they represent a crisis for the whole of it. Vigilantes have been given the precious gift of a problem they can pretend to fix.

2. Is this crisis associated with a marginalized group perceived as threatening?

Not only are Canada’s Indigenous people marginalized, and not only are they perceived as threatening by many in the same white majority that marginalizes them: their very existence as a marginalized minority poses a threat to what it is white supremacists imagine the nation to be. Ultimately, it wouldn’t be the protests, but the hallucinatory existential threat of Indigenous people that white supremacist vigilantes would fight. Onward, make-believe soldiers.

3. Does the country trust authorities to protect people?

Canadians don’t have especially low levels of trust in their institutions and organizations, but they don’t have particularly high levels of trust either. What they have is declining trust. Proof Inc. pollsters made this finding several months before the Liberals were punished with a minority government after their corruption-and-cover-up scandal, and many more months before whatever is about to happen next to the country’s railway. In other words, with regard to trust, things weren’t so great to begin with; then they got less great; now they’re about to get a great deal worse. Where Canadians don’t trust their institutions, they may trust the guy in the antler logo sweatshirt prophesying total system failure.

4. Does the country have permissive legislation for armed defence?

With its restrictive gun laws, Canada has blunted the risk of marauding gangs of well-armed thugs. That’s of limited comfort, though. White supremacists have found ways to shoot up countries with similarly restrictive gun laws. And most vigilantes don’t shoot people, anyway. Thugs don’t need to commit violence. They have only to threaten it.

5. Does the country have a historical tradition of militias and vigilantism?

Canada’s deficit of gun culture may offer similar protections as its deficit of guns: the country’s history of militias and vigilantism being less storied than America’s history of the Ku Klux Klan or Central Europe’s history of fascist militias, a young nationalists’ imagination is less easily sparked. However, that didn’t prevent the FLQ from terrorizing Quebec several decades ago.

6. Does the country have a base of support for far-right vigilantism among the public and politicians?

Far-right vigilantes will always find support from far-right media. But while every Rebel mouth may complain of being silenced, their real problem, and Canada’s advantage, is they’re all so cartoonishly hideous  in their views, comportment and every other conceivable quality that no one of consequence can bother to listen to them. They’re just tacky carnival barkers who exchanged whatever dubious degree of dignity they once unconvincingly pantomimed for ticket sales—then they discovered ticket sales were low. More dangerous than the fringe clowns are the serious politicians who very occasionally try to get in on the joke. Peter MacKay, Conservative Party leadership candidate, tweeted his support of Albertan vigilantes who took it upon themselves to try their hand at clearing barricades; he later called the vigilantism “an act of good citizenship.” In the midst of a national crisis, when Canadians hear respected public figures advocating madness they will begin to believe lunacy is sane.

7. Do the police turn a blind eye to far-right vigilantism, or even accept and support it?

Somehow it’s difficult to imagine Canadian police calling in reinforcements of neo-Nazis (although as close to the border as Portland, a “patriot movement” militia member helped police arrest an anti-fascist activist a few years ago). And when the Soldiers of Odin recently became active in B.C., some residents and anti-hate groups criticized the local RCMP for signalling that the group is not a concern for public safety. As well, Canadian law enforcement is accused of targeting people of colour often enough; white supremacists may assume they’ll have license to do the same. Even if wrong, they would be emboldened, and if emboldened, they would become violent.

No one likes to see the law defied, or Canadians’ livelihoods, health and safety compromised. Both protesters and far-right vigilantes may have taken the law into their own hands, but come on: the threat posed by white supremacist vigilantism is orders of magnitude worse. Across vastly more regions, vigilantes have hurt vastly more people and targeted vastly more vulnerable communities in a vastly more brutal manner. American Minutemen chasing Mexicans down with guns, Bulgarians stalking Syrians with hatchets, Ukrainian militias splitting apart Roma camps with axes, balaclava patrols throughout Finland, the Netherlands, and Germany—white supremacist radicalism is one of the great global challenges of our time.