Donald Trump is wrong about NATO

Opinion: Despite Trump's rhetoric, relative defence spending is falling for many NATO member countries, including America—and collective defence is cheaper than other options 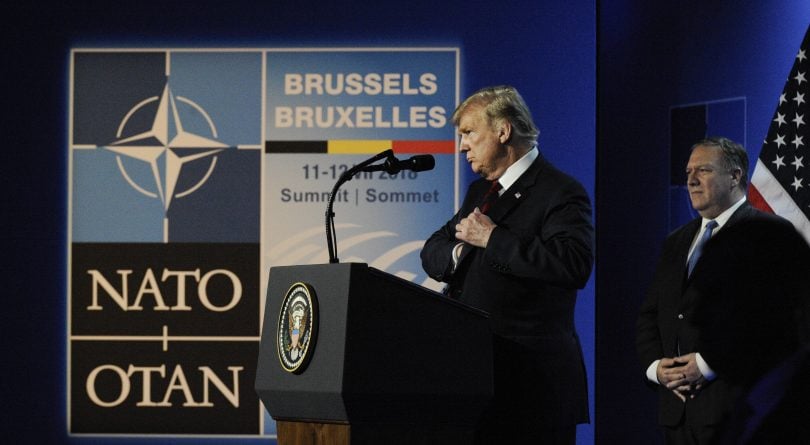 US president Donald Trump is seen during his press conference at the 2018 NATO Summit in Brussels, Belgium on July 12, 2018. (Photo by Jaap Arriens/NurPhoto via Getty Images)

By now, in the wake of the tumultuous G7 and NATO meetings, it is obvious that Donald Trump sees no value in collective agreements. Whether originating from the United Nations, NATO, the G7, or NAFTA, he views such structures as valueless limitations.  To take full advantage of America’s superpower status as leverage in negotiations, he needs to be in a one-on-one context with his chosen adversary.

Trump is a supreme individualist and, as he has said repeatedly, “I’m the only one that matters.” This is the reality of electing a “transactional” leader rather than a political one. With his self-described character as an invincible deal-maker, he cares only about one outcome from any negotiation: winning. Once the other party in the discussion is isolated, he can use any combination of American military, economic and intellectual advantages as leverage to achieve his desired outcome. And as we have seen, he is prepared to exploit that leverage ruthlessly against friends, trading partners and allies.

Some, like Canadian Prime Minister Justin Trudeau, view Trump’s negotiating style as “totally unacceptable,” while others see him more as a bully (the view from China). As all bullies should know, winning a fight becomes more difficult when friends step into the fray. Whether in a civil or military context, the odds swing quickly against a single aggressor even when the total force calculation is still in their favour.

That brings us to the brouhaha over the North Atlantic Treaty Organization, a formal alliance designed to build a collective security structure between Western Europe and North America to thwart the former Soviet Union. In this, it was spectacularly successful: After a blood-soaked and bomb-shattered half century, Europe has been largely peaceful and prosperous, and since the end of the Cold War, NATO has broadened its view of security and conducted several missions in the Middle East. Despite this, Trump has described NATO as “obsolete and expensive” and that “the United States was paying for anywhere from 70 to 90 per cent of it.”

Trump is wrong about NATO on both counts. Disrupting that organization will cost the United States far more than they are already paying for their defence.

To get a sense of what countries spend on defence, it is better to compare costs to the total federal expenditures of each nation. That way, the percentages spent on defence better represent the willingness of a government to actually commit funds and provide a measurable standard that can be compared between countries and different eras, regardless of the economic circumstances.

The 2017-18 U.S. budget, which totalled USD$1.74 trillion, allocated USD$610 billion, or 35 per cent, to defence. This is a big outlay by any measure, and that number represents 50 per cent of the country’s discretionary spending. However, the idea that the United States is somehow underwriting NATO security in direct spending is false. The United States has a global military presence, and so their outlays for defence represent that broad coverage, not merely their commitment to the NATO Treaty.

How does Canada compare to the United States in this regard? At the time of Confederation, according to Livio Di Matteo, Canada spent approximately nine per cent of the total federal budget on defence. That is almost exactly where we stand today, notwithstanding the recent promise to boost the defence budget to $30 billion by 2026-27. Defence spending spiked to 65 per cent of the total budget during the First World War, then to 80 percent for the Second World War and to 43 percent for the Korean Conflict, but in between, it has stayed below the 10 per cent line. The lowest point was 6.5 per cent in 1999, when the “Peace Dividend” was being harvested from the defence budget. Typically, it required the rise of a new security threat to loosen the purse strings and get headed back to the historical figure. This is normal for our democracy.

It may seem improbable that during the Cold War, the Vietnam War, the Falklands War and a host of other conflicts that relative defence spending could be falling for NATO countries at such stunning rates—but that’s exactly what was happening.

In fact, the world has steadily become a more peaceful place. The Peace Research Institute Oslo reported in 2018 that fewer people are being killed in conflicts and that this is a continuing trend. Keeping major conflict down allows more effort to be placed on solving, or at least containing, regional problems. NATO has provided a credible defence to its member states and, more recently, become the backbone of a significant intervention force.

The ability of NATO to take on problems and work cooperatively toward their resolution has prevented major conflict in Europe, advanced political and military understanding plus built a collaborative working relationship between European and North American military forces. If Trump thinks that “going it alone” will somehow be cheaper or more “fair” than their current situation, he is absolutely wrong. The Swedish data shows that enormous economy has been achieved since 1960 despite periodic problems in the NATO geographical sphere and some major ones outside it.

But how is this possible? Why would collective defence be cheaper than other options? The answer is that a good alliance builds bonds of trust that hold it together. NATO has taken a disparate group of states and worked to steadily diminish their differences and strengthen the commonalties. The military aim is to build a force with high levels of interoperability. The political aim is to heighten awareness and strengthen mutual upstanding so that assessments are built on a common appreciation of available intelligence, so that decisions can be made quickly. Acting promptly with a credible force, even only for the sake of containment, limits the options for an aggressor and reassures the Alliance membership.

Among the myriad advantages that NATO provides to its members are doctrinal and logistical standards that are the same for every country. These basic building blocks enable a host of related activities, including concept development, lessons learned and best practices, simulation and modelling, plus cooperative technology research. Common purchasing of everything from ammunition to wrenches drives down the per-unit cost and increases the likelihood of obtaining supplies and spare parts from an allied nation when deployed far from home bases or ports.

NATO also invests back into the member states. The organization builds centres of excellence that are located throughout the member countries, with the first NATO COE accredited in June of 2005. Today, there are 24 in operation with more in the offing. The work of this growth industry spans traditional military activities but now also includes studies areas like strategic communications, defence against terrorism and civil-military cooperation, and scattering them across the member countries sends the message that no country has a monopoly on innovation. Only one such centre, after all, resides in the United States.

And while it was forged out of the Korean War, NATO continues to adapt to the changing geopolitical situation. The North Atlantic Cooperation Council, which was established in December 1991 and was renamed the Euro-Atlantic Partnership council in 1997, is a forum for the discussion and promotion of security issues for both NATO members and the Alliance’s former adversaries. The Partnership for Peace, a practical programme of military cooperation and assistance launched in 1994, is a tailored to help establish democratic control over armed forces, assist the military reform process and help develop NATO-compatible militaries. Both initiatives have been spectacularly successful in averting conflict in the Macedonian-Greek-Turkish region.

Today, European Union and NATO cooperation on conflict prevention and crisis management is governed by the Platform for Cooperative Security agreed to at the OSCE’s 1999 Istanbul Summit. In this, the Allies expressed their readiness to deploy NATO’s institutional resources in support of the OSCE’s work. At Helsinki later that year, The EU committed to being able to deploy and sustain for at least one year, military forces of up to 60,000 troops to undertake the so-called “Petersberg tasks” of humanitarian and rescue missions, peacekeeping and combat forces in crisis management.

So the NATO alliance is far from obsolete, and it is not expensive. Trump is dead wrong about collective agreements—and he needs to learn more before he launches any further false tirades against an economical, efficient and effective organization like NATO.