Election 2019: Let the games begin—and may the odds be ever in your favour

Tabatha Southey: Between the Greens' 'own-goaling,' the NDP being short of good enough, the Conservatives wanting to erase Andrew Scheer's 2005, and the Liberals' knack at keeping SNC in the news—here's how each party stands at the opening of election season 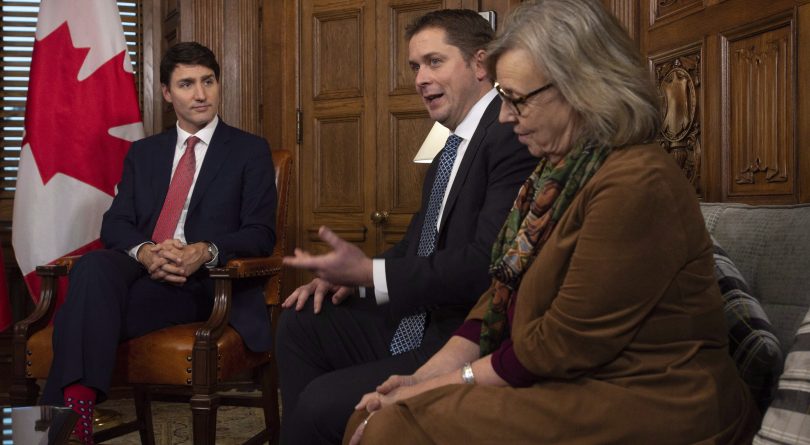 Prime Minister Justin Trudeau and Green party leader Elizabeth May listen as Leader of the Opposition Andrew Scheer delivers some opening remarks as all party leaders meet in the prime ministers office to discuss francophone issues in Ottawa. (CP/Adrian Wyld)

The writ dropped on Wednesday, marking the start of a 40-day Canadian election campaign that might well end up making Caesar’s Rubicon-crossing “electoral” strategy look like the Teddy Bears’ Picnic. If you haven’t been keeping your eyes glued to the news before now, either because you don’t have the time or because you don’t hate yourself, here’s a brief primer on how things stand at the opening of the season as we move gracelessly on toward the main event on Oct. 21.

Polls suggest the Liberals and Conservatives are pretty much tied for first place while the NDP and Greens are locked in fierce competition, each apparently, determined to be in fourth place.

Well behind those two are the People’s Party of Canada which is helmed—as much as something better suited to being desperately clung to or abandoned via lifeboat can be helmed—by former Conservative cabinet minister and Leader-but-for-the-grace-of-God (or of the Dairy Farmers of Canada), as we call him in this country, Maxime Bernier. There is also, of course, the Bloc Québécois, which could be forgiven for just deciding to take a week off to deal with the confusion of the Green Party apparently putting the moves on their base.

In response to the remarks made by Montreal-area MP Pierre Nantel (Green Party, née the NDP) during a radio interview this past Tuesday that he would most certainly vote for separation in the event of a referendum in Quebec, the Greens, initially and almost fittingly, hedged their bets.

“Individual MPs are allowed to express their own opinions on this matter,” Green spokesperson Rosie Emery said in a statement to the Toronto Star. “Since our position on Quebec sovereignty is not one of the party’s core values, candidates who support the movement are not screened out by our vetting process.”

That’s hedging moved up to an art, that’s topiarying your bets. That leaves room for the “The Green Party is not pro-cannibalism but not eating people is not one of the party’s core values,” in a pinch.

MORE: Election 2019 primer: Jobs, the economy and the deficit

On the subject of Quebec’s recently passed Bill 21, which forbids many public employees from wearing religious symbols, making it impossible for a Muslim woman in Quebec whose faith requires her to wear, say, a hijab, to work as a teacher, to give one example. Green Party leader Elizabeth May insisted that “religious intolerance of this kind has no place in our society.”

And yet Ms. May left the impression that this exact same intolerance should feel comfortable putting its feet up in her party, where she will not insist they oppose the bill. “The Green Party does not tell candidates what they can or cannot support” is the literal party line. At a glance that may seem noble, but when you join a party, it’s a bit like opening a franchise: I see the sign, I want to know what’s in there without grilling the manager.

You can have better or worse service at your outlet, maybe suggest alternate toppings at branch meetings or to head office, you can set the chairs up any way you want, but if I’m going to pull in there on the road, make that the one stop I’ve likely got for a long time, I’d sure as hell like to know what my favourite meal is on the menu, and re-opening the abortion debate is off the table.

On Wednesday, Ms. May reversed course, having been reminded that the Green Party is a Canadian federal party and would, at least in theory, like to govern (the entirety of) Canada one day. She now says she plans to plans to talk to Mr. Nantel. And if it turns out that when he said Quebec “should separate quickly,” as he did in Tuesday’s radio interview, he meant that Quebec “should separate quickly” and not as Ms. May suggests, that the province should not do that, he will be out.

Andrew Scheer’s Conservatives have a number of weapons in their arsenal (SNC-Lavalin, and the Liberal Party’s seemingly inexhaustible capacity for keeping it in the news in the worst way possible being the most obvious one), which almost makes one wonder why the party reached for the sticky bomb.

On the last day of August, setting what I fear will be the tone for the entire election, Mr. Scheer, on the heels of an Ezra Levant tweet on the same subject (for the record, I will judge you by the company you tweet), tweeted a link to the Daily Mail story so thinly sourced the tabloid might as well have quoted a sylph. The story claimed that convicted child murderer Jon Venables would be released any time now and resettled in Canada.

It is “disturbing that this pedophile child killer might come to Canada,” Mr. Scheer wrote, apparently under the impression that the duties of the prime minister of Canada, the job he’s out to get, primarily consist of forwarding chain emails to the remaining young relatives too polite to tell you that www.SuperShockingTotallyNotFakeNewsMostlyAboutBigfoot.co.uk is not a respected publication.

“As Prime Minister I won’t let him come here,” Scheer wrote of the entirely (and obviously) fictitious threat. “Where does Trudeau stand? Our country should not be a dumping ground for murderers, terrorists, and perverts.”

If you’re reading this Mr. Scheer, I hope it brings you some comfort to learn that Great Britain officially ended the practice of penal transportation in 1857 and, what with us being our own country now (no, really, click on the link!), they’re not allowed to just up and send us unsolicited non-citizen criminals in the mail, even if they’d like to. You breathe easy, sir. Open that Amazon box if you want to.

As for Justin Trudeau’s opinion on the matter, I just don’t think the Prime Minister, any prime minister, should be asked to comment on every story coming out of The Daily Mail. Seems to me that would mean a lot more weighing in on the merits of individual celebrity’s thighs than is strictly proper for a world leader.

It seems likely that this just-shy-of-pizzagate gambit was the Conservatives’ response to a very real as in taped-and-read-into-Hansard-real video of Mr. Scheer explaining that “homosexual unions are by nature contradictory” to the “survival” of “society” and something about dogs and tails.

I bring this up even though we have all been told that it’s unfair to bring up anything Mr. Scheer said in 2005. Does he still believe what he said in his prepared remarks, which was that same-sex marriage is the antithesis of everything that society needs to survive? He’s certainly not telling us otherwise, “but 2005!”

I’m just not sure what it is that’s so special about 2005. Is it a magic year that doesn’t count and from which we allow people aspiring to become prime minister to grandfather in really terrible opinions?

Perhaps people were on the cusp of asking whether a generation of LGBTQ Canadians should be expected to grow up knowing that the leader of their country holds their unions in such intense disdain, and that their fellow Canadians weren’t bothered by this on election day. Even if, and that’s a gargantuan if, those are merely Mr. Scheer’s deeply held personal opinions as of the last time he spoke clearly on the issue that he just happens to tell everyone in prepared remarks, as we’re assured, and they won’t affect policy, now that the question is “settled”—that’s got to sting.

Is there another kind of bigotry we’d let go as “just his personal opinion that he strongly expressed and advocated for as an elected official?” Which one would that be?

Suffice it to say, the Conservatives would much rather have you focusing on the future living arrangements of English criminals than their leader’s very recent past. Who knows where our attention will be asked to go next?

The stakes are very high in this election and there’s really no saying how things will go, but I can tell you that all indications are that the Greens will continue to own-goal at championship levels, the NDP will honour their long tradition of just never being as good as you hope they’ll be, and the Liberals will try and undercut the Conservatives’ chances, a job they seem to have efficiently out-sourced to Doug Ford. The Conservatives will attack the Liberals with all they’ve got. The Liberals will continue to respond with, “That’s all you’ve got? Here, have a bit more.“ And Maxime Bernier will continue to pour his energy into the fight that really matters. Specifically, trying to pick a Twitter fight with a 16-year-old Swedish girl.

This story has been edited for form from an earlier version