The passage of Bill C-16 is a victory for transgender Canadians. But here's why more work still needs to be done. 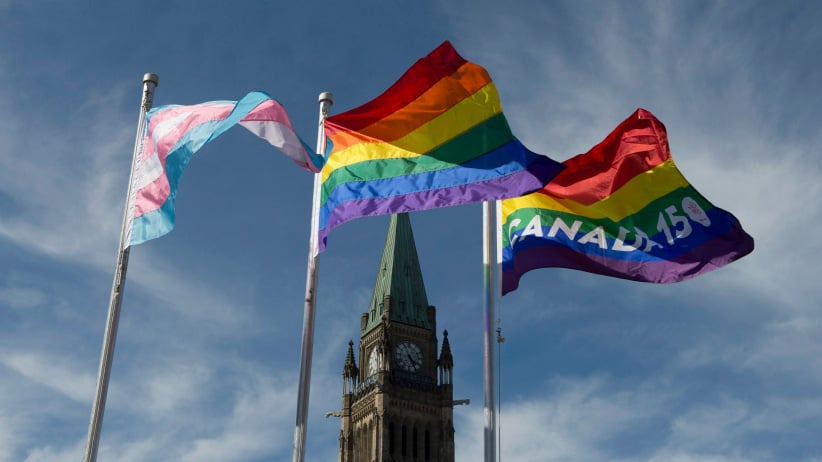 Four Octobers ago, I applied for a seasonal position at a provincial liquor store. I was juggling two awful part-time jobs—driving for an escort agency at night and barista-ing during the day for an empathy-void boss—and looking to get out of both. This liquor store was in a hip neighbourhood where you could buy pour-over coffee and American Apparel clothes. The local LGBT centre was two blocks away. The job paid well, three bucks over minimum wage.

I had several years of high-volume retail experience; they interviewed me on the spot. The manager, a middle-aged man with a beard, liked me right away. He used language like “When you work here,” we swapped holiday retail drama stories, stuff like that. Then he said: “And when could you start?”

“Middle of November,” I replied without thinking, matching the timeline they were looking at for starting out new hires. “I go in for major surgery soon, I can’t work till a few weeks after. But I’ll be fine by then.”

A wave of shock moved through his face as he, in a microsecond, re-evaluated my body and realized a new truth about its history.

The interview’s remaining time was short, the rest of the man’s words an octave lower: “They should hire you back at your old job. I really think that’s what should happen,” he said, before he said his goodbyes.

Driving away, my first emotion was shame. Why the hell did you tell him you were having surgery? I thought. Then it was anger at the store employees for not giving me time to prepare for an interview and femme myself up. Which turned back into anger at myself—why did you drop off a resume in a hoodie and jeans and no makeup? What made you think that was a good idea?

What’s wrong with you?

As it might go without saying, the manager didn’t call me back. I went off to get surgery—and yes, it was for vaginoplasty, i.e. that surgery—then came back to the café and found myself with zero hours on the schedule.

It was Christmas season by then, though, and I found a full-time retail job right away. I dolled up for the interview, and this time I kept my mouth shut about the state of my body. I told my new boss I could start right away. Soon I was shelving and bagging and pushing carts on my feet with my aching, weak, recovering body, five weeks fresh from the operating table. (Doctors recommend waiting six at minimum before you go back to work, and that’s for a desk job.) I quit driving for the agency and took my car off the road. My new co-workers, kind and gentle people all, said in those weeks that I appeared in pain. I forget what I made up in response, or if I responded to them at all.

Blessedly, those months were but an annoying blip in my weird little life. In my seven years since transition, I’ve had more luck with employment than a lot of trans girls, and currently I do pretty okay.

I recount those experiences because I think about them every time there’s ado about anti-discrimination laws. And last Thursday, Bill C-16 passed the Senate on third reading, installing new federal protections for transgender people across Canada. I’m a transgender woman and I’m very happy about this. I extend my blessings and thanks to those who worked to make it happen.

Would but for the insistence of various religious conservatives like Senator Don Plett—to whom I am likely and unfortunately related—earlier incarnations of this bill would have passed some years ago. Far-right news sites are currently bemoaning the loss of their freedom they are convinced C-16 will bring, with University of Toronto professor Jordan Peterson—slammed by his critics as transphobic in light of his refusal to use gender-neutral pronouns—shuddering that “compelled speech has come to Canada.”

This is a fallacy. Gender identity and gender expression are now statuses entitled to federal discrimination protection similar to other protections enjoyed by various marginalized groups in the country. Such prior protections enshrined in the Charter of Rights and Freedoms, to my knowledge, have not resulted in the destruction of “free speech” across the country; it is conspiratorial to think extending these laws to transgender people will incite national ruin. Indeed, rather the opposite: More likely, any marginalized person belonging to a group protected under the Charter would tell you that despite such federal efforts, racial, sexual, and homophobic discrimination (to name a few) still exist.

After all, the liquor store guy almost certainly chose not to hire me because I was trans. My province had anti-discrimination statutes, but I didn’t think to make a complaint—at first because I blamed myself, then because I realized: How could I prove such a thing? What options did I really have?

I recently spoke with Fae Johnstone, a non-binary trans femme and activist who advocated for C-16 in Ottawa. “Proving human rights cases has an extremely high burden of proof,” they acknowledged. “The bill, frankly, was largely symbolic—but a needed piece of symbolism.”

To which I say: Indeed! This victory was largely symbolic—and sometimes symbolic victories are really meaningful. To consider an inverted case: 14 states in the U.S. voted in constitutional amendments banning gay marriage in 2004 and 2005. The impact on gay mental health was palpable. As summarized by HuffPost’s Michael Hobbes:

The most chilling thing about those numbers is that the legal rights of gay people living in those states didn’t materially change. We couldn’t get married in Michigan before the amendment passed, and we couldn’t get married in Michigan after it passed. The laws were symbolic. They were the majority’s way of informing gay people that we weren’t wanted.

In last Thursday’s vote, the majority of the chamber informed trans Canadians we were wanted. It’s not a small thing. Thank the Lord.

Yet where media quick takes will get it wrong are in sweeping statements such as this CBC headline, “Canada enacts protections for transgender community,” a benevolent yet ultimately misleading statement for those scanning the news. Transgender people still live this week under the same disparate material conditions caused by transphobia in which we lived last week. As University of Toronto professors Brenda Cossman and Ido Katri wrote in a Globe and Mail editorial on Thursday:

Anti-discrimination laws are limited in their ability to tackle structural inequalities … We need to consider the disproportional rates of incarceration, criminalization and underemployment, as well as the limited access to health care and education, suffered by gender-diverse individuals and communities. We need to confront that these numbers are significantly higher within black and Indigenous communities.

Trans people continue to face horrors, hate, astronomical rates of suicide and poverty in particular. Anti-discrimination law is but one tool in a larger kit to fight these monsters. Johnstone said as much, too: “My hope now is that we see serious national action on other [trans] issues … specifically around healthcare and social services.”

Last Thursday, opponents of transgender rights showed up in Ottawa to testify against us and they lost. This is a moral victory. And there must be more to come.

Casey Plett is the author of the Lambda Literary Award-winning short story collection A Safe Girl To Love. Her reviews and essays have appeared in The Walrus, The New York Times ArtsBeat, Plenitude, and The Winnipeg Free Press. She is co-editor of the forthcoming anthology Meanwhile, Elsewhere: Science Fiction and Fantasy from Transgender Writers to be released September 2017 from Topside Press.