How Canada enabled the rise of Mafia boss Vito Rizzuto 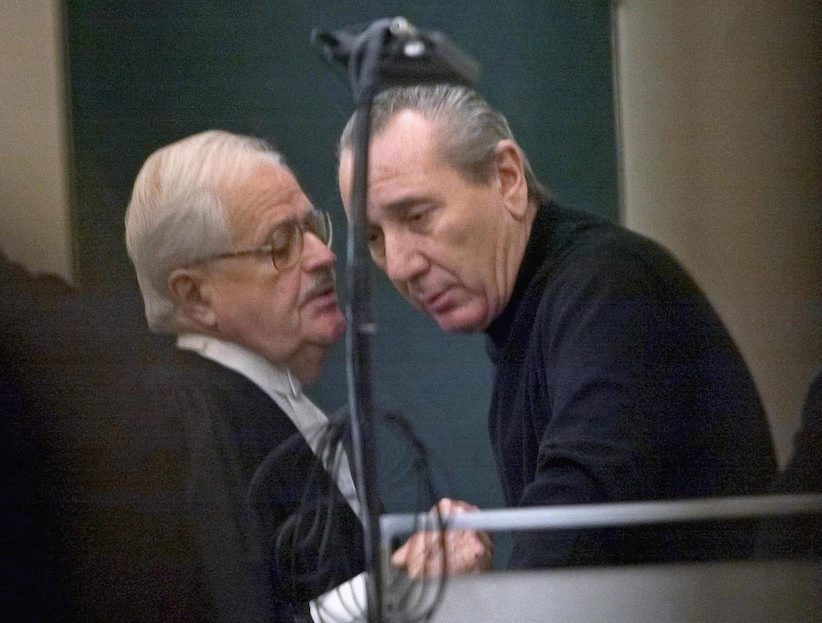 Vito Rizzuto (right), the reputed head of the Montreal Mafia, speaks with his attorney Jean Salois after his hearing in Montreal on Feb. 6, 2004. (Ryan Remiorz/CP)

If there ever was a truly Canadian mobster, it was Vito Rizzuto. He glided through life at the top of a multi-million-dollar international empire of large-scale construction fraud, drug trafficking, extortion, bribery, stock manipulation, loansharking and money laundering. The only things in Montreal it seemed he didn’t control were the city’s nasty winters, and he routinely fled those for warm Caribbean climes, where he mingled business with pleasure on manicured golf courses with city bureaucrats, union and businessmen, Hells Angels, and other Mafiosi. Almost four years after his death, his shadow continues to float behind murders in Quebec and Ontario.

His life was a blend of business and blood. His maternal grandfather was the Mafia boss in Cattolica Eraclea, a small village in Sicily, where Vito was born. The other grandfather was brutally killed in a stone quarry in Paterson, N.J., in 1933. His father, after moving to Canada in 1954, became the Canadian branch plant manager for the Bonanno crime family in New York with the force of violence. Canada then became an appendix of the American La Cosa Nostra.

A large part of his skill was the ability to pull together disparate North American groups who otherwise might have ignored or plotted against each other, from rival Haitian street gangs, Hispanic cocaine traffickers, Montreal’s Irish West End Gang, and bikers in the opposing Hells Angels and Rock Machine, to factions from the Sicilian mafia, Calabrian-based ’Ndrangheta, and the American La Cosa Nostra. What Rizzuto created was something wholly modern and businesslike: a consortium. Under his leadership, these criminal factions could pursue shared business interests. Rizzuto convinced them that there was enough cake for everyone to eat.

He rarely spoke with media. In one of few exceptions, he described himself as a mediator. “People come to me to solve disputes because they believe in me. They have respect in me,” he once said to Michel Auger, Quebec’s best-known crime reporter. That description was wholly true, although deliberately lacking in details. Rizzuto preferred to speak with his intense brown eyes, expressive face and loaded body language. His very few words, such as what he uttered to Auger, were as accurate as a bullet from one of his hitmen. Preferring to see himself as a gentleman and a man of destiny, he didn’t need to raise his voice or lose his temper to make life-altering—or life-ending—decisions. His demeanour was that of someone born into royalty, playing out a role that had been determined long before his conception. It was as though he were from the House of Rizzuto, not the Rizzuto crime family.

And if survival for himself and his house meant killing others, then that was his destiny too. Vito Rizzuto had a lynchpin role in the importation of narcotics into North America. Getting close to him meant the opportunity to quickly become a millionaire.

The Port of Montreal is one of a few vital entry points for drugs bound for the United States, and Rizzuto had more control over it than anyone else. Once the drugs reached Montreal, his people had to worry about little more than speed limits as they drove the narcotics through back roads and into New York City, the world’s top market for cocaine. A 2006 Canadian Senate report concluded that 15 per cent of stevedores and 36 per cent of checkers who work in the port of Montreal have criminal records, as do 54 per cent of the employees of an outside firm with the contract to pick up garbage and to service ships on the docks.

In 2004, when he was arrested and then deported to the United States two years later to face criminal charges for the 1981 murders of three Bonanno captains, he warned Canadian authorities that they would regret the day he was gone from the streets. While he sat helplessly in an American prison after pleading guilty in 2007, his father and his eldest son were slain. For the first time since the late 1970s, his many businesses—both criminal and outwardly legitimate—were under siege. A stampede of gangsters, politicians, crooked cops and business people deserted or exposed him. A lifetime of schooling in the Mafia hardly seemed enough training for the challenges awaiting Vito when he finally walked free in October 2012. He died of lung cancer in December 2013.

The secret of the Rizzuto crime family’s success was not violence, but the ability to build a network of trust with politicians, businessmen, union leaders, construction builders, and bankers. A recent report by Transparency International, a Berlin-based organization that works to stop corruption around the world, criticized Canada for not fully complying with its international commitment against money laundering. Our country, the report says, fails to extend due diligence requirements to the full range of non-financial professionals and businesses that might be involved in the buying and selling of real estate. “In Canada, anti-money laundering provisions cover real estate agents, brokers and developers, notaries from British Columbia and accountants,” the TI report reads. “However, other professions such as lawyers, law firm and Quebec notaries are not obliged to conduct due diligence or submit suspicious or large cash transaction reports.” Given their roles in finalizing the sales of houses, this is a major loophole that allows organized crime to flourish.

Another issue, underlined by the report, is the lack of requirements for any person involved in real-estate closing to identify the beneficial owner of customers. In other words, foreign companies can buy real-estate property without providing any information about their real owners or their corporate structure, often a trust or a shell company.

Rizzuto enjoyed this “doors wide open” approach to money laundering in real estate, and using his networks, deployed many professionals to help him navigate it. His preferred out-of-office activity was golf, the international pastime of businesspeople. Mafiosi like him may be specialists in violence, but they are also experts in social and economic relationships. There was a joke that when the economy got tough for him and his father, they laid off judges, politicians and CEOs.

And Canada has failed to properly commit resources to fighting back. Since 9/11, about 500 Mounties who were working on organized crime investigations have been moved to national security and terrorism cases, as former RCMP Commissioner Bob Paulson confirmed on March 2016. The RCMP also sidelined more than 300 investigations, mostly into organized crime, as it redirected more than $100 million to its national-security squads after two Canadian soldiers were killed by Islamic State sympathizers, as the Globe and Mail reported using government records obtained under Access to Information laws. Meanwhile, despite the need for data to inform resourcing and policy, there are currently no standardized data to monitor the nature and extent of organized crime at the national, provincial/territorial or local levels. Canada cannot continue to invest resources into terrorism cases at the expense of organized crime problems at home.

Contrary to popular belief, the ultimate goal of the Mafia is not money—it’s power. Money is simply a tried-and-true way of helping attain the power and influence that makes a crime family respected for generations. The Mafia is, instead, a power system based on collusion and connections, and its violence is inextricably linked to political and economic interests, as Quebec’s recent Commission of Inquiry on the Awarding and Management of Public Contracts in the Construction Industry, chaired by France Charbonneau, clearly revealed.

But we have not yet addressed this, because ignorance is bliss. And when people aren’t looking is when people like Vito Rizzuto thrive.