If anything will save us from the plight of 2020, it’s empathy

Michael Coren: We've seen evidence of it already. The very act of wearing a mask, for example, is a leap of empathy by thinking in the communal and behaving in the fraternal. 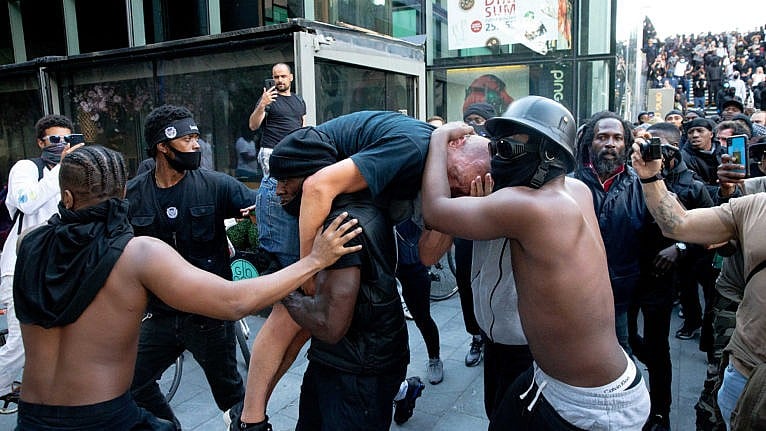 A group of protesters protect an injured man, taking him to safety during a U.K. protest (Luke Dray/Getty Images)

Rev. Michael Coren is ordained in the Anglican Church of Canada.

My father’s family were Russian Jews. Most left for Britain at the beginning of the 20th century, but some remained. We kept in contact with part of the clan, and as a child I met my very Russian, very funny, very loud great-uncle. In between laughs and vodka he told us stories about his life, but said little about the Second World War, what he called the Great Patriotic War. I knew that he’d served for three years, became a major, got to Berlin, and must have seen the most extraordinary things. I asked him in my confident naïveté what it felt like. He paused, took yet another drink, and then said, “It’s not what you feel, it’s that you feel. It changes everything.”

He’s gone now of course, but that response from this gruff, great man has remained with me. It is in a way the quintessence of empathy, and if anything will save us after the political and medical quagmire that was 2020, it will be that pristine, supreme quality. Hope and pray that 2021 is the year of empathy.

RELATED: The world is broken—and human kindness is the only solution

In fact, we’ve seen evidence of it already. Shared experience is a unifier, and when the enemy and the danger are indiscriminate in their violence, we evince, at our best, something powerfully empathetic. Those who oppose wearing masks, rather like those who reject vaccinations (often the very same people), are loud but relatively few. The surprise is not how many are selfishly contrarian but how many wear masks without coercion. The mask is more a help to others than to the wearer, so in a way we could argue that it’s an example of symbiosis. But it’s deeper: a leap of empathy by thinking in the communal and behaving in the fraternal.

Then there are the examples during the lockdown of people delivering food and supplies to the isolated and vulnerable. It’s happened in Canada and internationally. That’s a form of charity, of course; or, if you prefer, organized goodness. But it’s also a profound aspect of empathy. If I may quote the founder of my faith for a moment, “Love your neighbour as yourself.” It’s one of Jesus’s two great commandments, and worth considering. We’re told to expand “self” love into “endless” love. To make a great leap of feeling so as to form a circle of knowing kindness. A projection of grace.

Observe the Black Lives Matter (BLM) phenomenon and the culture it created. Once again, it’s easy to point to the negative, to the violence and the anarchy, but this is tabloid sensationalism rather than a daily norm. What BLM has allowed to appear, and even flourish, is white privilege empathizing with the Black lack of it. We can mock white allies standing in solidarity with the Black community, but all of the intelligent analyses reveal that these people come from every class and background. The empathy may be late in coming, but it has nevertheless come.

READ: ‘The weight of change should not rest on the shoulders of Black people’

We’ve witnessed an enormous growth in environmental consciousness, particularly among younger people. Some dismiss this as cultish and immature, but there is none so tired and banal as a cynical senior. As a father of four children, it’s easy for me to want a safer, better planet for my family. I have an emotional bond with the future. That’s not the case with teenagers. Naturally, there is the appeal of the cause, the thrill of the chase, but there’s more to it than that. These teenagers seem to have an authentic sympatico with something beyond the personal. “But,” their critics say, “they’re all about their feelings.” Yes, in a way they are. That, however, is a good thing. It’s your inability to understand it that’s the problem.

If any nation requires empathy in the coming year, it’s the U.S. It’s a country and a society divided as it hasn’t been since the Civil War, and it would be callow to assume we won’t see violence and discord. But read between the metaphorical lines or, better, above the hysteria and the anger. There are countless examples of people on both sides trying to create alternative relationships. Not—and this is important—to suddenly agree, but to understand how critics feel and think. As my dear friend the author Irshad Manji writes and says so eloquently, when we confront our opponents, do we offer “any hope for redemption?”

Irshad and I, by the way, used to be on television together. We didn’t get along at all. We’re now close and affectionate. Empathy won out. It has that effect, if we make the effort.

This column appears in print in the January 2021 issue of Maclean’s magazine with the headline, “The year of empathy.” Subscribe to the monthly print magazine here.