Opinion: As Justin Trudeau continues to burnish his Superman brand, Andrew Scheer should be driving an election-day contrast with an Avengers-style approach 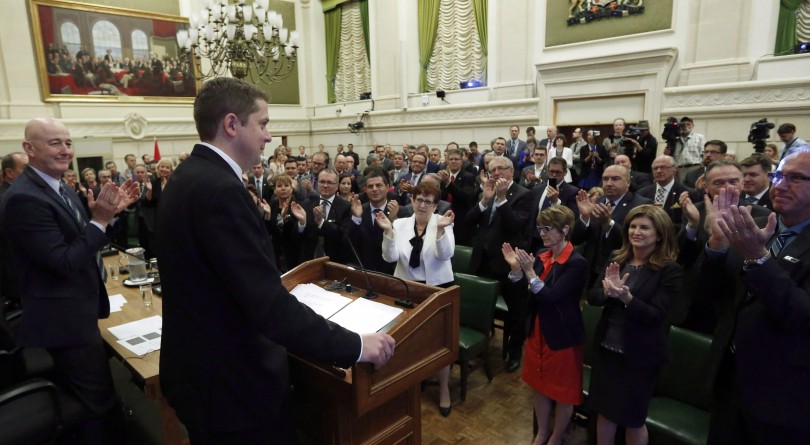 Conservative Party Leader Andrew Scheer receives a standing ovation from his caucus in Ottawa, on May 29, 2017. (Fred Chartrand/CP)

Dennis Matthews is a conservative strategist and commentator who is a vice president at the national communications firm Enterprise Canada. He served as an advertising and marketing advisor to Prime Minister Stephen Harper.

We live in an era of celebrity leaders. For proof, one need only look to the south, where Donald Trump has absorbed the entire popular imagination even as he weathers high-profile court accusations and allegations from a former reality-show contestant. And in Canada, we’ve seen power increasingly become centralized in the Prime Minister’s Office under Justin Trudeau and his predecessor, Stephen Harper, which makes it easier for elections to become personality contests in the style of America’s, rather than a representation of the will of local ridings or a referendum on a party’s ideas, as our parliamentary system was designed for.

That kind of focus makes things easier for the jet-setting Trudeau as the 2019 federal election looms large—and it makes victory a tall task for Andrew Scheer’s Conservatives, when the road back from their 2015 defeat already seemed like a hard one. Trudeau’s omnipresent brand made the magnitude of the Liberal victory feel even bigger, and the Harper years didn’t exactly leave room for a clear and brand-established successor.

The personal challenge the Conservative Party leader faces to become Prime Minister is clear when it contrasted with an international celebrity like Trudeau. Scheer will never be more famous, stronger or more of an iconic brand than his opponent. An Abacus Data poll this summer found only 25 per cent of the population had a positive impression of Scheer, a number that is low because an almost equal amount didn’t have any impression of him at all. This points to lots of room to grow but little time to do it in. Maybe he’s smarter or nicer or more normal—but it’s hard to imagine an election fought on a contrast like that. Put simply, he’s stuck in the Trudeau shadow.

So how does Scheer step out of that shadow with just over a year remaining before election day? By showcasing his team and the broader Tory approach, and continuing his leadership style of making it less “I and me,” and more “us and we.” In a world of authenticity, he can be true to his proven style of leadership and deliver a contrast to Trudeau in the process.

And with celebrity, personal image and individual figures increasingly taking centre stage in our politics, it might only be fitting to use a blockbuster movie analogy to describe the type of campaign that Scheer can win: The Avengers versus Superman.

READ MORE: Conservatives can win if they take aim at Liberal incompetence—not the culture wars

Indeed, it’s a credit to the Tories that we can even talk about a campaign that Scheer can win, given the uphill battle it’ll be to send Trudeau packing after a single term. But they’re essentially tied with the Liberals in the polls and flush with cash in their election war chest, and the Conservatives have a lot of reasons to feel positive.

And so it’s time to build a brand that drives a contrast between the Conservatives and the Liberals—which is ultimately how campaigns are won. During the Harper years, the defining contrast was on his personal leadership. This was partly a product of Harper’s governing style, but also that of his opponents being perceived as indecisive, weak or self-interested. Emphasizing Harper’s leadership helped drive up Tory support during the winning years, even if they helped further the trend of presidentializing Canada’s elections.

When Trudeau arrived on the scene, his personal popularity served as a generational supernova to heroically propel his party from third-place to power. And while it’s hard to imagine a bigger contrast in individual personalities and governing styles between the Harper and Trudeau administrations, they share one same quality: the public sees them as one-man bands. That’s not to say there isn’t a supporting cast—it’s simply that they don’t play a big role at the ballot box.

Scheer now needs to change that. Just because past elections have been fought as a presidential race doesn’t mean the 2019 campaign needs to be one. How you frame an election for the public is a choice that campaigns make, and it’s made in everything from the events you hold to the literature dropped at doors and the advertisements you produce. Elections can very much be about issues, values or even the team of people who will tackle the challenges of our time.

Scheer is well-placed to do this. He’s already been a respected Speaker of the House, where he bridged differences, sat in a leadership position, and allowed others to shine while commanding respect and authority. And while it’s certainly not as dramatic as Abraham Lincoln’s team of rivals, the people that make up his front bench are a mixture of supporters, independent actors and one-time rivals. By letting them shine and spread the Conservative word, he’s broadening the depth and reach of the Tory message every day.

This approach isn’t without its challenges or pitfalls. It’s been an awkward summer for Scheer as he dealt with the ego and bitterness of one-time rival Maxime Bernier who went from being off-script to deliberately combative. The latitude Scheer gave Bernier to disagree with party policy while still being part of the team was admirable until his then-colleague took it too far—and now, Bernier’s quit the Conservatives, to start his own splinter party.

READ MORE: Why Bernier is leaving the Conservative Party

But where the strategy really works is seeing star MPs like Pierre Poilievre and Michelle Rempel hold their respective ministers to the fire on the carbon tax and illegal border crossings, or watching frontbenchers like Gérard Deltell, Candice Bergen and Erin O’Toole cut through the clutter and sell the team message. Many Tory MPs boast a strong social media presence too, while also understanding how to get covered in the traditional media and representing different kinds of voters in the broader conservative coalition. It’s a stronger team than most Opposition leaders have been blessed with.

Marketing a team during an election isn’t just an academic theory either. Towards the end of the Ontario PCs’ victory, a pivot to showcasing the broader potential cabinet helped Doug Ford seal the deal in his campaign with some voters weary of him personally. By holding candidate roundtables with his star candidates in the final days of the campaign, he sent strong signals to swing voters who would be in his cabinet and what his government would be like. Even looking back to the 1990s and 2000s it’s worth remembering Liberal campaigns focused on a Red Book, not the personality of the leader. And Paul Martin cultivated his own following with fiscally minded voters, even though they knew Jean Chrétien would be Prime Minister.

As the Conservatives debate policy at a convention in Halifax and ultimately finish their platform, it’s possible to imagine a manifesto that narrows in on key voter concerns while having a team that voters can imagine actually implementing that plan front-and-centre. That’s to the party’s advantage.

Between now and election day there will certainly be moments where Scheer will stand alone. After all, Canadians have begun to see elections as the hiring of a Prime Minister, and there’s just one spot per party on those national debate stages. It’s during those moments that he’ll face a choice: whether to pursue a strong solo brand, or be seen as a leader of a team that isn’t just in his shadow.

But when he makes that choice, he should know that Trudeau has the solo-brand question locked down. After all, he’s famous, relatively popular, and he can suck the oxygen out of an opponent through his ubiquitous social media and traditional media presence. In case he hasn’t made it clear enough, he’s even dressed like Superman for Halloween. He is the Liberal brand, and the Liberal brand is him—and it’s why Scheer will need his team of Avengers to take him down.