It's time for Andrew Scheer to get serious

Stephen Maher: With his base-pleasing attacks on the carbon tax, the Conservative leader is misleading Canadians about the most important issue we face 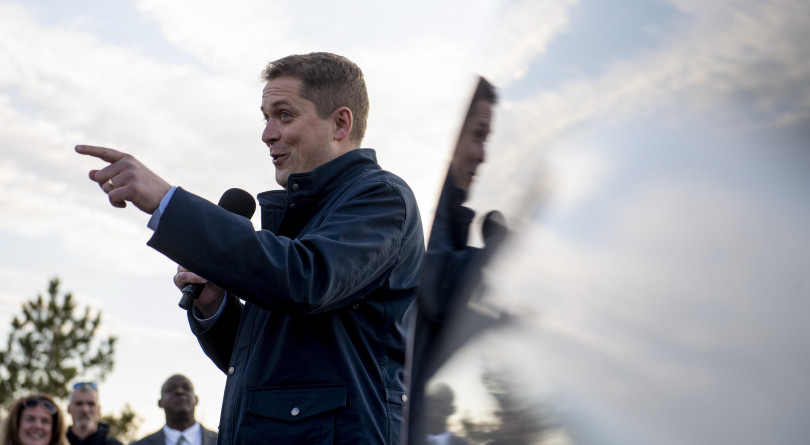 Scheer speaks to supporters before a door knocking event for volunteers in the Kanata suburb of Ottawa on Thursday, April 25, 2019. (Justin Tang/CP)

There are many lines of attack open to Andrew Scheer as he seeks to replace Justin Trudeau as Prime Minister in October.

Scheer can say that Trudeau is an incompetent tax-and-spend Liberal, a virtue-signalling spokesmodel in an empty suit, a trust fund kid who looks after his rich buddies but doesn’t do much for everyday people struggling to pay their bills. Scheer can say that Trudeau lied to Canadians about interfering in the prosecution of SNC Lavalin, about electoral reform, about the size of the deficits he planned to run.

He can say that Trudeau foolishly killed two pipelines that would have got Alberta oil to tidewater, bungled the approvals process for the only remaining project, and is changing the law to make it hard for anyone to ever build anything, which has driven away international investors.

He can say that Trudeau has messed up our relationship with our biggest trading partners, that he has been too busy preening for international media to look after business, and Canadian workers and farmers are paying for his failures.

Scheer can make a pretty good case that it’s time to replace Trudeau with a mild-mannered moderate in touch with the values of suburban moms and dads, the people who, as Stephen Harper used to say, “work hard, pay their taxes and play by the rules.”

What Scheer can’t say, if he wants to be taken seriously, is that Trudeau’s job-killing carbon tax is going to destroy our economy and do nothing to help the environment. That’s not true, no matter how often he says it, and it is going to be hard to listen to him respectfully if he wants to build his campaign around a false premise.

READ MORE: Andrew Scheer’s parents were frugal, but he grew up solidly middle-class

Scheer is like a Chevy salesman telling you that you shouldn’t buy a Ford because the Ford will give your family smallpox. It’s not just wrong. It’s a weird thing to say. We have put so much carbon and similar gases in the atmosphere, from burning coal and oil, that the sky and sea are getting too hot. The ocean is acidifying. Glaciers are melting. Storms, floods and fires are getting worse. Species are dying off. This is not a theory. It is happening. We have to make big changes, soon, but we are not doing it.

Half of the carbon we have poured into the atmosphere has been put there since Seinfeld premiered, as David Wallace-Wells points out in his terrifying book, The Uninhabitable Earth. We have been fouling our nest with full knowledge of the consequences. The ghost of climate future is so awful—a world of suffering and loss, with increasing crime, war, terrorism and mental illness—that the scientists who work on the issue have to be treated for depression.

The good news is that if we reduce our emissions, the process will slow and the climate should stabilize while Miami is above the water and Calcutta is still habitable. The bad news is that a lot of people agree that someone should do something about it, so long as it is not them.

Canadians are among the largest polluters in the world: our per capita emissions are the highest among the top global 10 emitters. Saskatchewan and Alberta are the worst, mostly because the oil there has to be boiled out of tar, which burns a lot of carbon, but also because they produce electricity by burning coal.

As we saw in the recent Alberta election, voters who see their financial destiny linked with boiling oil out of tar are ready to hear that their economic problems are caused by Trudeau’s carbon tax and the lack of pipeline capacity, rather than the flood of cheaper American oil from fracking, the real source of economic pain in the oil patch.

Jason Kenney, Andrew Scheer and Doug Ford have all put opposition to the carbon tax at the heart of their campaigns, benefiting from grass roots sentiment among Canadian conservatives.

Michael Chong, who ran on a pro-carbon-tax platform for the Conservative leadership, was often booed at debates. Ford’s anti-carbon-tax position was obviously more popular than Christine Elliott’s position in the Ontario leadership race, because she flip-flopped under pressure.

But just because a lot of Canadian conservatives think a carbon tax is bad doesn’t mean they are right. They are wrong. It is good policy, likely the best that is politically possible. It is a tax on consumer carbon emissions—$20 a tonne for now, rising to $50 a tonne by 2022—with negotiated levies on big industrial emitters, since there is no point imposing high fees on an Ontario factory if it can just move to some uncivilized place, like Michigan, where there is no price on carbon.

It is not a tax grab. It’s a tax shift. The Liberals are going to rebate the revenue raised with direct payments to families. Last week, the parliamentary budget officer released a report showing that only the richest 20 per cent of Canadians will pay more carbon tax than they will get in rebates,  because they pollute more, driving big vehicles and living in big houses and so on.

The Conservatives could be criticizing the rebates, arguing that it would make more sense to just cut income taxes across the board, and arguing that Trudeau is doing the whole thing wrong. Instead, Scheer is pretending that the rebates don’t exist, and complaining that the tax doesn’t apply to big emitters, which is also dishonest, because they are being taxed through a separate program. (There is some merit to the argument that the loopholes on these fees are too big.)

Finally, Scheer is saying the measure will do nothing for the environment, which is nonsense, as anyone who has ever looked at a supply and demand graph can tell you. Scheer is misleading Canadians about the most important issue we face, to discredit a policy that offers the best chance of reducing emissions.

Smug Canada, which thinks of itself as a world leader, is a failure on climate. For decades, under Liberal and Conservative governments, we have promised to cut emissions but failed to do the politically difficult work required. Since 1989, the year the United Nations first warned of the dire consequences of carbon emissions, Canada’s per capita emissions have declined only slightly, from 16.9 to 15.6 tons per person.

In 1991, Sweden imposed a carbon tax, which is now the highest in the world at $186 a ton. Its emissions have declined from 7.5 to 4.2 per person. Sweden and the other nordic countries have been able to impose a price on carbon because public trust in politicians is high. Voters believe that government is honest. In Australia and Canada, conservative politicians have been able to convince mistrustful voters that the whole thing is a scam.

Trudeau’s scheme is an organized, sensible first step to change that, creating a mechanism that will begin to bring down our emissions. Critics in the NDP and Greens can complain that he is not doing enough, but it’s hard to look at recent provincial elections and concluded that voters want stronger policy.

Scheer, on the other hand, has delayed his policy. This week, his office sent Conservative MPs talking points warning them not to say if the party will try to meet targets the world agreed on in Paris. Last week, the Globe and Mail reported that Scheer spent a day at a retreat south of Calgary with a number of oil patch executives who want the rest of us to spend more celebrating their miraculous industry and less time trying to reduce emissions.

Also present was Mark Roman, who used to lead the Koch brothers’ secretive and powerful intelligence gathering entity before he went on to work for Donald Trump. Conservative Party lawyer Arthur Hamilton, who is suing Greenpeace on behalf of a forestry company they criticized, spoke alongside Roman.

Scheer is likely under pressure to adopt the confrontational tone that Kenney embraced during the Alberta election, attacking environmentalists as traitors and suing them when they criticize their betters in the corporate offices of oil companies.

This view of the world, while it may win votes in the oil patch, does not reflect the centre of Canadian public opinion, or even the oil patch, where most executives understand that they will pay a price on carbon.

Scheer, like Conservative leaders before him, is caught between his base, which is full of people who would like him to send David Suzuki to Guantanamo Bay, and suburban voters in Ontario and British Columbia, who want a government with a climate plan.

So far, he is more concerned with feeding his base than extending his appeal. That is likely because, in spite of enormous recent failures by Trudeau, Scheer is still struggling to rally Conservatives behind him. Much of his party lives in a fantasy world, where the only problem with Canada’s oil industry is its critics, emissions are all somebody else’s fault and everyone should be able to pollute as much as they like.

If Scheer lets those people write his policy he shouldn’t expect to be treated seriously.