It's too late for civility in American politics

Opinion: Even as people fight for human rights, calls for civility amid public protests of Trump staffers in their private lives feel like little more than appeasement 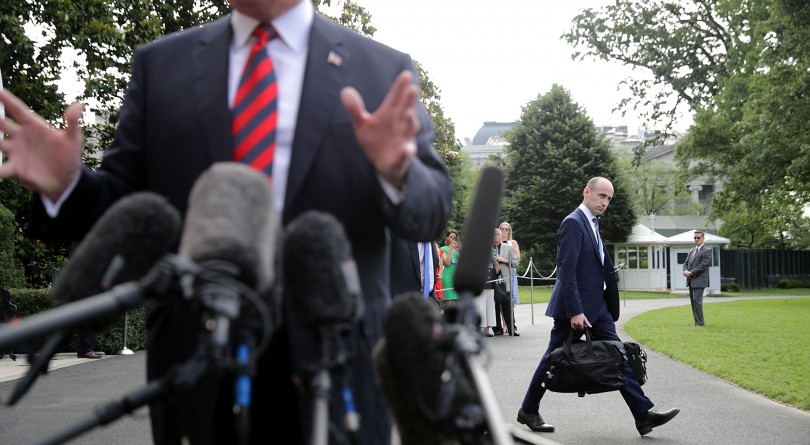 Stephen Miller, a senior advisor to the President (right), walks behind U.S. President Donald Trump as he talks to reporters before they depart the White House June 8, 2018 in Washington, D.C. (Chip Somodevilla/Getty Images)

What a difficult life it must be, living in Washington, D.C., and collecting a paycheque from Donald Trump’s administration. Sure, there are the six-figure salaries, and the manifold perks that come with power. And, of course, there’s the endless opportunity for upward mobility that comes with high staff turnover. But given the lack of civility in politics of late, one might be forgiven for wondering what point there is in stifling one’s conscience and sense of accountability to lie to the American people, if you can’t get a date or even dine out in peace.

For all of the power the Trump administration has been able to exercise in ripping apart some families and detaining others indefinitely, it is apparently overmatched by the indignity of being made uncomfortable in public.

First there was Kirstjen Nielsen, the secretary of homeland security whose quiet work dinner at MXDC Cocina Mexicana, a Mexican restaurant, was rudely interrupted by a mob of hecklers. Only a few days prior, Nielsen delivered a shockingly deceitful press conference, denying that Customs and Border Protection was separating children from their parents in order to deter future asylum-seekers, something that John Kelly, her predecessor and Trump’s current chief of staff, had long since affirmed was the case. Nielsen later tweeted: “We do not have a policy of separating families at the border. Period.” While the tweet was true, in the sense that no official U.S. policy existed to rip children out of their parents’ arms and shuttle them into foster care, it was happening nonetheless to mostly Mexican families. For that, Nielsen—who must have been famished after days spent catapulting her employer’s propaganda—was chased from her fancy table by an angry crowd chanting “shame” behind her.

The avalanche only continued from there. Stephen Miller, a senior policy advisor and professional troll that many have pointed to as the architect for Trump’s immigration stances, was spotted at Espita Mezcaleria the following day. As Miller was browsing the menu, another patron noticed him and shouted, “Hey look guys, whoever thought we’d be in a restaurant with a real-life fascist begging [for] money for new cages?” Miller—whose cell phone number had already been published on the Gawker successor site Splinter—did not leave the restaurant, but was doubtless put off by the encounter. This is, it can no doubt be argued, the least tolerable outcome in a democracy.

Then, over the weekend, White House press secretary Sarah Huckabee Sanders was asked to leave the Red Hen Restaurant in Lexington, Va., drawing comparisons to the rampant segregation at restaurants and lunch counters before the Civil Rights Act was passed in 1964. And according to a story from Politico, outing oneself as a Trump staffer has apparently proven to be a surefire way to get rejected on dating apps in D.C.

In response, some members of the media and political establishment have responded with an emphatic call for civility. While we can debate the humanity of holding the children of asylum-seekers hostage until their parents withdraw their claims, they say, what we cannot do in the meantime is deny selfies to the members of Congress who’ve rolled over and let this happen.

According to Very Serious People like David Gergen, the coarsening of late by Americans who oppose the Trump administration’s bigoted principles represents an unprecedented fracturing of the discourse. Yet the Supreme Court just ruled in favour of Trump’s Muslim ban, granting the President broad powers to exclude entire categories and nationalities of people from American soil. Earlier this month, the Supreme Court of the United States ruled that the Masterpiece Cake Shop in Colorado had been unfairly sanctioned for its refusal to make a cake for the wedding of a same-sex couple because the shop owner’s religious beliefs forbade him from using his talents toward creating products that he deemed objectionable. And just this week, the nation’s highest court struck down an opinion from the Washington state Supreme Court, which had previously ruled that a flower shop which refused to provide service for a same-sex couple had violated the state’s anti-discrimination law.

Some American conservatives have long agitated to deny others their rights, from women seeking birth control, to same sex-couples seeking to get married, and to transgender women seeking the basic dignity of using the bathroom unaccosted. Former Arkansas governor Mike Huckabee calls the Red Hen’s treatment of his daughter “bigotry,” yet cheers when a same-sex couple is denied a marriage license. And yet, in the name of civility—which must take priority over other people’s basic human rights if we want to keep reasonable discourse alive—we must not cause discomfort to the handmaidens of fascism. Sanders’s braveness in the face of Americans fed up with this bigoted and shameless administration was no less than a modern-day version of the Woolworth’s lunch counter sit-ins.

The call to civility, at this stage of the game, amounts to little more than the appeasement of fascists in the vain hope they will learn to treat others as human, even as they drag America backwards to the Reconstruction era. It forces people who face discrimination simply for who they are to fight against two struggles: Not only do they have to call for their humanity to be respected by political movements dedicated to denying it from them, but they also have to sidestep the enablers, many of whom drape over themselves the reasonable label of “moderates,” who view any principled anger from their side as unhinged fanaticism.

The hallmark of the modern white moderate is to invoke Martin Luther King Jr. when it suits the purpose of cowing Black folks and other people of colour to behave more politely. And yet, King recognized their version of “civility” to be a death sentence. “The Negro’s great stumbling block in the stride toward freedom is not the White Citizen’s Council-er or the Ku Klux Klanner,” King wrote in his Letter from Birmingham Jail, “but the white moderate who is more devoted to ‘order’ than to justice; who prefers a negative peace which is the absence of tension to a positive peace which is the presence of justice; who constantly says ‘I agree with you in the goal you seek, but I can’t agree with your methods of direct action.’ ”

As King warned, the white moderate will, at every moral crossroads, place themselves between the oppressors and the oppressed, to demand all conversations be conducted with inside voices while they sketch out the timetable for other people’s freedoms. And now, these moderates would deny that the rest of us even have the right to judge the Trump administration by the rotten content of their character.

It’s no accident that Donald Trump can call migrants from the global south “animals” who are attempting to “invade” and “infest” America, but comedians who call out his administration are the ones deemed to have crossed a line. It’s no accident that Corey Lewandowski, Trump’s former campaign manager, can mock a 10-year-old child with special needs being separated from her mother, and be invited to appear on CNN only days later. This, after all, is how the discourse on “civility” is designed to function. Nothing is expected from the side that caters to the hearts of bigots; they are free to inflict cruelty on others and laugh at their pain. But the side that exercises compassion and an interest in human rights is held to a righteous, pious standard that leaves them no room to express their anguish and frustrations at the people who would do them harm. Disagree with bigots, if you must—but holding them personally accountable is not how things are done in a polite society.

READ MORE: The slippery slope of dehumanizing any group of people as ‘animals’

This is nothing new. Back when abolitionists were raining shame and hellfire on slaveholders prior to the 1860 election, Abraham Lincoln attempted to appease both sides by turning a blind eye to slavery in the south, as long as its spread could be prevented in the northern territories. And in 1934, while Nazis were consolidating their power in Germany, pacifist and social justice activist Henry Cadbury beseeched the good Jewish people to avoid resisting, in the hopes the world would see Hitler’s barbarism for what it was. “By hating Hitler and trying to fight back, Jews are only increasing the severity of his policies against them,” Cadbury said to the Conference of American Rabbis.

History has never been kind to the misguided belief that people who wish to trample on human rights can be appeased. And while we may be a long way from anything resembling armed revolt, the right of free people to speak out against fascists and dissociate from them is not up for debate. Sarah Huckabee Sanders can surely shake off the unpleasant experience of being denied a nice night out, especially given she can go to bed at night knowing where her children are. Trump staffers who can’t get laid may, one day, find their humanity again. And life will go on for them, as if none of this unpleasantness ever happened.

But it’s possible that thousands of parents may never see their children again, since the Trump administration has no plans for reuniting the families they violently ripped apart, and given its validation by the highest court in the land, shows no signs of slowing down its bigoted public policy agenda. If that doesn’t at least earn scorn, ridicule, and social shunning, then I would ask those who call for “civility” what they would suggest at this point. Because no one, not even their dead heroes or the murdered leaders they’re so fond of quoting, earned their humanity by asking politely.