Tom Parkin: The NDP leader said he'd never prop up a Conservative government. It was the right thing to do—and a play that will strengthen his hand. 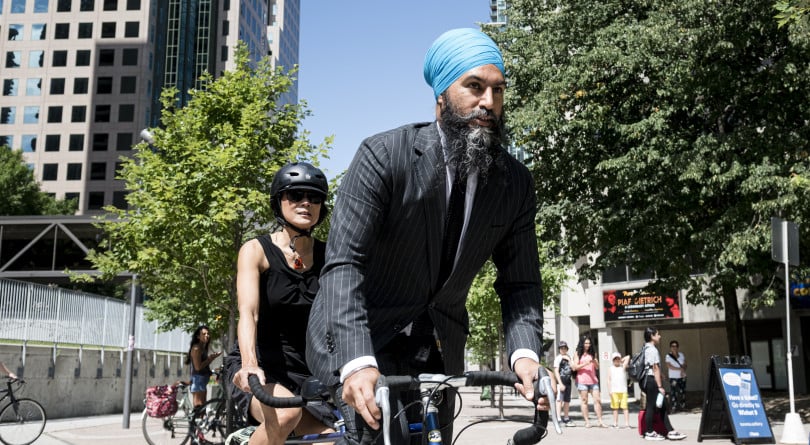 Singh and former NDP MP Olivia Chow arrive at the Jack Layton Statue on the anniversary of his death, in Toronto on Aug. 22, 2019 (THE CANADIAN PRESS/Christopher Katsarov)

Often in politics, you’re condemned to play the cards you’re dealt. But last week, NDP leader Jagmeet Singh turned down a hand and dealt himself a new one.

When an old video surfaced of Conservative leader Andrew Scheer speaking in opposition to same-sex marriage, Singh condemned Scheer for “disgusting prejudice.” Then he reached for his new cards. If this fall’s election results in a minority parliament, his New Democrats would never help Scheer become prime minister, Singh vowed.

Singh’s new play has been criticized by Green Party leader Elizabeth May, who has said she could support Scheer—if he gives her what she needs on environmental issues. May counter-argues that playing against two bidders raises the price of support. But that’s a misread of power dynamics.

There is no deal to be had between social democrats and conservatives. Singh’s positions on abortion and LGBTQ+ rights are clear. Scheer’s are at best very suspect. Singh wants to expand medicare and build housing. Scheer wants to cut taxes and shrink government. Singh wants a green new deal to create jobs and cut carbon. Scheer wants to end carbon pricing and his climate policy includes no projection of its carbon impact.

There is nothing in Scheer’s conservative hand that plays on the cards Singh holds. And without negotiations based on mutual gains, the only basis of a deal would be in sacrificing people’s rights to Scheer’s executive power. The power to enforce the Canada Health Act. The power to fund lobby groups. The power to appoint judges. The power to prorogue. None are subject to the Commons.

READ MORE: What the first ads say about the election campaign

The threat to walk down the hall and cut a deal with the Conservatives is a bluff—and everyone at the table knows it. When everyone knows it, there is no leverage. So Singh has turned it down.

Probably nothing unifies social democrats more than antipathy toward Conservatives. Scheer’s party wants to pull-down everything Singh’s social democrats want to build up. But it’s more than that. It’s personal. Scheer threatens to hurt the people who are part of the social democratic electoral coalition. Singh’s no-deal stance makes him the unambiguous defender and unifier of that coalition. And that clear anti-Scheer positions contrasts well.

Singh’s NDP can remind Canadians how, in the last minority, Liberals chose to prop-up Harper rather than work with New Democrats. After the 2008 election, the Liberals and NDP inked a coalition deal to oust the Harper minority. Then Harper prorogued, the Liberals switched leaders—and backed out of the coalition deal. When he recalled the Commons and tabled a new budget, Liberals propped-up Harper, as they did for most of the next two years.

New Democrats can’t be naïve about the nature of the Liberal Party. The Trudeau majority has amply proven that, left to find their own habitat, Liberals migrate to corporate boardrooms where they devour just about anything the lobbyists’ ample load of fertilizer will grow. On that point, Liberals are no different than the Conservatives.

What is different is the NDP can leverage the Liberals because of their common interest in a key electoral demographic: Liberal voters who like NDP proposals. Canadians have benefitted from this NDP leverage, resulting in in universal health care, public pensions, foreign investment review and host of other reforms federally and provincially across Canada.

And in this campaign, Singh starts with some strength. Polls repeatedly find universal pharmacare, green new deal and higher taxes on the very wealthy are popular. Singh has strongly advanced these proposals while Trudeau’s record on them is weak.

But the challenge for Singh’s NDP is to drive Trudeau off his constant comparisons with Scheer into a comparison with his popular proposals. Singh’s no-Scheer stance opens a way. Singh has declared Scheer is unacceptable. That’s something Liberals and New Democrat voters can widely agree on.

Despite that, the core of Trudeau’s campaign is about comparing himself to someone unacceptable—and finding his weak record is better than not unacceptable. What a dispiriting, small campaign concept for a great, aspiring country. In 2015, Trudeau campaigned on “better is always possible.” By 2019 he’s just possibly better than unacceptable.

If Scheer is just unacceptable, New Democrats can demand the comparison voters deserve—between Trudeau’s record and Singh’s proposals. That’s not just a win for Singh, it’s a win for Canadians.