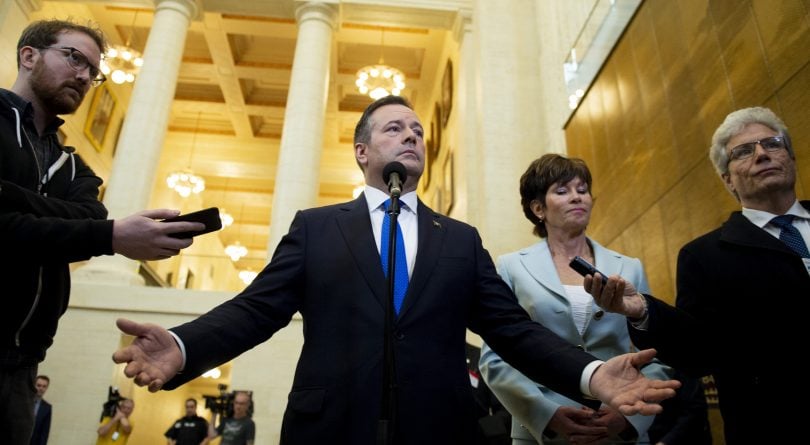 Alberta Premier Jason Kenney reacts to a question as he speaks to reporters after appearing at the Standing Senate Committee on Energy, the Environment and Natural Resources on May 2, 2019. (CP/Justin Tang)

It’s been a tough few years for Ezra Levant. Rebel Media, his far-right website that trades predominantly in anti-Muslim content and attacks on progressive politics and politicians, nearly collapsed in 2017 after one of its biggest stars, Faith Goldy, got conspicuously chummy with neo-Nazis and white nationalists at the “Unite the Right” rally in Charlottesville. One of his co-founders quit, along with a handful of mainstream contributors, and the conservative politicans (like Andrew Scheer) that had once been happy to talk to Levant and other Rebel Media personalities were suddenly disavowing him publicly. Levant tried to revive the brand by hitching his wagon to British anti-Islam activists like Stephen Yaxley-Lennon and Katie Hopkins, but his brand remains toxic among conservative politicians in Canada.

His ideas, on the other hand, are a whole different story. “Ethical Oil,” his 2010 paean to Canada’s energy sector, has always been popular in certain circles in Calgary. But it’s never before been given the official sanction of the Premier’s office—at least, until Jason Kenney took control of it. And while Kenney and Levant have disavowed each other publicly, Alberta’s Premier has been enthusiastically breathing new life into Ethical Oil’s core argument, which is that Alberta’s oil and gas resources deserve preferential treatment in global markets because of Canada’s superior environmental and human rights record when compared to places like Saudi Arabia, Iran, and Russia.

Premier Kenney’s five-page open letter to the Canadian head of Amnesty International represents perhaps the highest profile example of Ethical Oil’s renewed prominence. In it, he chastises the organization for its own open letter in which it raised concerns about the impact of Alberta’s new “fight back strategy” on human rights in the province, and suggests it was giving comfort to the real enemies of freedom. “There was a reason I singled Russia, Saudi Arabia, and Venezuela for comparison,” Kenney writes. “They–along with Iran–would be major beneficiaries of a moratorium on Canadian oil production. No one will cheer your letter harder than Vladimir Putin, the Houses of Saud and Al Thani, the caudillo Nicolás Maduro, and Ayatollah Ali Khamenei.”

MORE: What happens when the demand for Alberta oil goes away?

This is straight out of the pages of Levant’s book. The problem is that these words, like Levant’s book, misunderstand the nature of the challenge facing the industry they ostensibly seek to defend. Yes, this sort of rhetorical swordplay will thrill Kenney’s voters in Alberta, but it doesn’t actually address any of the challenges that their province’s oil and gas industry faces.

Indigenous communities in British Columbia are far less interested in the environmental or ethical record of places like Saudi Arabia and Russia than they are of Canada’s, a place that has–to put it mildly–not always treated them with the respect or dignity that they deserve. It probably doesn’t help on that front when the Premier of Alberta refers to them in his letter as “the first custodians of our rich trove of natural resources,” rather than describing them as communities with the ability to say both ‘yes’ and ‘no’ to their development.

The people in Vancouver or Victoria who oppose projects like the Trans Mountain pipeline expansion also don’t hold their own government to the same standards as foreign autocracies and kleptocracies. As such, it shouldn’t be too surprising that they’re utterly unmoved by efforts to win them over with such a comparison. And while those cities are filled with people who happily choose ethically-produced consumer products (and pay a premium for the privilege), the attempts to draw a parallel there to the energy they consume are bound to fall flat. After all, there’s no way right now for them to express a consumer privilege for gasoline produced from Canadian oil at the pump—and even if they could, Canadian oil would be the only choice most people would have.

Jason Kenney is right to champion the industry’s progress on environmental issues and emissions reductions. And Jason Kenney isn’t wrong about the fact that, all other things being equal, the world would be better off if more of its oil and gas came from Canada rather than OPEC and Russia. But all other things aren’t equal.

The world holds Canada to a higher standard than Iran, Saudi Arabia, or Russia, and it’s a standard that most Canadians are happy to live up to. There’s also an obvious irony in a politician championing the rule of law and the constitutional freedoms that make Canadian oil more ethical, only to turn around and fund both a war room and public inquiry that could potentially undermine or even abrogate them.

Rather than comparing itself to some of the most depraved regimes in the world, Alberta should be doubling down on the policies and programs that can help its oil and gas industry continue to reduce its carbon footprint. It should be trying to raise the bar in Alberta rather than pointing out how much lower it is in other places. And it should remember that its own environmental responsibilities go beyond recycling old arguments that didn’t work the first time.