Opinion: As files pile up amid an allegation of groping, the Prime Minister heads to Belgium—with journalists in tow. An ex-Harper communications director offers advice 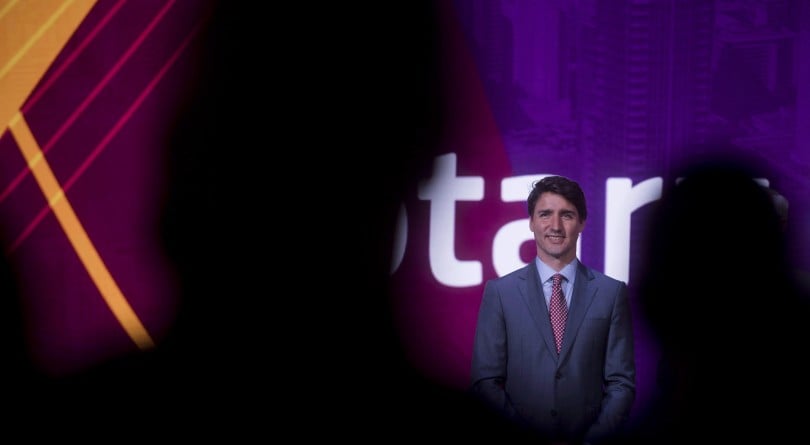 A critical NATO summit lies a week distant. Donald Trump, the volatile U.S. President with whom you’re locked in an escalating war on trade, is now sending caustic letters about your defence spending, or lack thereof. Even worse, the mad tweeter has a point, a fact Trump will surely moan about when he meets with Vladimir Putin—the man who wants NATO to die—without notetakers present.

Meanwhile, Ontario Premier Doug Ford is revoking the province’s cap-and-trade regulation, putting your vaunted pan-Canadian climate change framework at risk. The auto industry is panicking at the prospect of Trump’s musings of new tariffs. The Kinder Morgan pipeline is missing precious months of summer construction time, despite being in federal hands. And you’ve just lost a seat in Quebec to the opposition Conservatives in a by-election.

Oh, and then there’s the small matter of an 18-year old allegation of “groping”—the so-called “Kokanee Grope” —coming to a boil in the press, including with members of the heretofore glowing international press corps, threatening your hard-won reputation as the world’s top feminist.

Now for the best part. After keeping a low media profile in the weeks since Trump’s damaging G7 freakout, you’re about to lock yourself into a plane to head to NATO HQ in Belgium with a pack of parliamentary journalists who haven’t had a chance to ask you much about any of this, especially the “groping” bit.

Having been trapped in RCAF 001 with frothing Ottawa journos on countless occasions myself, I know the immense size of the challenge facing Trudeau’s communications team. Daunting doesn’t begin to cover it. It’s one thing to play prime ministerial keep-away at home; it’s another to play it on the road, with journalists who pride themselves on their toughness and fearlessness—and whose outlets have also, by the way, paid your office thousands of dollars for the pleasure of your company.

There will be no room on the road for Trudeau to duck the grope. He faces legitimate questions as to what happened in 2000, his vague responses to it, and his apparent double-standards on treating credible allegations, along with his credibility as a feminist. Trudeau will have to take the press on. But how?

The closest parallel to Trudeau’s current communications predicament I can draw from my own time serving Stephen Harper is when we travelled to South America for bilateral meetings and the Pacific Alliance summit the week after Nigel Wright’s resignation at the apex of the Duffy hysteria.

While foreign trips usually produced good coverage, a bilateral with Peru and the meeting of a minor group wasn’t going to cut it. It was going to be all Duffy, all of the time. And while we tried to address the issue obliquely before leaving by having the prime minister speak to caucus about it with the press in the room, the press weren’t allowed any questions, and so it wasn’t until we answered their queries in Colombia that we regained a teeny-tiny modicum of control over the issue. And so it will be for Trudeau and his “groping.”

Like Harper, Trudeau has tried to lance the boil pre-trip by allowing a single question about the alleged groping at a Canada Day event in Regina, in which he largely echoed his office’s response that he didn’t remember any “negative interactions” on that day “at all.” But the question wasn’t from a gallery journalist, and there weren’t any follow-ups allowed, despite his statement provoking many avenues for follows. The flurry of stories since his comments are proof that more questions are to come.

Given that Trudeau came to office on a pledge of holding himself to a higher standard than Harper on, well, everything—especially when it comes to the press—I’m sure we can expect a fulsome engagement with the fourth estate next week including, as Harper did in South America, taking questions from every single travelling journalist at a press conference (which were all about Duffy, in case there was any doubt).

If Trudeau doesn’t want to enter the shooting gallery completely empty-handed, he has a handful of options, or some combination thereof. One, he can avoid the press entirely. Two, he can cower the press using warnings on probity (i.e. that it’s gutter journalism to pursue the allegation) or by threatening future access to his office (i.e. ‘no scoops for you’). Three, he can release a more detailed statement in response to the allegation. Four, he can conduct a strictly-negotiated one-on-one with a preferred media outlet, preferably one with a large female audience. Or five, he can throw a dead cat on the table and hope people ask about that instead.

Each option comes with risks. Avoiding the press only invites process stories about avoiding the press, along with mentions of why. Journalists don’t respond well to threats. A statement that expands on Trudeau’s previous non-explanation would only invite more questions (e.g. why have you changed your story?), while one that didn’t would invite a similar number. And a female-friendly outlet might be hard to find in this case; to wit, the folks at Flare have taken the Prime Minister to task over his handling of the matter.

That leaves the dead cat, which is easily Trudeau’s best option. While there is already a heady mix of askable news out there, Trudeau could throw something else out there to further sweeten the news pot. A cabinet shuffle? Some more tough talk on Trump? Nah. On second thought, a dead cat probably won’t cut it either.

But don’t fret, Liberals—there is another way forward. If I were Trudeau’s consigliere, I would recommend the ultimate high-risk, high-reward play: the announcement of an independent third-party investigation into the groping allegation. What’s the worry if, as we’ve been told, nothing bad happened? Announcing an investigation would let Trudeau respond using process on the trip (e.g. “can’t comment during the investigation”), while using that same process to get to the bottom of what happened. An independent third-party investigation would also put Trudeau on an equal footing with the members of his party who have faced similar circumstances, eliminating the charge of hypocrisy—but it would also put him in firing line should the investigation find his behaviour at fault.

Time is running out. Trudeau should want to get this issue under control before he leaves, lest he gives the gallery journalists something they also crave: symbolism. The NATO summit, after all, is taking place less than 30 km from Waterloo, the battleground where Napoleon’s grip on power collapsed. That a supposedly “negative interaction”-free Trudeau has yet to sanction an investigation into his past behaviour shows us where his worries lie.