Justin Trudeau needs to answer for the Burnaby South insult

Tom Parkin: The PM has warned the next election will be nasty. So why has he said nothing—not even a tweet—about a Liberal candidate's race-based attack? 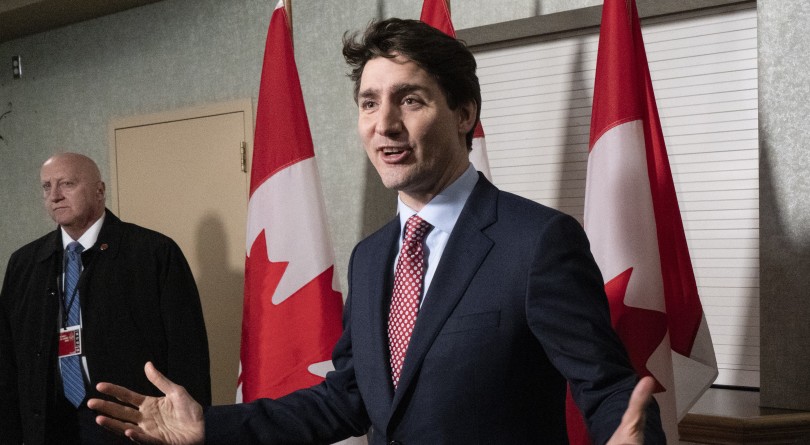 Trudeau arrives for a cabinet meeting in Sherbrooke, Que., on Wednesday, Jan. 16, 2019. (THE CANADIAN PRESS/Paul Chiasson)

Couldn’t even get through the first week.

No, just four days into the Burnaby South by-election the candidate of the Liberal Party—the Liberal Party!—launched a race-based political strategy against NDP leader Jagmeet Singh.

Singh is the first non-white leader of a major political party in Canadian history. He is on his first campaign for a federal seat. So congratulations, Liberal Party, you made history—and not in the way Canadians wanted.

In echoes of the U.S. Republicans’ vile Southern Strategy, Liberal candidate Karen Wang made an explicit “vote for your own kind” pitch, contrasting herself—“the only Chinese candidate”—with “Singh, of Indian descent.”

That an aspirant to the political class would attempt to elevate herself using a strategy of division is the bad news. The good news is the Canadian people. Voters in Burnaby South were about to reject her corrosive political strategy, anyway.

READ MORE: In the Trudeau government, what’s a cabinet shuffle for?

A poll released on the same day her race-based strategy hit front pages showed Wang losing to Singh by a considerable margin. Mainstreet Research put Wang 13 points back, with 26 per cent support. Singh stood at 39 per cent.

And the poll showed Singh with as much support among Chinese-speakers as Wang. According to Statistics Canada, Chinese is the “mother tongue” of almost 36,000 of Burnaby South’s 110,000 residents (only 5,000 count Indian languages as a mother tongue).

So, whatever calculation about race-based political groupthink was in Wang’s mind, clearly most people in Burnaby South have their own thoughts. And being reduced to a passive, two-dimensional identity to be exploited for someone else’s elevation to the political class evidently isn’t one of them.

Wang having set a dumpster fire incinerating the Liberal brand, it seems Liberal operatives did the obvious thing: claim the whole episode had worked out exactly as hoped. One CTV politics host even reported that Liberal strategists were “overjoyed” with their Burnaby South candidate inferno. A National Post columnist asked whether it was “the plan all along to throw the fight?”

While obviously the Liberals want to project confidence that Singh isn’t a real threat with the spin that they are happy to see him elected, that logic implies that somewhere in the Liberal campaign manual is a line of instructions: douse Liberal brand in accelerant, ignite, win. I don’t think so.

But putting convoluted thinking about the benefits of political self-immolation aside, the more important story should be that the Prime Minister himself has said nothing. Nothing.

Only a few months ago, the Prime Minister made headlines pointing at his Conservative opponent and warning the 2019 general election would be “the most divisive and negative and nasty” in Canadian history. Now in the very first electoral outing of this election year, his candidate launched a race-based attack on the first non-white leader of a major political party—and his response has been silence. Not even a tweet.

A statement by a Liberal Party spokesperson failed to denounce the Wang’s strategy. It neither apologized to Singh nor Canadians who so clearly reject the corrosive politics Wang attempted to deploy. Just a blithe sort of shrug.

For his part, Singh has made bringing people together the central theme of his politics. His frequent observation that “once allowed to grow, hate doesn’t pick and choose” is the kind of message that may not resonate inside the Ottawa bubble—but galvanized and united voters on the doorstep in his provincial Brampton riding, where the NDP never had a clue before Singh came along. He now appears to be achieving the same result in Burnaby.

And perhaps the reason is just obvious. Canadians just agree with him. It’s refreshing and relieving to hear a message of social unity from a politician’s lips. We know Canada is not always what it claims to be. But we know the right attitude when we hear it.

This is an election year. And the PM wasn’t wrong to raise alarm bells about a divisive campaign. He now needs to personally set the standard high. And, by the way, taking back Karen Wang doesn’t meet it.

Canadians deserve to hear, from the Prime Minister’s lips and in the strongest possible terms, that he knows we are at a historic election—and any candidate launching a race-based strategy on Singh or anyone else has no future in a modern Canada.

That fact will be obvious to most. But clearly Karen Wang didn’t get it. And still doesn’t.