Andrew MacDougall: The Ontario Liberal leader must switch to preservation mode and try to leave behind something so her successor can rebuild 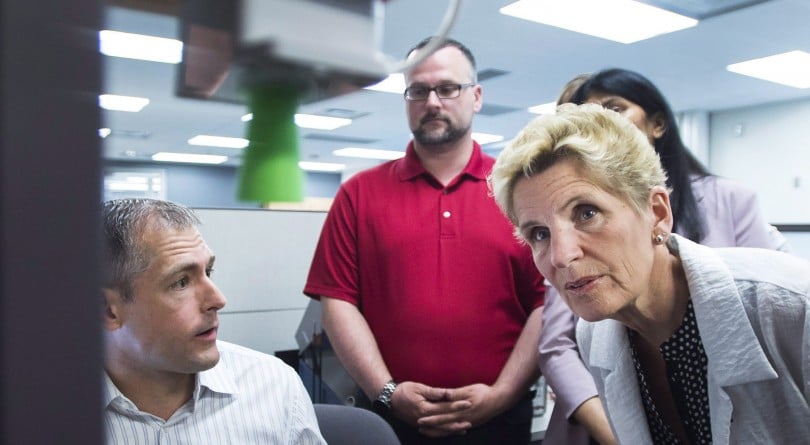 Ontario Liberal leader Kathleen Wynne looks at a sensor at eleven-x during a campaign stop in Waterloo, Ont., on Tuesday, May 15, 2018. (THE CANADIAN PRESS/Nathan Denette)

If the above numerology were that of a gym lock, the Ontario Liberals wouldn’t be bricking it. But the figures are psephological, with the Liberal Party at the tail end of the pack, which means right now it’s raining merde in the Wynne war room.

Yes, campaigns matter, and there’s still plenty of time on the clock, but what to do when you’re a week into a re-election campaign and your party is (still) at the back of the numbers bus? How do you escape a distant third when you’re an incumbent that’s already fired the pre-writ budget and attack ad cannons?

The short answer is: you don’t. You switch instead to preservation mode and try to leave behind something from which your successor can rebuild. This is the task now facing Kathleen Wynne and her Ontario Liberal Party, and they know it.

Not even the most visually-circumscribed Liberal partisan sees a way back. Liberal HQ isn’t Hitler’s bunker, full of fearful advisers insisting to a delusional leader the invading hordes can still be repulsed; it’s chock-a-block with campaign pros who know when they’re beat. Oh sure, Wynne’s advisers still hop around social media like game Black Knights, but rest assured the only group more sombre than David Herle et al. these days is Donald Trump’s legal team.

Not that Wynne’s campaign crew is to blame for the lack of traction; a path to a fifth Liberal term was always going to be narrow (and improbable). But the complete inability of the Liberals to shift the numbers in the first week—one of the few times large numbers of voters tune in—is telling. After 15 years in government voters appear to have made their choice. Or at least ruled out one of three potential choices.

It doesn’t matter that Wynne has performed well in the early debates, or that she has an encyclopedic knowledge of government facts and (its astronomical) figures; the simple fact is the people no longer want what she has to sell. Wynne is Sally Field in inverse: they don’t like her, they really don’t like her.

The taint of Wynne is why the Liberals are now airing a host of election ads sans their leader in places where strong candidates might be able to survive the coming wave. Just why the Liberals chose to highlight a deeply unpopular Wynne so heavily in the opening week will be a legitimate point of debate once the Liberals set about picking up the pieces.

Would more Charles Sousa, or Glenn Thibeault, or…nope, that’s it, that’s all the cabinet members I can name…have made a difference? Probably not, but it would have been worth a shot. A lightning rod for criticism works better when it’s not your leader.

Though it makes Liberal blood curdle, it’s now Doug Ford’s province to lose, with Andrea Horwath and her upstart NDP at the ready to syphon off more and more of the left-of-centre vote. Even if Ford were to morph into, say, an evil reptilian kitten eater from another planet, it’s not likely to send people scrambling into Liberal arms.

The current momentum behind Horwath isn’t all sunshine and lollipops for Team Ford, however. He’d much rather have the left of centre vote evenly split. That’s why the Ford campaign has this week been trying to cool the NDP off with a series of attacks. The Tories need Horwath hot, but not red hot. You’ll know the Tories see a real problem when Ford starts spraying the words “Bob” and “Rae” around liberally.

WATCH: Highlights from the first Ontario leaders debate, in under three minutes

What should help Ford in his quest for left-of-centre balance is that the Liberal fire currently being directed his way will now go toward Horwath. The sound of Liberals (cack-handedly) slagging off the NDP for their budget numbers, as happened this week, is music to Tory ears. They can only hope for more of the same.

It would never ever happen (ever!), but it would be fascinating to see the Liberals call on their supporters to vote for whomever has the best chance of defeating Ford. If the PC leader is really that bad for Ontario’s business, and if the Liberal machine can’t manage to get into gear, it would be the brave thing to do. But we can expect Wynne and her Liberals to fight on to the bitter end.

Solidifying the floor of the Liberal vote matters if a post-election renaissance is to be in the offing. Losing government is itself devastating, but losing it in the manner of Brian Mulroney in 1993 is much, much worse than, say, Stephen Harper c. 2015. Wynne needs to campaign hard to ensure the Liberals aren’t locked out of power for a generation.

It will be a long, hard slog. Even if Liberal voter support doesn’t dip too much from current levels, the red tally could be embarrassingly small come June 7.

How small? 84-38-2. That’s the seat projection (PC/NDP/LIB) based on the current polling average. It’s the kind of uncharted territory that will make seasoned Liberals wish they had been unseated the last time out.