Lethal hatred and life-giving love: A rabbi's prescription against hate 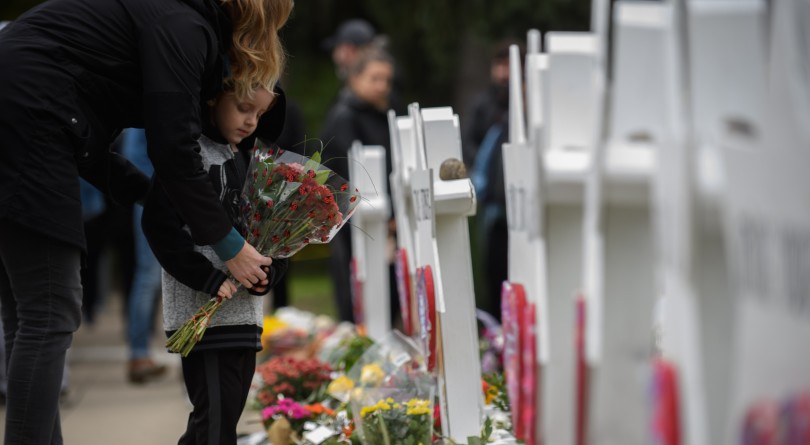 A mother and child place flowers at a memorial for victims of the mass shooting that killed 11 people and wounded 6 at the Tree Of Life Synagogue on October 29, 2018 in Pittsburgh, Pennsylvania. (Jeff Swensen/Getty Images)

Baruch Frydman-Kohl is the Anne and Max Tanenbaum Senior Rabbi of Beth Tzedec Congregation in Toronto.

The late Robert Wistrich described anti-Semitism as the “longest hatred” and a “lethal obsession.” It is pernicious, persistent, and viral. It mutates, even through its own contradictions. Jews have been hated because we were communists and capitalists, cosmopolitan and clannish, elitists and unworthies, different and too similar. Jews once were hated for being weak and stateless; now, Jews are hated because Zionism created a powerful state. Whatever the rationale, the result has been the same: anti-Semitism.

In a climate in which xenophobic attacks have caused deaths in an African-American church in South Carolina, a mosque in Quebec City, and a gurdwara in Wisconsin, it was shocking but not surprising to have white-extremist violence directed against Jews. We had already witnessed, in a climate stoked by extremism masquerading as Islam, or by left-wing anti-colonialism and anti-Zionism, Jews killed in Toulouse, Paris, and Marseilles, following earlier acts of terror in Rome and Istanbul. And on the cusp of the anniversary of Kristallnacht, the 1938 Nazi riots against Jews, Jewish-owned businesses and synagogues, Robert Bowers attacked Jews at prayer in Pittsburgh. “Jews are the children of Satan. There is no #MAGA as long as there is a k–e infestation,” he said, using an epithet for Jewish people in his post on a social network favoured by white nationalists. During the shootout at Tree of Life Congregation, Bowers told police, “They’re committing genocide to my people. I just want to kill Jews.”

Hatred seething at the margins of society has become mainstream in a post-Holocaust world.

What might we do in addition to grieving for the eleven innocents who went to their synagogue to celebrate life, to celebrate Shabbat, and were murdered in the name of hatred? Certainly, we should look for ways to offer condolences to the families of the 11 victims, including Joyce Fienberg, who grew up in Toronto. Some Canadians went to Pittsburgh for the funeral; others will be there during the seven-day mourning period, and more will visit at the end of the first month. Certainly, we should pray for healing for the wounded, including police, and offer financial support for them and the bereaved, as well as for the restoration of the sacred space described by one official as “the worst crime scene I’ve seen.”

But we can do more, in response to such hatred.

READ MORE: Online hate is an infectious virus—and it should be addressed like real-life violence

We must remain vigilant. Review personal and communal security, speak against expressions of hate, and call upon political leaders and media to oppose and marginalize expressions of anti-Semitism, racism, anti-Islamic behaviour and xenophobia.

But beware of allowing fear to overwhelm our society remaining open , with religious institutions as exemplars of welcoming communities. The attack took place on the Sabbath when the synagogue scriptural reading recounted how Abraham and Sarah welcomed strangers. Hospitality is an essential aspect of spiritual life. Keep safety and shelter in balance.

We must stand together. Memorial vigils throughout North America have been heartening expressions of solidarity. Statements from political leaders rejecting hatred and marginalizing anti-semitism have been most welcome. Calls and letters from various faith leaders expressing revulsion at the violation of prayer space and time help to renew a commitment to a society respectful of difference.

Muslims who formed rings of peace around synagogues on the Saturday following the attack demonstrated that the children of Abraham share much in common. Jews and people of other faiths who “showed up on Saturday” declared that terror will not deter us from entering places of spiritual assembly.

We must demonstrate pride in our religious identities. Wear a head covering: a kippah, a turban, a scarf. Place the lights of Sabbath, Diwali, Hanukkah, Kwanzaa and Christmas in your windows. Take time away from work to observe Sabbath or other spiritual times in a non-commercial way. And do not be afraid to do so.

We must respond to hatred with love. Fulfill the Biblical mandate to “love thy neighbour.” Reach out to someone marginalized: a refugee, an individual you haven’t spoken with in a while, perhaps even someone with whom you haven’t gotten along.

Indeed, the Pittsburgh shooter was treated by a medical team, some of whom were Jews. Allegheny General Hospital President Jeffrey J. Cohen lives across from the synagogue and worships there. “I stopped [at the hospital] to see him, I just asked him how he was doing. Was he in pain, and he said no, he was fine,” Cohen told an ABC News affiliate. “He asked me who I was. I said ‘I’m Dr. Cohen, I’m the president of the hospital.’ I turned around and left.”

In these horrible times, I am reminded of the traditions that gird our religious lives. A glass is broken at the conclusion of a Jewish wedding to indicate that even at a time of personal joy, we recall communal tragedy, a symbolic act that emphasizes the importance of memory, even as the couple faces forward to build a future. And when we name a baby in memory of a loved one, we often cry at our loss as we rejoice over the birth. Even in our happiest moments, we hold and acknowledge a space for sadness.