On the Inuktut language, the Inuit may have been too welcoming

Opinion: Inuit have long been nice, writes Aluki Kotierk—but as the Inuktut language dies, it's time to push back against a tilted education system 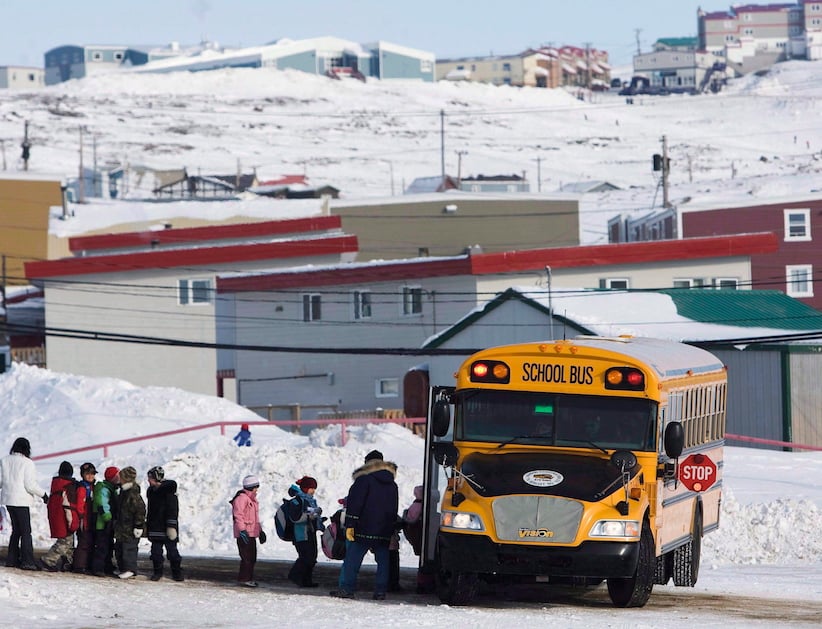 Students board a school bus at the Nakasuk Elementary School in Iqaluit, Nunavut, in a March 30, 2009, file photo. (Nathan Denette/CP)

Aluki Kotierk is the president of Nunavut Tunngavik Inc., and the Inuit signatory to the Nunavut Land Claim, the largest Indigenous land claim in the world, representing one-fifth of Canada. These remarks are adapted from a speech given last week to the Inuit Circumpolar Council Education Summit in Nuuk, Greenland, Feb. 15, 2018.

As Inuit, we pride ourselves on being welcoming. In Nunavut, it is the first principle listed under our Inuit Qaujimajatuqangit (IQ) principles. But more and more I have been wondering: Have we been too welcoming?

Twenty-five years ago, Inuit welcomed Prime Minister Brian Mulroney to Iqaluit to sign the Nunavut Agreement, an agreement recognizing and including our territory into Canada. In turn, we trusted that Canada would welcome our Inuktut language into government services on our lands. We trusted that Canada would welcome Inuit culture and language into schools on our lands.

Maybe our trust was misplaced.

In Nunavut, the majority of the population is Inuit. The majority mother-tongue spoken is Inuktuk, a language that is not an official language of the nation of Canada. Nunavut is the only jurisdiction in Canada that has a homogenous majority language spoken that is a language other than French and English. According to a 2014 report from Nunavut’s department of education, the most recent one available on its website, Nunavut has about 9,300 Inuit students who mostly speak Inuktut as their mother tongue enrolled in our K-to-12 schools. But of the 43 schools across Nunavut, all the schools operate in English, except for one in Iqaluit: it operates in French.

Thirty-seven out of 42 school principals are English-speaking non-Inuit; almost all of them are from southern Canada.

Nunavut is home to about 90 French-speaking students, and 430 English mother-tongue students, mostly non-Inuit; Nunavut has 452 English-speaking teachers, so there are actually more English teachers than there are English students in our schools.

Have we learned no lessons from residential schools, which forbade children from speaking their own language? No wonder 70 per cent of our children do not graduate from this school system. No wonder we are losing our Inuktut language at 1 per cent per year.

Our parents are being punished and not given enough money for food if they don’t ensure their children attend a school system that does not recognize who they are as Inuit: Last month, the government cut off an Inuit family’s food allowance because the daughter wasn’t attending at least 80 per cent of school classes. Our parents get painted as bad parents for not waking up their kids and sending them off to a school where for the most part they will be indoctrinated into English. And if a parent does go into the school to speak to the principal, they will most likely be spoken to in English. Is it any wonder Inuit parents resist sending their kids to these schools?

When an Inuk walks into a school in Nunavut, they should be able to recognize themselves, their realities, and their lives in the language and resources used to teach them. Schooling should be delivered in Inuktut, in all subject matters, with curriculum that is Inuit-centric and with messaging that positively affirms Inuit identity.

In order to achieve our expectation of graduating Inuit from schools who are bilingual, bicultural and equitably skilled, we need to ensure that Inuit students can see themselves in all aspects of the school.

I truly believe that Inuit are trying our best in a world that does not affirm who we are, in a world that does not value our world views, in a world where we are trying to assert ourselves both as Inuit and as part of the global community. Sometimes our best may fall short, but that is why we must nurture and rely on our great cultural strengths. We need to maintain and strengthen our kinship systems. We need to highlight and celebrate the good in our communities. We need to remind ourselves how resilient and adaptable we are. Inuit kids need to hear positive messaging about themselves; they need to know that by fostering their cultural identity, they are making the world a richer place.

I have great admiration for Inuit who manage to graduate school given the odds stacked against them. We have undergone drastic changes within living history: our parents’ generation was living out on the land, and now we are functioning in a wage economy, going through school systems, using new technologies—and we must celebrate that.

Recall that those 90 French-speaking students in Nunavut have their own school in Iqaluit, built with funds from the Canadian government because French is an official language of Canada. Canada delivers $8,189 per francophone for language programs in Nunavut, while providing $186 per Inuktut speaker—meaning the federal government spends 44 times more on French in Nunavut than it does on Inuktut.

The message from Canada is that our language is not as important as English and French, that English- and French-speaking people in Nunavut are higher-level Canadians. Their languages and cultures are protected and promoted and funded and put into schools, put into books, put into curricula. Meanwhile, our language and culture have been left outside to wither and die.