Opinion: The mayor of Kingston on why we should take heed of the prescient president's 1938 speech in the Ontario city, and what it said about Canada-U.S. relations 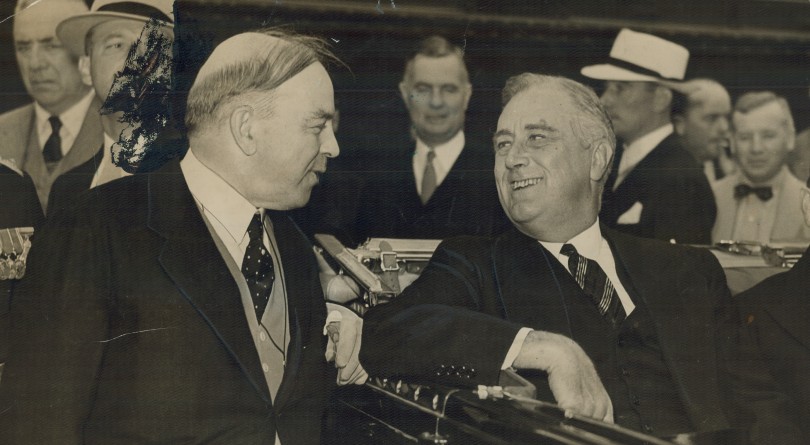 In this picture taken on Aug. 18, 1938, prime minister William Lyon Mackenzie King (left) met U.S. president Franklin Delano Roosevelt's 40-car procession at Kingston station upon his arrival in Canada to deliver a speech at Queen's University. 'No sooner had President Roosevelt's promise of aid from the United States to Canada, should it be threatened by an aggressor, been spoken at Queen's university in Kingston today than the whole empire applauded,' the Star wrote at the time. (Photo by Toronto Star Archives/Toronto Star via Getty Images)

Bryan Paterson is a professor of economics at Canada’s Royal Military College and is the mayor of Kingston, Ont.

It was August 18, 1938, and Franklin Delano Roosevelt, the beloved patrician U.S. president from Hyde Park, visited Kingston, Ont., a community located on the shores of Lake Ontario where it meets the St. Lawrence River. He was there to accept an honorary degree from Queen’s University, but it surely did not want for symbolism: Kingston, which sits roughly at the boundary line between Canada and America, was set to become a gateway between the two nations through the Thousand Islands Bridge that had started construction just a year prior.

“We as good neighbours are true friends, because we maintain our own rights with frankness,” he said after accepting the university’s honour, “because we refuse to accept the twists of secret diplomacy, because we settle our disputes by consultation and because we discuss our common problems in the spirit of the common good.”

As men and women cheered and applauded, Roosevelt made a pledge to Canadians that remains in place today, one that boldly defied powerful isolationists at home while the dark clouds of war marshalled ominously across the Atlantic—and one that is so foundational for both countries that no modern president or Canadian prime minister has dared undo it.

“I give to you assurance that the people of the United States will not stand idly by if domination of Canadian soil is threatened,” FDR said.

In the decades that followed, our soldiers have fought as one in Afghanistan, Korea and on the blood-soaked beaches of Normandy. Later, Canada and the U.S. helped found the United Nations and preserved the peace through NATO. Continentally, we made further history by crafting NORAD, an agreement that protects and defends North America still. By these bilateral acts, inspired by the never-ending quest to defend freedom, we’ve put very real substance behind Roosevelt’s words. That joint commitment remains strong and proud today.

After leaving Kingston, Roosevelt and Canada’s prime minister, William Lyon Mackenzie King, made the short drive to the border between New York State and Ontario. It was then their task to dedicate the International Bridge (later the Thousand Islands Bridge) linking Canada and the United States.

“This bridge stands as an open door,” Roosevelt said. “There will be no challenge at the border and no guard to ask a countersign. Where the boundary is crossed the only words must be, ‘Pass, friend.’ ”

And today, 80 years later, that bridge between our two countries proudly stands welcoming and open, just as Roosevelt and King envisioned. Hundreds of millions in trade and tourism dollars annually flow both ways. This traffic leads directly to increased prosperity, joint investment and the maintenance and creation of thousands of jobs on either side of the line.

It is a bilateral success story the rest of the world can only—and does—envy.

“[Canada] clasps the American hand with her faith and goodwill,” said Winston Churchill in 1939. “That long frontier from the Atlantic to the Pacific Oceans, guarded only by neighbourly respect and honourable obligations, is an example to every country and a pattern for the future of the world.”

A decade after President Roosevelt came to Kingston, his wife, Eleanor Roosevelt, also spoke here. Mrs. Roosevelt’s train stopped in Watertown, New York, where she was met by her Kingston hosts. The party then peacefully, and simply, crossed the same bridge her late husband had dedicated.

“In these troubled times, it is well to emphasize again how two nations have lived so many years side by side, with quick access to each other’s territory, and still have no fear of the misuse of this ready access into each other’s countries,” the former First Lady wrote about her trip to Kingston.

FDR’s trip here and the words he left for Canadians and Americans—and his wife’s words, years later—represent what is the best of Canada-U.S. relations. And there is arguably no better time to heed them.

At a time of tweets, tensions and uncertainty along the Canada-U.S. border, I remain confident about the bilateral future because of the steadfast and loyal friends Canada has always had south of us, and the words of a lion of a president some 80 years ago.

So, as I look to the future while our joint national leaders navigate a sometimes rocky present, I do so with confidence that our enduring friendship will forever be unshaken. Of course, accommodations will be made, compromises sought and NAFTA and other agreements fine-tuned.

But there is no weakness in that.

And I remain so optimistic because the clarion call of friendship between Canada and the United States rests upon permanent foundations.

Like those laid by Franklin Roosevelt in Kingston so long ago.