Political decision-making is speeding up, and that's bad for democracy

Opinion: Procedural fairness can slow democracy to a frustrating crawl—but this pace is vital for public scrutiny, reasoned deliberation, and a democracy's health 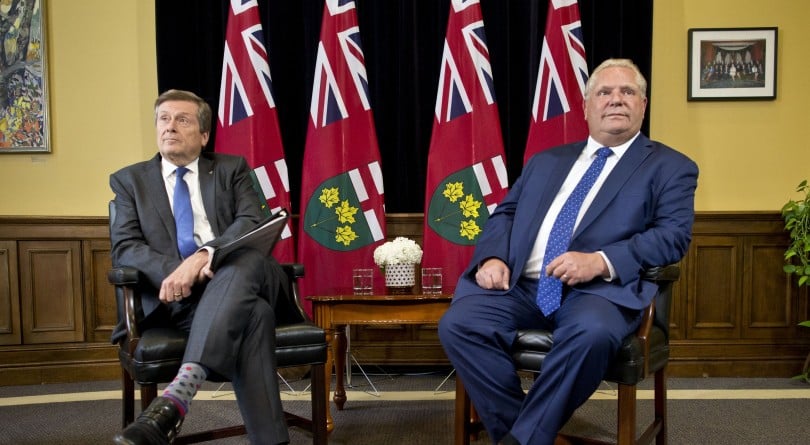 David Matyas and Mark Dance are law students at McGill University whose co-authored analysis has appeared in the Ottawa Citizen and iPolitics. Matyas has spent his past summers working at law offices in Iqaluit and on Bay Street while Dance has just completed summer employment at the Ontario Public Service. The opinions expressed in this article are those of the authors and do not reflect the views of any of the bodies with which they are or have been associated.

With less than three months to go before Torontonians head to the municipal polls, Ontario Premier Doug Ford’s unanticipated edict was a bombshell: his government would cut the number of Toronto city council seats from 47 to 25, throwing the race for City Hall into confusion and likely seeing many of his former municipal progressive rivals booted from office. It also discards the results of a review of ward boundaries that began in 2014, a process which involved the Ontario Municipal Board, councillors, and thousands of citizens.

It has spurred outrage and some protests, and highlights the nefarious ways in which legislation can be allowed to run roughshod over particular individuals and communities. But those who plan to challenge the substance of Ford’s legislative change are in for a rough ride: Section 92 of Canada’s founding document hands plenary power to the provinces over municipal institutions. And those musing about Toronto seceding from Ontario have perhaps overlooked the constitutional contortions that such a departure would entail.

But even where a legislature is accomplishing something that’s within its constitutional powers, it may still be acting unfairly. What Ford’s effort to use the legislature as a vindictive tool may yet reveal is the possibility of a subtler solution to what feels like legislative overstep: the integration of procedural fairness into the law-making process.

Procedural fairness is an intrinsic part of the Canadian legal order. It’s a set of obligations that apply to public authorities whenever an individual’s rights, privileges or interests are at stake. Criminal law is the classic instance of a fair process, where an individual whose liberty hangs in the balance has the procedural rights to be heard and to hear the case against them. The obligations also stretch into non-criminal administrative actions of the state: a government intending to fire an individual could have procedural obligations to hear the employee’s side of the story and a public authority seeking to deport someone may be required to provide reasons.

Though procedural fairness is core to law, it has not traditionally applied to the legislative process. While Canadian legislatures are governed by written procedures, they are not hard and fast rules or legal obligations; the cheerily named Better Local Government Act containing the changes to Toronto Council, for example, was not sent to committee for further study because a majority of the legislature voted to skip that one step that may have approximated public consultation.

And yet, sharp legislative shifts seem to land these days at a dizzying pace. In the age of partisan politics, a bill like the Urgent Priorities Act—which in one stroke forced striking workers at York University back to work, killed a wind farm contract nearly a decade old, and increases government oversight of HydroOne—has been described as the “legislative and political equivalent of toppling dictators’ statutes in public squares post-revolution.”

Here, procedural fairness could serve dual purposes. One, it would increase the likelihood of just decisions for those directly affected—the legislative equivalent of one’s day in court; and two, it would ensure that a sensible tempo prevails in political deliberations, giving citizens the time to consider and understand changes to the law. Effectively, it’s a procedural fix to some century-old bugs in our democratic system.

In the lawmaking context, procedural fairness could mean that a legislature like Queen’s Park would be required to give notice, accept submissions from affected parties, or issue reasons for their decision whenever they were targeting particular people or communities rather than legislating for the whole province. Obligations such as these could help procedurally protect a municipality from a unilateral restructuring like the one now facing Toronto, and would take the steam out of this steamrolling.

Procedural fairness would also shield others who could tomorrow find themselves at the mercy of vindictive legislative enactment, like religious institutions incorporated under statute, universities created by public Act, and honorary citizens whose status is confirmed and conceivably revoked by the federal Parliament. In each case, procedural rights would give these people and groups an institutional armour against arbitrary or malicious legislative attack.

We’ve seen people in Canada fight for that procedural fairness. In Northern Alberta, Harper-era omnibus amendments to environmental legislation have imperilled the Mikisew Cree’s treaty rights to hunt, fish and trap on traditional territory, and while similar moves made by executive action would have legally required the Crown to consult with the First Nation and consider adverse impacts, the Conservative government of the day accomplished an end run around the rules by pushing the changes through Parliament instead. The First Nation has brought their case to the Supreme Court of Canada, and the country’s highest court is now considering whether to grant them relief.

Though the Supreme Court may yet side with the appeal court and find otherwise, the federal trial judge ruled that Parliament owed the Mikisew Cree procedural rights—that, on the introduction of the massive government bills into Parliament, the First Nation should have received notice and should have been allowed to make submissions. This position aligns with a basic tenet of legal philosophy: that the likelihood of a just result increases when decision-makers are forced to go through the procedural motions.

A cynic might contend that procedural guarantees ultimately do little to change results. A legislature forced to give reasons for reducing the number of city councillors may still decide to eliminate the seats. A cabinet required to consult First Nation stakeholders when deciding on environmental legislation may still choose to roll out that statute. A “reasoned decision” cooked up by a majority government may be no easier to swallow than an unreasoned decision. But the democratic utility of procedural fairness stretches beyond results; procedural fairness can act as a metronome, steadying the pace of decision-making.

The early Ford premiership has been described as advancing a “rapid-fire approach to governing”; indeed, before the sun has set on the 24-hour news cycle of carbon pricing’s demise, the scrapping of the sex-education curriculum swallows it up. A decision to bin the basic income pilot project is eclipsed by an announcement to return “buck-a-beer” to the province. “Each story on televised news is ‘breaking’ until it is displaced by the next one,” writes historian Timothy Snyder. “So we are hit by wave upon wave but never see the ocean.” The result is akin to a collective concussion—a widespread amnesia that prevents voters and viewers from recalling the incidents that had outraged them a week earlier.

Procedural fairness can be a safeguard against this amnesia. It can simultaneously slow the pace of decisions while reanimating public consciousness as the legislature consults and gives reasons for its law-making—whether those laws are being pushed by a tired progressive regime heading for the exit or a bold conservative contingent burning through its to-do list after election day. While the slow pace of democracy can be infuriating, this cadence is vital to a system of government that includes public scrutiny and reasoned deliberation. This is especially so where individual rights and interests hang in the balance or where politicians would conceal their consequential decisions in a flurry of activity and bombast.

Ultimately, it will take a resourceful court to formulate and enforce a procedural legal obligation for legislatures. Simultaneously, it falls to citizens to speak out in favour of procedural fairness in legislatures; courts will hesitate to constrain a parliament if the move would prompt popular backlash or widespread accusations of judicial overreach.

In early-modern England, kings and legislators deployed Acts of Parliament as targeted attacks. A Tudor king could discipline a nun for denigrating his decision to divorce, a Stuart-era Parliament could punish revolutionary plotters without them ever standing actual trial. But no head of government in this country is a monarch and our legislatures are not simply vehicles for doing what cannot legally be done elsewhere.

It’s a creaky ship, our democracy—and politics brings waves and winds that shift and shake. Procedural fairness can help ensure we don’t capsize.