Reconciliation can't happen without truth. So why do some suppress it?

Opinion: Indigenous survivors of residential schools continue to be denied their truth by the ignorant—but also by those working toward reconciliation

A picture of Senator Lynn Beyak accompanies other Senators official portraits on a display outside the Senate on Parliament Hill in Ottawa on Thursday, Sept. 21, 2017. THE CANADIAN PRESS/Sean Kilpatrick

Veldon Coburn is a lecturer at McGill University and a PhD candidate in the department of political studies at Queen’s University. His research and writing focuses on Indigenous politics and policy.

There’s a foreboding tension in this age of Indigenous reconciliation that may not be altogether obvious, even for those who ardently support and participate in this ambitious venture. The tension is palpable for many Indigenous people as they find their heritage at the nexus of a struggle that is pulling in opposite directions—one in which they’ve found themselves to be mere spectators. In one direction, there is a fervour for a great leap forward, to take us all—Indigenous and settler alike—into a future that promises harmonious co-existence. In the other, there is a tenacious grip on the past, holding onto a place that secured privilege for settler society.

That’s on full display in Ottawa, in particular in the form of Lynn Beyak, the Canadian senator who was recently kicked out of the Conservative caucus for repeatedly asserting her disbelief in the truth of residential schools. Her denial of those horrors reflects the thinking of a demographic of people for whom the findings of the Truth and Reconciliation Commission are suspect, and “the residential school story is greatly exaggerated.” These folks insist they know the truth about Indian residential schools; only they know the truth about what Indigenous people don’t want you to know. That hidden truth, they tell us, is inconsistent with the narrative of victimhood propagated by Indigenous leaders to ensure endless apologies and compensation. They know about the secret bright side to genocide despite the unprecedented investigation and study of the Truth and Reconciliation Commission—an unmatched program of research and inquiry with a budget, time, data, witnesses and resources rarely enjoyed by even the most serious of scholars.

READ MORE: If we’re stuck with Lynn Beyak, let’s put her to good use

It is rather easy to rail against this bluntly wrong-headed mode of thinking. When deniers insist that residential schools were “good” and “well-intentioned,” as Beyak has, and draw a direct causal link between residential schools and the cultural riches produced by Tomson Highway, we should recoil at the implication of this position. Writing over the overwhelming empirical evidence of atrocities—rape, torture, and death of innocent children—with an anecdote of achievement is beyond the pale. This style of thinking is a cold, inhuman calculus that wholly discounts the moral worth of Indigenous children and the love and nurturing relations they had with their families and communities. Moreover, as writer Tim Fontaine rightly says, “While Highway’s example shows that there are indeed success stories … it’s important to remember they succeeded in spite of what the residential schools system did to so many others.”

But settler privilege comes in different packages. And Carolyn Bennett, the minister of Crown-Indigenous Relations and Northern Affairs, for example, has led the cheer on renewing relations between the Crown and Indigenous peoples. But she is not much different from Beyak in this way: both are emblematic of the colonial rejection of Indigenous perspectives.

Bennett has led efforts toward reconciliation and decolonization, if only nominally and without any semblance of substance, and appears to have fully embraced the notion. That is valuable. But in her ambition, the “minister of reconciliation” has stepped over Indigenous truth. In both the enthusiasm for and resistance to reconciliation and decolonization, we see the familiar colonial impulse to run roughshod over the moral claims and standing of Indigenous peoples. When it comes to the Indigenous perspective on the legacy of colonialism—particularly the unique history of Indian residential schools—they are wilfully ignoring it at best, and actively erasing it at worst. 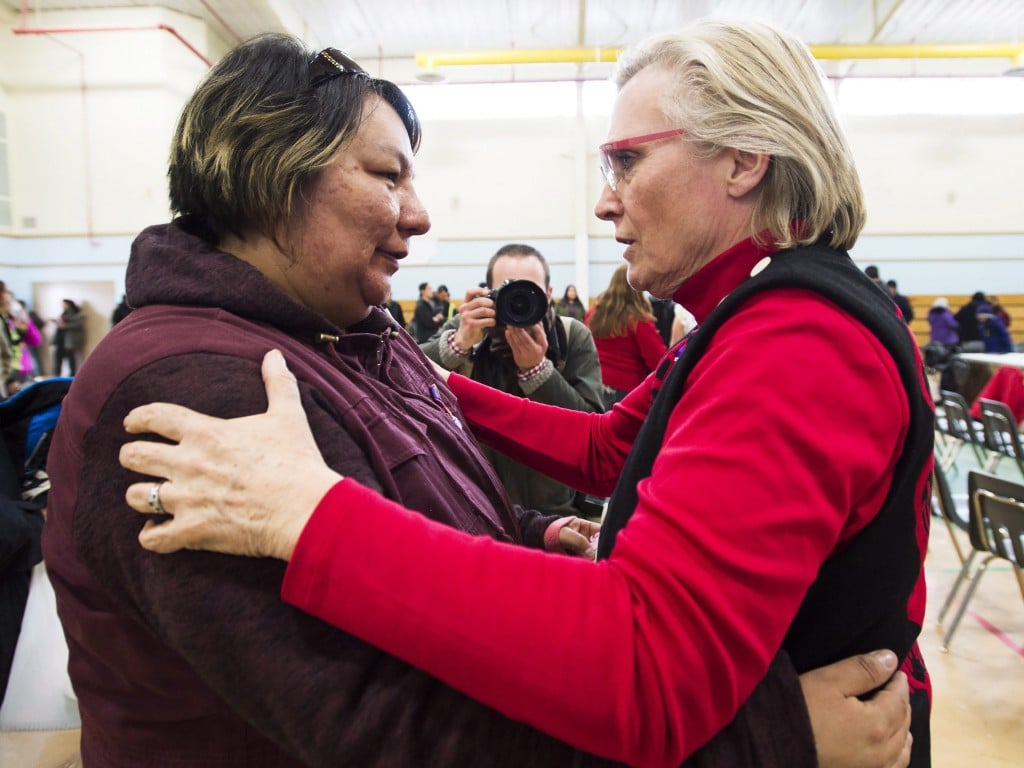 Carolyn Bennett, right, shows her support for Stephanie Hookimaw, left, who lost her daughter to suicide in 2015 in the northern Ontario First Nations reserve in Attawapiskat, Ont., on Monday, April 16, 2016. THE CANADIAN PRESS/Nathan Denette

In these past weeks, Bennett and her department have continued to frustrate residential school survivors in their quest for truth and justice by refusing to release thousands of pages of evidence that corroborate survivor accounts of the unspeakable abuse that occurred at St. Anne’s Indian Residential School, notorious for the use of a homemade electric chair that was used to torture Indigenous students. In response, Nishnawbe Aski Nation Deputy Grand Chief Anna Betty Achneepineskum has urged her to cease “suppressing and intimidating the voices and the stories that are the truth of this country.”

Other survivors of residential schools have continued to fight to have the truth of their own experience acknowledged. But, like the survivors of St. Anne’s, they too have also bore the brunt of the full force of the taxpayer-endowed, bureaucratic legal team. Indeed, in another matter concluded in Ontario Superior Court earlier this month, Justice Paul Perell ruled in favour of federal officials—lawyers of the federal bureaucracy—who sought to conceal more of the legacy of residential schools. At issue was the inclusion of the Fort William Indian Hospital Sanatorium within the ambit of the IRS settlement agreement. Bennett and her official contested this view and Justice Perell agreed, but not without commiserating with the survivors as he closed his ruling: “I sympathize with the situation of those who were transferred from IRSs to Fort William. These young people contracted serious illnesses while resident at an IRS, were subsequently diverted to the Sanatorium, and were away from their communities during times of significant health challenges, the very times at which children need their families the most.”

The tack taken by each of these sides in the settler struggle over reconciliation may pull in opposite directions, but they are both underwritten by the same, long-entrenched phenomenon: colonial arrogance of settler supremacy. There is no difference between the suppression of the truth and the denial of the truth. Both tactics—whether deployed to advance reconciliation or resist it—subordinate Indigenous people and their truth of Indian residential schools and the integral part this system of cultural genocide played in colonialism. Both reproduce colonial dominance and strip Indigenous peoples of the moral agency to speak about their lived experiences, to evaluate the good and the bad from their own view, and not have it imposed.

Indigenous peoples are acutely aware that their views, their existences, and their heritage have barely registered in colonial accounts of Canadian identity. The TRC offered the occasion to make Indigenous representations in their own voice, to allow survivors of residential schools to speak their truth. At the same time, survivors graciously extended an olive branch to Canadians. They asked Canadians to accept their truth so that we can all then move forward in reconciliation. But their truth had to come first—and it still does.

Sadly, settler inclinations—disparaging the integrity of survivors and distorting their truth—is stalling any meaningful progress on reconciliation. Neither the suppression nor the denial of the Indigenous view of legacy of residential schools will move Indigenous peoples and Canadians to a détente with our colonial history.