Adnan R. Khan: The Russians and Iranians are in full control now. But their victory will leave them dangerously exposed in a devastated country. 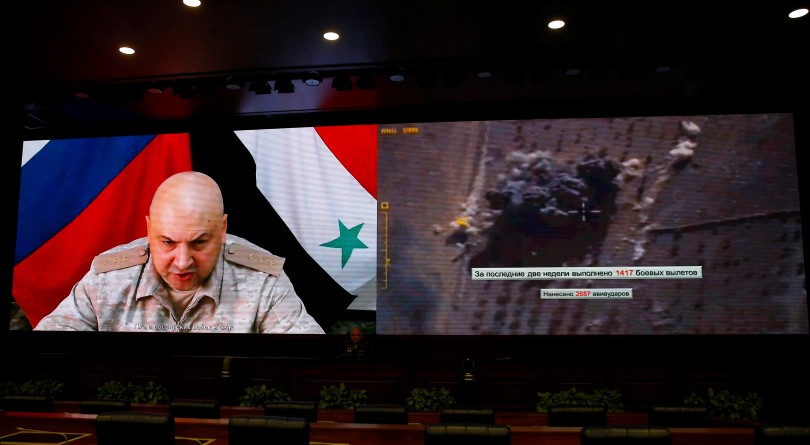 The commander of the Russian forces in Syria, Col. Gen Sergei Surovikin speaks to the media at the Ministry of Defence of the Russian Federation in Moscow, Russia on September 06, 2017. (Photo by Sefa Karacan/Anadolu Agency/Getty Images)

Updated Saturday at 12:40 p.m.: This story has been updated in the wake of the Friday announcement of joint U.S., France and U.K. air strikes on Syria.

As each day passes, it looks more and more like President Donald Trump’s policy in Syria is crashing up against the reality that the country is, for the time being, lost to Russia and Iran.

It must be a bitter pill to swallow for a man who, based on the only consistent theme in his twitter rants, believes that the U.S. is THE BEST! and its military THE STRONGEST! What he seems to be learning, in the slow, agonizing way Trump imbues knowledge, is that military might is no cure-all. At best, it’s an analgesic; at worst, snake oil.

Take the April 7 chemical attack on Douma and all the chest-pounding that’s followed. In the days after the attack, widely believed to be carried out by the Syrian regime, Trump was warning Russia to “get ready” for the “nice and new and ‘smart!'” missiles the U.S. would be sending to Syria. The American military, in concert with France, began to shift maritime assets equipped with said missiles in the direction of the Syrian coast in the eastern Mediterranean.

A day later, on April 12, Trump seemed to backtrack. “Never said when an attack on Syria would take place,” he tweeted. “Could be very soon or not so soon at all!”

Putting aside Trump’s penchant for theatre of the “YOUR FIRED! NO YOUR NOT! OR ARE YOU?” variety, the mixed messaging was telling. The last time the Syrian regime was accused of a chemical attack, on April 4, 2017, the response was swift. Three days later, U.S. warships launched 59 cruise missiles at a Syrian airbase. Most military experts agreed the strike was pointless. It did nothing to degrade the regime’s military capabilities or reduce its ability to use chemical weapons again. It was, in the end, all theatre.

This time around, the U.S. appears to be more thoughtful about its response but it is again realizing that its options are limited.

READ MORE: How Israel became a defender of the Syrian people

Hitting the regime is proving fruitless, primarily because it’s not the regime that’s winning Syria’s civil war; it is the Russians and the Iranians. Regime forces have repeatedly demonstrated their incompetence on the battlefield. To compensate, they’ve resorted to crude tactics like barrel bombs and chemical attacks, both war crimes, to terrorize rebel forces into submission.

These are acts of weakness, not strength. Without Russian air support and Iranian on-the-ground command and logistics, the regime would have lost the war years ago. But targeting the Russians or the Iranians raises a whole host of terrifying possibilities, including the dreaded escalation that could ignite open conflict between Russia and the U.S.

Neither country wants this, so neither country will let the situation get out of control and it looks now like things are heading toward de-escalation. On April 12, MSNBC reported that a source with knowledge of discussions between Trump and his National Security Council said the administration had narrowed its list in Syria to 8 potential targets for missile strikes, including two Syrian airfields, a research center and a chemical weapons facility. In other words, a limited military response similar to the one last year.

It won’t change much. The military options to keep the Syrian regime in check have evaporated. There are a variety of reasons for this, with all sorts of history and context, but the bottom line is, the Russians and Iranians are in full control of what happens to President Bashar al-Assad and his government.

A growing cadre of experts, however, see the centrality of the Syrian regime to Russia and Iran’s regional ambitions as a potential opportunity.

“The Russians and the Iranians have made such a strong commitment to Assad, I suspect they will have to support him for a long time,” says Ilter Turan, President of the International Political Science Association based in Montreal and Professor Emeritus at Istanbul’s Bilgi University. “But in the end, they may end up expending more resources in Syria than they ever imagined. They are not rich countries. They have significant economic weaknesses. They don’t have impressive domestic production capacities and make their money by selling gas, oil and raw materials to the world.”

So the question is: how long can the Russians and Iranians prop up Syria’s regime?

The answer to that question hinges on what comes next: as the civil war winds down and the opposition crumbles, how much control will the regime be able to exert over Syria? Ending the war will only be the first step. Next will come reconstruction and rebuilding the country’s devastated economy. It will be no easy task, particularly now that Assad and his cronies have become pariahs in the world.

“I would organize a guerilla campaign targeting first Russian contractors, then Russian soldiers using every bit of leverage I could get (establish a trusted network of spies and informers, paid if necessary),” he says. “I would strike fear into their hearts by targeting Russian flights landing in Damascus. I would organize a daring sea attack on Russian warships and submarines moored off the coast at their base in Latakia Province. Mini-submarines could penetrate the base and cause irreparable damage. For this, you need materiel, organization and daring. Syrian freedom fighters are capable of doing this and much more.”

As cavalier as it sounds, Mabley is not alone in suggesting an asymmetric war of attrition to bleed the Russians and Iranians. Others have noted that Russia’s involvement in Syria is not popular with Russian citizens. The longer it drags on, the more resources the Russian government expends there while it ignores the growing litany of problems at home, the less tenable its Syrian adventure becomes.

Similar arguments have been made about Iran. According to a 2017 World Bank report, Syria’s economic activity has all but ground to a halt. Upwards of three-quarters of what’s left of its population is jobless and the government is almost entirely dependent on Iranian hand-outs to keep itself running.

Meanwhile, Iran’s increasingly aggressive foreign policy has depleted its oil wealth, destabilizing its domestic politics. In December 2017, protests broke out in Iran after a draft budget was leaked to the public which showed massive cuts to government subsidies for the poor and a spike in funding for the military and religious institutions.

In the cold, hard calculus of military strategy, Iran and Russia are exposed. They’ve gone all in on a Syria that has been reduced to rubble. Like the Soviets in Afghanistan, it could prove fatal. But the tragedy of all this is that it will take time—many, many years—and the bulk of the suffering will be shouldered by civilians.

This is the grim reality of Syria: the only option on the table today—a stable country ruled by Russia and Iran—is unacceptable to global and regional powers. The only alternative is to force the Russians and Iranians out by turning Syria into another Afghanistan. It could work, but at what cost?

In the early morning hours local time on Saturday, the American, British and French militaries launched a coordinated volley of missiles on three targets in Syria. As expected, the attack was limited in scope, hitting Syrian regime installations—including a research facility near Damascus suspected of developing chemical weapons and two storage facilities near Homs—but carefully avoiding Russian and Iranian bases.

“We confined it to the chemical weapons-type targets,” General James Mattis, the U.S. Secretary of Defense, told reporters shortly after the launch of the strikes, underlining that they were a response to the April 7 chemical attack on Douma. “We were not out to expand this; we were very precise and proportionate. But at the same time, it was a heavy strike.”

There was some confusion, however, about the extent of the military action after President Trump said in his address that the strikes were part of a “sustained response.”

The contradictory messaging is typical of a U.S. administration that appears to have little by way of a coherent strategy in Syria. At every turn, it has been out-manoeuvred by others—primarily Russia and Iran, but also Turkey, which has walked a fine line by courting the Russians and Iranians while maintaining its shaky relations with U.S., a NATO ally.

It’s unlikely the strikes will have any meaningful effect on the trajectory of the Syrian conflict. After the chemical attack in Douma, the last remaining rebel forces in the area agreed to a Russian-brokered deal to vacate north to Idlib, where the Turkish military is monitoring a de-escalation zone that has ostensibly turned into a crowded holding cell for the vast array of rebel groups in Syria, including the Syrian branch of al Qaeda. That area and a swath of territory near the Turkish border where rebel forces backed by Turkey ousted the Kurdish YPG militia, which has nominally aligned with the regime, are the only notable pockets of rebel control left.

The regime has, for all intents and purposes, emerged the victor in the civil war. Turkey, meanwhile, has positioned itself as a potential dealmaker, vowing that it will turn over the areas it now controls to the regime, but only if its demands are met. The move is namely a promise that the Kurdish YPG, which it considers a terrorist group and an existential threat to Turkey, is eliminated.

Far from being the clear and emphatic message the U.S., Britain and France claim these strikes represent, the reality is that they instead demonstrate the degree to which these western powers have lost relevance in Syria. No doubt, the missiles provided a grand display of high-tech weaponry, but strategically, they amount to little more than fireworks.