The case for accountability, brought to you by the Conservatives

Andrew MacDougall: While the PM offers talking points from his driveway, the onus is on the opposition to make the case for proper scrutiny via Parliament 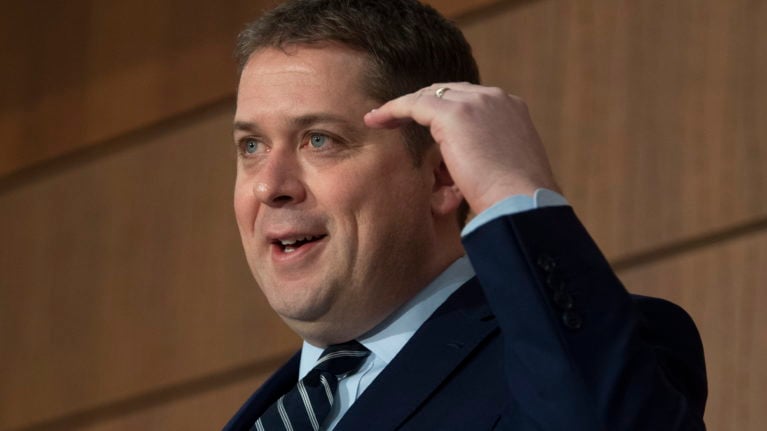 Scheer speaks during a news conference in Ottawa on April 20, 2020 (CP/Adrian Wyld)

Say this for the coronavirus: it leads to some pretty bizarre outcomes.

No, not the frantic and extraordinary reworking of Canada’s benefit system, or the mass public acceptance of stringent lockdown measures. That’s just the cost of doing the virus’s business. I’m talking about cats becoming dogs and dogs becoming cats.

Exhibit A: the importance of Parliament—and the scrutiny it provides—in Canadian public life.

If anyone had told you a few years ago the Conservative Party of Canada would be leading the charge for accountability via the House of Commons and the Liberals resisting it, you would have been kicked out of the club and told to stop drinking. Sure, the Conservatives are now the opposition, but overtly championing the role of Parliament in applying scrutiny? Actively singing Parliament’s praises? What’s next? The Liberals pledging to report back to Parliament quarterly on Canada’s Quarantine Action Plan and having Mike Duffy MC the first event?

And yet, here we are, relying on the Conservatives to champion the job everybody should want doing. With the Liberal government stretching the national balance sheet across the gaping cracks in the economy and weaving entire closets full of new policy on the fly, it’s Conservatives who are having to make the case over why Parliament should have a look over any of it. And until recently, it’s been the Liberal Party offering scrutiny’s excuses.

In one sense that’s understandable, what with the first Liberal bill combatting the pandemic containing an egregious bit of overreach. And then there was the thing the Liberals said the bill did that it didn’t do that Parliament then had to fix. Scrutiny often finds you with your trousers down and the Liberals would probably just rather get on with the business of throwing the kitchen sink at the economy. But that’s not really how this whole democracy thing works. Somebody has to mark the homework and Parliament should be all over this government’s response.

And given the volume of action being taken—and the huge sums involved—you’d think it would call for more scrutiny, not less, and the sooner the better. But as the past few days have proven, that’s far from a universal view, even if we now appear to have settled for 20 per cent in-person scrutiny via once-a-week sittings (with some virtual players to be named later).

Part of the resistance stems from the fact that Andrew Scheer hasn’t been the best advocate for his cause. And sure, the whole ‘we love Parliament’ routine might be a bit of opportunism, but since when is the onus on the opposition to prove why the government needs some kind of scrutiny? And since when do the media not absolutely tear into the government for playing hard to scrutinize?

To be sure, there is a public health emergency and we have to be careful about how Parliament operates. And yes, there was agreement weeks ago about a parliamentary holiday. But as the crisis unfolds it’s clear the world is going to be in a state of suspended animation for quite some time and so necessity is going to have to find a way to invent some proper scrutiny to cover off this extraordinary period in our lives. If other industries and institutions can find ways to operate during COVID-19 then Parliament can too, and it needn’t take weeks, or an opposition sh-t-fit, to make it happen.

Lest anyone forget, Justin Trudeau was first elected (in part) because he was in love with Parliament and accountability. Go back and read the 2015 platform; it’s stirring stuff. But now the great man deems it necessary only to roll from his living room to his driveway once a day to deliver scripted talking points peppered with partisan attacks in response to some questions from the press and we’re supposed to be okay with it? My, how we’ve let ourselves go.

And if you think that’s harsh, have a read of the Trudeau transcripts and tell me the last time the Prime Minister genuinely added value to the proceedings (or made news, for that matter). The early briefings might have been reassuringly meaty, but the Prime Minister has now gone full vegan, serving up one nothingburger after another, rarely adding anything to the press release he’s been sent out to read. It’s time for a different kind of accountability.

Because hundreds of billions are at stake, to say nothing of lives and future indebtedness. If Chrystia Freeland and public health officials can rock up to work together to face the press, then the Prime Minister can join her in taking a few bullets from their honourable colleagues in the House, i.e. the way our system was designed to hold them to account.

If the Conservatives are smart—bear with me—they’ll use this period to do a proper grown-up job of holding the government accountable. In other words, none of the usual shenanigans or rhetorical overreach. No memes or snarky asides. Scheer’s office should instead re-watch footage of Thomas Mulcair holding Stephen Harper to account over the Senate expenses scandal and use that as the benchmark.