The Democrats risk becoming the party of plutocrats

Opinion: Mega-donor Tom Steyer is asking Democrats to pledge to impeach Donald Trump. That's a problem for a party in need of big ideas. 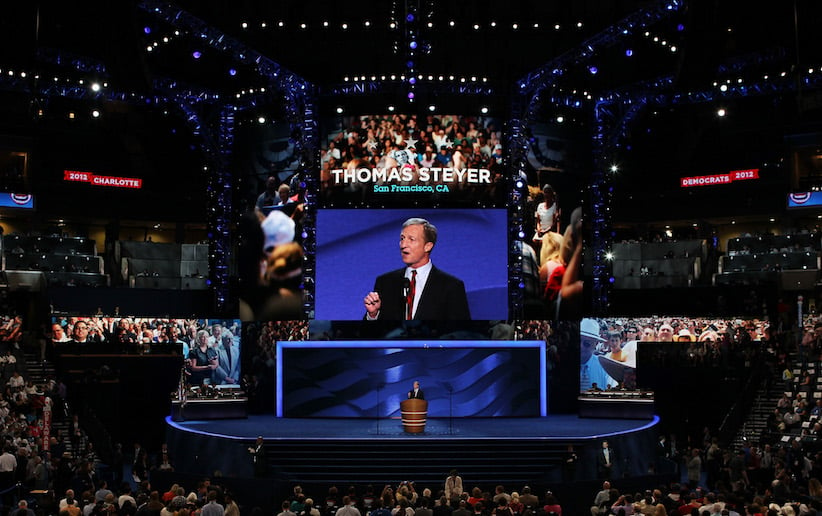 If you’ve ever had cause to wonder why America’s democratic institutions seem so hopelessly adrift these days, you need only consider the people who are currently running the show. No, not the Trump administration: long before America ended up with an “unraveling” chief executive, spurring fears of nuclear war, presiding over an administration that includes three men said to be in a “suicide pact,” we welcomed the plutocratic takeover of our politics, led by the original dotards: a cadre of dodgy, king-making billionaires with outsized power over the rest of the population.

Vox’s Ezra Klein has a succinct metaphor for where America finds itself right now: “The Doom Loop of Oligarchy,” in which massive wealth purchases great political power, which is then wielded in such a way as to yield more massive wealth, and so on. Once you’re hip to the Doom Loop, you can see the way it runs, as a subroutine in the background of our politics. It’s behind such matters as the repeal of estate taxes and monopolistic mergers. If you’re wondering why the GOP has been so bent on a politically suicidal repeal of Obamacare, which would create a healthcare crisis for tens of millions of people, it’s because their donors have let them know that the purse strings will remain tightened until they fulfill this mission. Political campaigns and policy-making have become hostage to the whims of weird billionaires and their dotty ideas.

And this week, billionaire Tom Steyer entered from stage left with one of the crazier ideas I’ve heard in many a day. As the New York Times’ Alexander Burns reported, Steyer penned a letter to Democratic Party officials demanding that Democrats standing for election in 2018 make impeaching Donald Trump “a defining issue in the 2018 midterm elections.” To that end, he wants Democrats to make a pledge that they will take the necessary steps to remove Trump from office, should they seize control of Congress. And given the fact that Steyer donated nearly $100 million in support of Democrats in 2016, they are going to have to at least listen to him.

The extent to which the Democratic Party has become influenced by their donor base is, perhaps, under-appreciated. After all, the party is nominally opposed to the Supreme Court’s Citizens’ United decision, which has brought billionaires to a new, steroidal primacy in American politics. And when it comes to signing on to strange pledges, the kingmakers who anoint each generation of Republican electeds seem to have an endless variety of odd demands, to which anyone who hopes to run for office must be subservient.

But in the wake of President Donald Trump’s election, it was to their allied plutocrat base that Democrats first turned for guidance and support—meeting behind closed doors, and in ring-kissing sessions with candidates for the job of DNC chair. And Democrats may be taking more inspiration from Trump than they care to let on, seeing as there is seemingly a new willingness among them to countenance the idea of running their own uber-wealthy supporters for top office. “There seems to be a feeling that we need to look beyond the normal folks we always look to, the normal types,” Democratic Governors Association executive director Elisabeth Pearson told Politico last December, alluding to inter-party discussions on the “need to look beyond the type of people who have been elected before, and look at who else might be out there.”

And so there has been endless talk about the electoral potential of everyone from Oprah Winfrey, Facebook’s Mark Zuckerberg and Sheryl Sandberg, Starbucks CEO Howard Schultz, Disney CEO Bob Iger, and Hyatt Hotel heir J.B. Pritzker. Steyer has himself been linked to many a political race, from the White House to the California statehouse to standing against California Senator Dianne Feinstein in her upcoming re-election bid. (I suppose Harvey Weinstein, another big Democratic donor, is out of the running now.)

Democrats can perhaps content themselves with the knowledge that they have the backing of the “good billionaires.” They’re not taking the money of those nasty Koch Brothers, after all! (Though Democratic elites do turn out when that money is, say, going to the David H. Koch Institute for Integrative Cancer Research at MIT.) But sooner or later, the worst ideas of the billionaire class rise to the top. Warren Buffett looks like a kindly old socialist when he’s despairing over how his underlings pay a higher percentage of their income in taxes than he—but less so when he’s helping to strong-arm Democrats into supporting bills that would deregulate the mobile home industry for the sake of feathering his already considerably gilded nest.

If there’s something nice to be said about Tom Steyer, it’s that his political goals don’t seem to be immediately related to any sort of greed-head aims. To this point, his traditional issue has been the environment, and Democrats have always been able to put his largesse to a productive purpose, as there’s a big environmentalist base out there that can be motivated to go to the polls. With his desired “impeachment pledge,” you can still discern something at least well-intentioned. As Burns reported, Steyer characterized Trump as “a clear and present danger to the Republic,” citing the president’s shady ties to Russian officials, his exploitation of the office for self-enrichment, and his “seeming determination to go to war.”

But tying Democratic office-seekers to an impeachment pledge is a reckless and cynical thing to do. Steyer doesn’t seem to appreciate the way a billionaire’s demand for the removal of an elected official might carry more than a whiff of illegitimacy, or the bad precedent it might set. He seems to not care that there is already an active and ongoing investigation into Trump’s inner circle being carried out by former FBI director Robert Mueller, which really doesn’t need some added layer of partisan politicization. He’s not appeared to have thought about what the impeachment of Donald Trump might actually achieve—a White House presided over by Mike Pence, who knows a lot more about how to use the levers of power and how to work with Congress than Trump does. And he doesn’t seem to remember that impeachment proceedings, on their best days, are still a dire national trauma. Perhaps Democrats want to talk more about how they’ll mitigate crises, and less about how they’ll exacerbate them.

But how does this one bad idea relate to the rest of the Democrats’ donor problems? In the first place, Steyer’s pledge is threatening to crowd out other ideas and discussions that the party would prefer to have. Much of what donors demand gets fitted into party messaging. Donors want to see the money they spend living out in the real world, and parties tend to mollify these demands by getting their preferred messages into ads and direct mailings.

So this is going to take up space and air-time. There will be less room to communicate big policy ideas and less focus on what the Democrats stand for. More media conversations are going to be tied to an impeachment pledge. More political ads are going to be stuffed with dire warnings about (thus far unproven) Russian collusion. If the Democrats’ message ends up being an endless welter of Putin and Russia and rumours and insinuations, it may be great for motivating the Resistance (which could not possibly need additional motivation), but it will poorly serve a broad class of Americans that the Democrats need to reach, and whose principal concerns are more related to jobs and money and opportunity.

And while, Steyer may want to put impeachment front and centre in the upcoming campaign, Democratic lawmakers—with a few notable exceptions—don’t want any part of that. As the Huffington Post’s Mike McAuliff and Laura Barrón-López reported back in May, Democratic electeds were endeavouring to exercise “genuine caution around something so momentous,” cognizant of the fact that “trying to use Trump’s current, not-fully-known troubles as fodder to remove him would actually undercut the seriousness of what Democrats fear the country is facing.”

In this way, Steyer’s ambitions are of a piece with what looks to be an emerging divide between Democratic elected officials and their donor base. As I’ve written before, Democratic lawmakers have been flirting with some bold ideas, among them a significant push in the direction of strong, trust-busting anti-monopoly laws. At the time, a fellow from the New America Foundation called it a “really big change in thinking.” Since then, that fellow—along with the entire Open Markets team—are now ex-fellows of the New America Foundation, their casting-out looking for all the world like Google, a big part of the Democratic donor base, called in a code red.

This is not to say that Steyer bears the Democratic Party’s more left-leaning economic voices any ill will. But there’s a battle brewing right now between the Democratic lawmakers who’ve sensed the needs of an electorate that they’ve lost to Trump and a professional-class donor base that’s enjoyed the party’s status quo. Steyer’s pledge would both exacerbate that divide and drive Democrats away from becoming what they need to become—a party of bold ideas.

Impeaching Donald Trump might bring some momentary satisfaction, but it fails to address a more pressing question: What’s next? That’s what Democrats need to answer in the upcoming election. And their donors either need to follow along—or stay out of the way.